A motorist "shot off" a fellow driver's middle finger, extended at her during a road rage incident on the Utah Freeway. 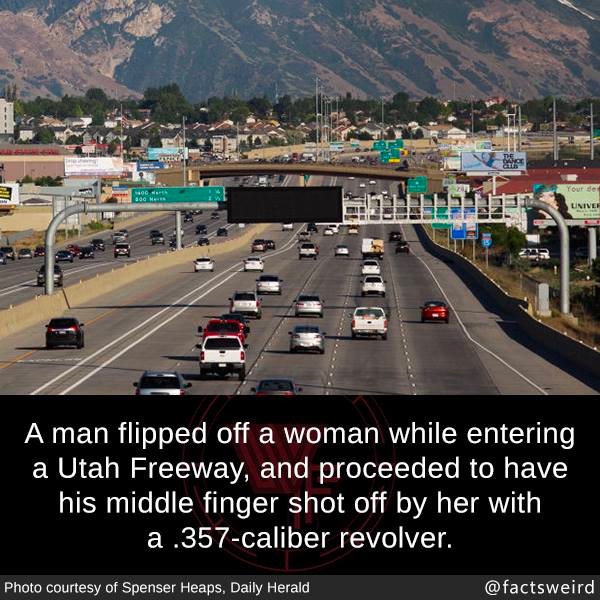 The image showed a four-lane motorway, and the text read:

A man flipped off a woman while entering a Utah Freeway, and proceeded to have his middle finger shot off by her with a .357-caliber revolver.

The original photograph appeared alongside a July 2015 Associated Press story about road signage in Utah, and it was accompanied by the following caption:

An electronic sign is seen over I-15 near Pleasant Grove on June 6, 2014. The signs show a variety of messages from UDOT, including a notification when Utah has had three or more days without fatalities on roads in the state.

However, the image was unrelated to any stories about a road rage shooting on a Utah freeway as described in the “Weird Facts” post. We were able to track down a far older Deseret News article titled “Road-rage bullet hits tip of a raised finger,” published in September 2005, which reported:

About 12:40 a.m., the 25-year-old man was waiting at 500 South for the light to change so he could get on the freeway, said South Salt Lake Police Capt. Chris Snyder.

As he waited, a woman in what turned out to be a stolen car pulled up next to him.

The two made eye contact, but there was something about the contact that made the man uncomfortable, Snyder said. The light turned green and the two cars entered the freeway.

On the onramp, the man told police, the woman began to drive aggressively and sped up to pass the man. In doing so, she hit some traffic cones that gradually closed some of the southbound lanes, Snyder said.

Somewhere between 2100 South and 3300 South, the woman rolled down the window of her car and yelled at the man.

So he made an obscene hand gesture.

That’s when she apparently fired four shots at the driver’s side of the man’s car.

The snippet of text in the January 2019 meme appeared to imply that the shooting victim was the aggressor in the confrontation, but the news story indicated that the shooter was driving what was later revealed to be a stolen vehicle. She did, however, shoot his middle finger off (or at least part of it):

One of the bullets hit the tip of the man’s middle finger on his right hand, severing it. His index finger also was injured, but not as seriously.

That bullet lodged in the man’s windshield.

In the above image, “Weird Facts” claimed  that a man flipped off a woman while entering a Utah freeway and “proceeded to have his middle finger shot off.” In 2005, the driver of a stolen vehicle fired on a fellow driver on a freeway onramp in Salt Lake City. Although bullets fired by the woman struck and severed the tip of the victim’s middle finger (and injured his index finger), she did not shoot off his entire finger.