In 2018, undocumented immigrants sent $56 billion dollars in "pure cash" back to their home countries.

Against the backdrop of a long-running federal shutdown, purportedly over border wall funding, a Facebook user shared the following 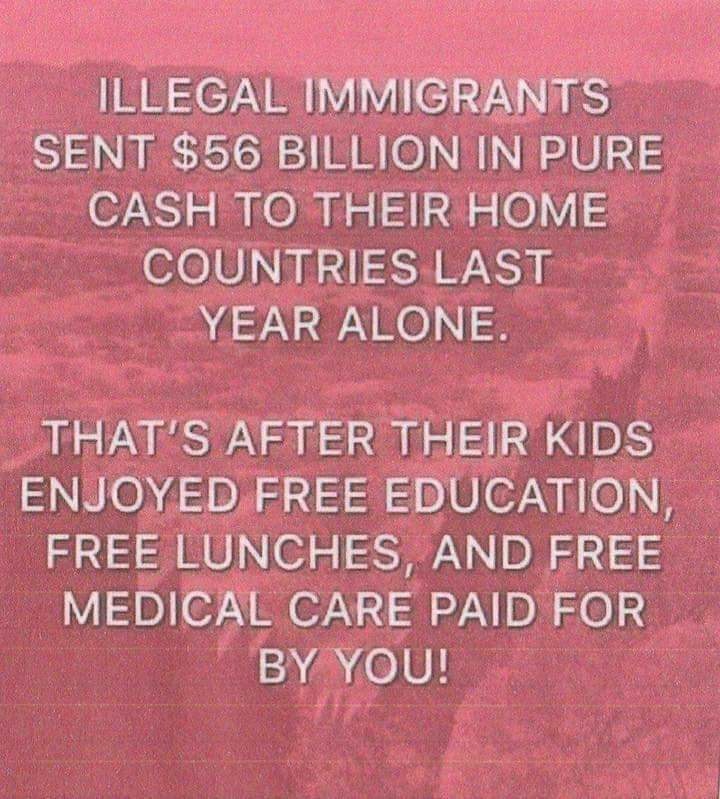 THAT’S AFTER THEIR KIDS ENJOYED FREE EDUCATION, FREE LUNCHES, AND FREE MEDICAL CARE PAID FOR BY YOU!

No citations accompanied these claims, which are twofold — one, that undocumented immigrants sent $56 billion to their countries of origin in 2018, and two, that the children of those immigrants were enrolled in school — receiving a free education, free lunches, and free medical care fully funded by American taxpayers.

In regard to the meme’s secondary claims, “undocumented children and young adults have the same right to attend public primary and secondary schools as do U.S. citizens and permanent residents.”

Undocumented immigrants do pay taxes in a number of ways; for example, few in the United States are exempt from sales tax, and roughly half of all undocumented people filed tax returns despite not having a social security number. In April 2018, Vox explained how the undocumented pay taxes at various state and federal levels:

I watched tax preparer Earvin Gonzalez go through the process of helping undocumented immigrants file their taxes. Maria, whose last name is being withheld because of her immigration status, handed him a folder with tax documents from two jobs. Her W-2 showed that a housecleaning company paid her $17,288 in 2015.

As Gonzalez filled out her information in a computer software program, a green box popped up on the computer screen: “Taxpayer’s Social Security number is not valid.”

That wasn’t a surprise … Instead [of a social security number], she has an Individual Taxpayer Identification Number (ITIN), created by the IRS in 1996 so people who aren’t allowed to work in the United States could still file taxes on any income they earned. (The IRS does not share ITIN information with immigration authorities.)

Maria said she applied for an ITIN number shortly after arriving illegally in the United States from El Salvador in 2009. People told her that having a record of paying taxes would help her with her case to gain legal status if immigration reform happened … It’s true that not all undocumented immigrants pay federal income taxes, because the government has no way to keep track of their under-the-table earnings. The IRS can withhold taxes from those hired with fake Social Security numbers, but workers who get paid in cash could simply choose not to report it, unless they voluntarily file a return with an ITIN number.

Still, all undocumented workers fund public schools and local government services by paying sales and property taxes like everyone else. The Institute on Taxation and Economic Policy estimates that they pay about $11.7 billion a year in state and local taxes.

The meme heavily implies that United States citizens carry the sole burden of funding education and school lunch programs, but that is not the case. Undocumented immigrants do get taxed and often file their own tax returns with the Internal Revenue Service (IRS).

With respect to “free healthcare,” it is not true that undocumented immigrants have access to programs providing it:

In a broad sense, the second portion of the meme suggested that undocumented immigrants somehow enjoy unfettered access to the United States’ safety net, a sentiment that is not supported by fact.

The meme’s primary claim, though, is that undocumented immigrants sent “$56 billion in pure cash to their home countries last year [2018] alone.” That number seemed to stem from a Wikipedia page, “Remittances from the United States.” Its first paragraph contained an important distinction, though:

International money transfers made by migrant workers and immigrants sending a portion of their earnings to their families in their country of origin are known as remittances. Remittances are an important aspect of the global economy, totaling an estimated $601 billion (USD) for the year 2015. The United States is currently the largest source of international remittances in the world, sending a total of $56.3 billion in 2015. Mexico received the largest portion of these remittances, accounting for an estimated $25.2 billion, making the U.S.-Mexico remittance corridor one of the largest in the world.

The figure of $56 billion matched the meme’s claims, but that number was attributed to monies sent by all “migrant workers and immigrants” in 2015. The year was incorrect, but the larger inaccuracy by far is the assumption that all immigrants and migrant workers are undocumented.

Most Americans, though, don’t know that. Pew asked respondents whether most immigrants in the United States were here legally or illegally. Only 45 percent said, correctly, that most are here legally. A slightly lower percentage, 42 percent, said illegally.

In July 2017, the United Nations International Fund for Agricultural Development released a report on the global impact of remittances, noting that they totaled 15 percent of immigrants earnings:

While [the sum of global remittances] might seem like a lot of money, migrant workers around the world earn about $3 trillion a year and only about 15 percent of their earnings are sent back home. Altogether about 200 million immigrants — equally divided among men and women — around the globe send money to their families. About 800 million people around the world are directly supported by remittances.

The majority of the money sent to home countries is usually spent right away, the report said. About 75 percent of remittances are used to cover basic needs such as food, shelter and recurring bills. Another 10 percent of remittances are used for things like education and health, while the remaining 15 percent is used for savings and investing in businesses or real estates.