Due to a government shutdown continuing into January 2019, tax refunds would be delayed or suspended.

On December 22, 2018 the United States government shut down, suspending the functions and payrolls of numerous federal agencies. As the shutdown continued into January 2019, concern and rumors began to spread over whether tax refunds issued by the Internal Revenue Service would be delayed — or suspended entirely.

News and gossip site The Shade Room published a Facebook post claiming that tax refunds would not be issued during the 2019 shutdown: 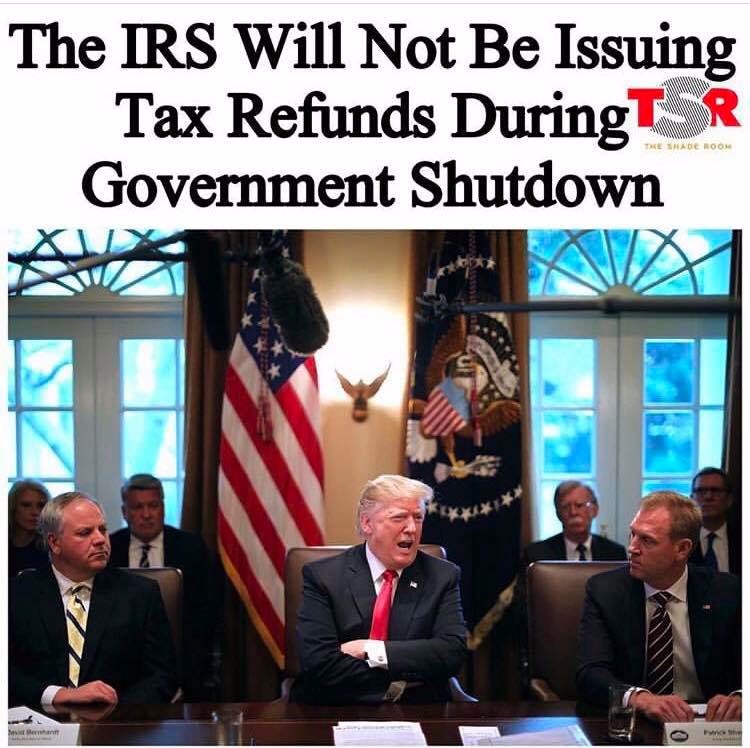 An article published by the same site on January 4, 2019 said that apparently, refunds would not be issued:

#Roommates, we may have a huge issue on our hands if the government shutdown continues into tax season. We all know what time it is, time to get that tax shmoneyyyy after a long year of working! But there may be a plot twist and doesn’t look to be in our favor #Roommates!

Ironically, because of the shutdown, the IRS now lacks funding and under the shutdown plan, is only operating with about 1 in 8 employees (12.5%) according to @Wallstreetjournal. Apparently, during the shutdown the IRS doesn’t perform audits, respond to questions outside of filing season or process refunds.

The good news is is the shutdown is resolved in a few weeks, then all of this will have little effect on our tax refunds. The bad news is, lawmakers have made very little progress on movement toward a deal. To add insult to injury, if you owe on your taxes, you’d still need to pay by April 15th.

The wording of the article did not allay concerns for those who rely on anticipated tax refunds for essential expenses, suggesting that the “good news” included a purported resolution in “a few weeks” — but that parties to the impasse had made very little progress to resolve it. The article concluded by observing that the purported suspension of tax refunds could get “interesting” (probably not a word that interested parties want applied to their tax returns) and no additional information about the status of the IRS was included.

The Shade Room’s article diverged from other coverage of the potential effects of the shutdown on the IRS’s ability to process tax refunds. Two days later, WBNS-TV reported that the current conditions were unprecedented:

The Internal Revenue Service is one of the many federal agencies that has closed its doors since Dec. 22 [2018]. Only 12 percent of its staff are working — without pay — mostly focused on security and technology. The agency is not issuing refunds, updating tax forms or answering phone help lines, according to its shutdown plans … Anyone hoping that an IRS shutdown means getting a breather on their taxes will be disappointed. The agency’s website says taxpayers “should file and pay their taxes as normal.”

In the last two years, the IRS has announced on Jan. 4 or 5 the date that people can start filing their taxes electronically, usually in the second or third week of January. As of [January 4 2019], it’s unclear when filing season begins. The IRS wasn’t immediately available for comment.

There’s no precedent for the IRS being shut down so close to tax season, added Mark Mazur, a former tax policy official at the Treasury and current director of the Tax Policy Center. The one that comes closest is the 27-day government shutdown in 1995, which stemmed from a conflict between Democratic President Bill Clinton and the Republican-controlled Congress. That impasse ended on Jan. 6, 1996.

CNBC did not get a comment from the IRS about what the shutdown might mean for Americans awaiting tax refunds, and also noted that concerns about changes to tax codes plagued tax preparers before a shutdown loomed. With both complications in full swing, tax experts admitted that no one was quite sure what to expect:

A shutdown at this point of the year could have an even greater impact on taxpayers because they’re about to file for the first time under the new Tax Cuts and Jobs Act.

The new tax code took effect a year ago.

In 2018, it nearly doubled the standard deduction to $12,000 for singles and $24,000 for married couples filing jointly. The law also curbed a slate of itemized deductions, and placed a $10,000 limit on the amount of state and local taxes filers can deduct.

In addition, taxpayers are also dealing with new forms. Your Form 1040 now will be “postcard sized,” but you’ll still need to work through pages of schedules to calculate other tax breaks.

The Washington Post noted that food stamps issued under the Department of Agriculture’s Supplemental Nutrition Assistance Program (SNAP) were potentially affected for the duration of the shutdown. Vox added an explanation to their coverage of increasing worries over 2019 tax refunds:

The short version: If the federal government shutdown doesn’t last too much longer (that is, if it ends in the next couple of weeks, before mid-January [2019]), there shouldn’t be a noticeable effect on getting your tax refund or any other processing. That’s because the Internal Revenue Service (IRS), which handles federal taxes, wasn’t planning on tax season fully starting until later in January [2019], anyway. And once the IRS begins accepting tax returns, you’ll still be able to mail them in or submit them online even if the government is still shut down.

But if the shutdown drags on longer, there could be delays and other serious problems at the IRS. For one, the IRS’s contingency plan only explained how the agency would handle the first five business days — through December 31 [2018] — of a shutdown. As a shutdown lasts longer, the agency will have to rework its plan, and head into more uncertain territory that could demand, for example, that agency employees show up to work without pay.

Marketwatch indicated that as long as the government remains shuttered, tax refunds will not materialize:

The IRS will continue to accept returns, as well as tax payments, but it won’t issue refunds during the shutdown. The impact this will have on taxpayers during the 2019 tax season will be significant if the shutdown extends for the next few weeks, but could even affect some taxpayers now — primarily, individuals who filed amended returns and businesses who have unique filing deadlines, said Tim Steffen, the director of advanced planning at financial-services firm Baird.

News outlets relied on informed speculation and comment by tax preparers and others with knowledge of tax return deadlines, most of whom anticipated significant delays in the processing of tax refunds in 2019, but no one had firm answers about exactly what taxpayers could expect — but their consensus did not appear to include timely tax refunds.

On the afternoon of January 7, 2019, the acting director of the White House Office of Management and Budget told reporters that tax refunds would be issued should the government remain shut down:

“Tax refunds will go out,” the acting director of the White House Office of Management and Budget, Russell Vought, told reporters at a briefing on Monday.

In previous shutdown contingency plans, the IRS would accept tax returns during the filing season, but refunds would be delayed until the government was funded. Vought said the administration is fixing what he called a problem faced by past administrations.

The decision will come as a relief to many taxpayers who file their taxes as soon as the filing season begins to claim their refund checks, which averaged $2,899 last year. Within the first week of the 2018 filing season, more than 18.3 million people claimed about $12.6 billion in refunds. The IRS hasn’t yet announced the start date to file tax returns this year, but says it’s on track to begin in late January or early February [2019].

Although Vought said tax refunds would not be suspended, whether they would be processed in a timely fashion was not yet known and no start date for filing was disclosed.