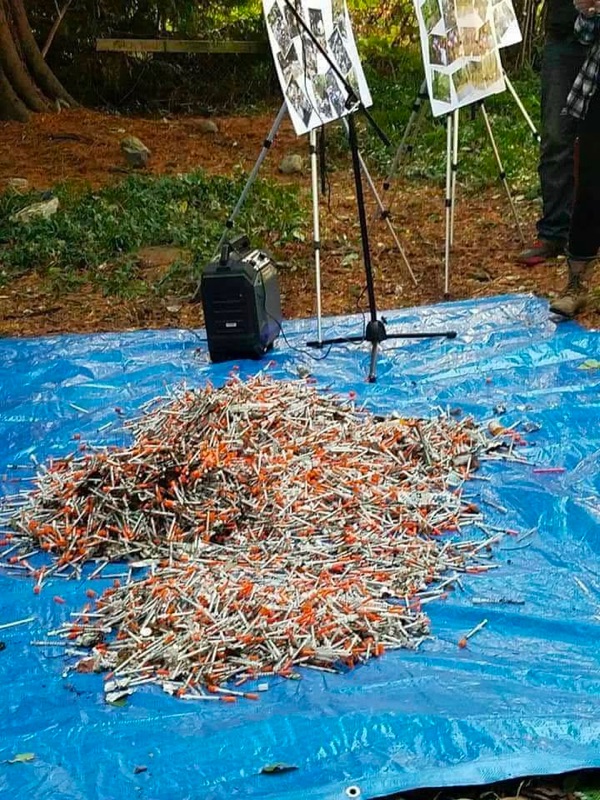 As of January 4, 2019, the image had been shared thousands of times. Angry users commented on the photograph:

paid for by these cities! give them free drugs and needles! WTF is wrong with people! thanks democrats!

This is the new world order that the UN and the LIBERALS promised!! How are you liking it??

The libtards logic is to ban PLASTIC straws but give out PLASTIC syringes….you can’t make this shyte up 🤡🤪🤪

As it turned out, you can (and apparently did) just make it up. A reverse image search proved that the photograph was captured in Everett, Washington, as part of a larger six-month-long effort to keep dirty syringes off the streets:

One million used syringes were collected in six months this year by a Snohomish County needle exchange, according to new figures from the local health district.

Stray needles have become a symptom and a symbol of the nationwide opioid crisis. Recovering addicts spent days cleaning nine tons of garbage and thousands of heroin needles from their former home, a patch of woods behind a Home Depot south of Everett.

Robert Smiley stayed in the camp years ago, when he abused alcohol and smoked crack. He dumped a bucket of 7,624 needles onto a tarp [in October 2017], to show how many carpeted the ground days ago.

The needles shown in the photograph were collected in a wooded area behind a Washington State Home Depot, and did not come from the streets of San Francisco; furthermore, they were collected over time and displayed as part of a press conference to offer a visual representation of the opioid crisis. That image was then stolen, mislabeled, and reappropriated in order to make a political point.