On October 26 2022, a popular Reddit post suggested that a Florida attorney known for opposing helmet laws had died in a motorcycle crash:

That post appeared on Reddit’s r/LeopardsAteMyFace, a subreddit for stories about individuals “suffering consequences from something they voted for or supported or wanted to impose on other people.” An additional section of the subreddit’s sidebar explained its name originated with a 2015 tweet about the “Leopards Eating People’s Faces Party”:

'I never thought leopards would eat MY face,' sobs woman who voted for the Leopards Eating People's Faces Party.

On October 26 2022, two additional iterations of the claim appeared on Imgur. One involved a tweet, and the other appeared to depict part of a Newser.com article: 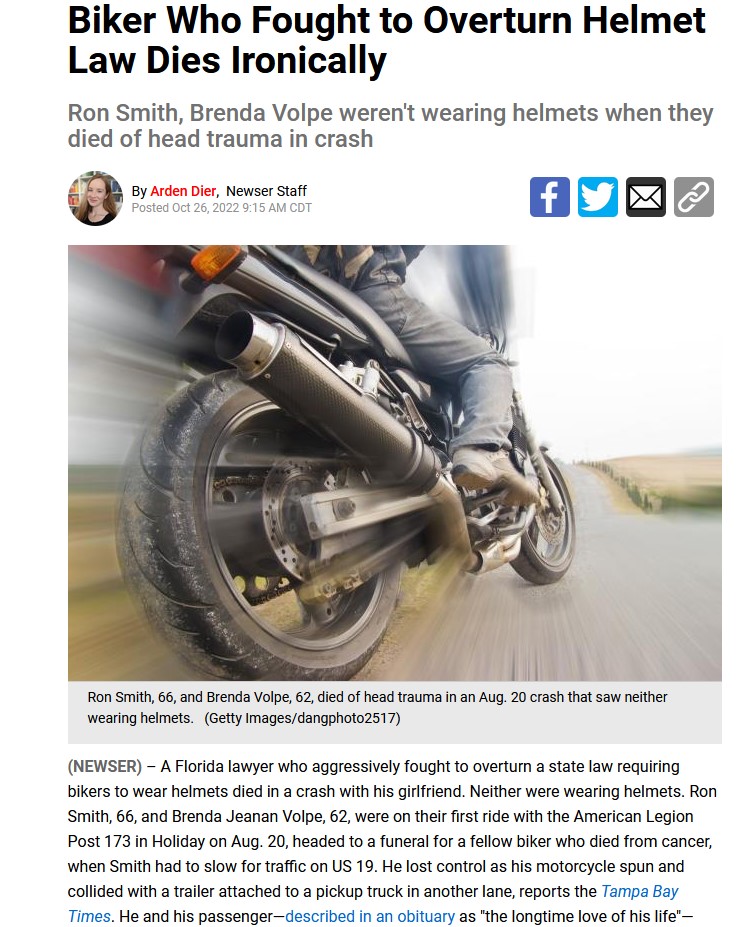 Both Imgur posts included visible dates on the images, and the item depicted in the above screenshot was published on October 26 2022. Titled “Biker Who Fought to Overturn Helmet Law Dies Ironically,” it began:

A Florida lawyer who aggressively fought to overturn a state law requiring bikers to wear helmets died in a crash with his girlfriend. Neither were wearing helmets. Ron Smith, 66, and Brenda Jeanan Volpe, 62, were on their first ride with the American Legion Post 173 in Holiday on Aug. 20 [2022], headed to a funeral for a fellow biker who died from cancer, when Smith had to slow for traffic on US 19. He lost control as his motorcycle spun and collided with a trailer attached to a pickup truck in another lane, reports the Tampa Bay Times. He and his passenger—described in an obituary as “the longtime love of his life”—died of head trauma, according to autopsy reports.

It wasn’t clear why the story became newsworthy in late October 2022, a little over two months after the crash occurred. After the regional news story began circulating, other outlets picked it up.

Newser aggregated October 25 2022 reporting by the Florida-based Tampa Bay Times, “Attorney who fought Florida helmet laws died in motorcycle crash while not wearing one.” It began:

In the late 1990s, when Florida bikers were still required to wear helmets, Pinellas lawyer Ron Smith was an aggressive advocate for overturning the law.

Smith was a member of ABATE — A Brotherhood Against Totalitarian Enactments and American Bikers Aimed Toward Education — which lobbied against the law for years. He represented clients who ran afoul of Florida’s motorcycle requirements in court cases that some say helped overturn Florida’s helmet law … In 2000, Smith’s aspiration was realized when the Florida Legislature passed a law allowing motorcyclists over 21 to go without head protection as long as they had $10,000 in insurance coverage for motorcycle accident injuries.

According to the outlet, Smith and Volpe both died in an August 20 2022 accident en route to the funeral of a friend. As was often noted in social media posts, neither wore a helmet at the time of the fatal motorcycle crash:

It’s impossible to say whether a helmet would have prevented Smith’s and Volpe’s deaths, experts said. Smith’s autopsy report lists blunt head trauma as his cause of death and an initial report from the Hillsborough Medical Examiner’s Office also lists Volpe’s cause of death as head trauma.

“It’s entirely possible that if they were wearing a helmet they might have survived, but again, we can’t say for sure. It certainly would have improved their odds,” said Eric Teoh, who has researched motorcycle safety at the Insurance Institute for Highway Safety.

On October 26 2022, a popular Reddit post suggested a Florida lawyer known for his strong opposition to helmet laws had died in a motorcycle crash. One day earlier, the Tampa Bay Times reported the circumstances of lawyer Ron Smith’s fatal motorcycle accident. Smith and a passenger were killed, and neither wore a helmet.