A "post from many other truckers" is authentic and accurately reflects all truckers' feelings about unrest in all fifty states as of early June 2020.

On May 31 2020, an open letter was shared by the Facebook page “Uncle Sam’s Misguided Children” (archived here), purportedly speaking for all or most American truckers in the midst of ongoing protests in all fifty states:

Within days, the post had been shared more than half a million times. Alongside an unspecified image of halted traffic and a line of individuals across the road, text attributed to “many other truckers” read:

DEAR AMERICA, WE ARE SERIOUS…

We will defend ourselves everytime, up to and including, using our 80,000lb trucks and it’s 1,800 foot-pounds of torque to run you over.

Cities where looting, rioting, and stopping trucks is happening…. You are hearby put on notice.

Threaten, delay, attempt to stop a truck, we… The American trucker will consider that act as an attack on our lives. We will defend ourselves, our equipment, and our load.

Food, medicine, hospital supplies, gasoline, and a million other daily items we deliver to your cities ARE A-POLITICAL. Everyone needs them, including your dumbass. We don’t “need” to come to your lawless city. YOU NEED us to deliver your food and supplies to your city.

We drivers have social media too. If your city becomes too chaotic and violent. Becomes too unsafe for us… Word will spread very quickly amongst the 3.5 million truckers. We will stop delivering to your city. Period. No driver will travel into a city that reminds us of scenes from a “Mad Max” movie.

Threaten an American truck driver while he’s working and it will take you, and your city, down a path where YOU WILL LOSE.

Keep your silly shit off the US Interstate and US highway system. Congregating in the roadway will only get you run over. Having people standing and blocking the highway is a threat to our physical safety and we will respond appropriately to your attack. Standing in the roadway is NOT a protest. It is an attack on our safety. Air horns will sound, steering wheels will be held tightly, but those brakes will not be touched. You will move, or you will die. 80,000 pounds at 70mph will win every time. STAY OUT OF THE ROADWAY.

In closing: DONT FUCK WITH THE AMERICAN TRUCKER! 🇺🇸

The oblique and direct threats to protesters and the letter’s commentary appeared to resonate with Facebook users — particularly users opposed to the protests which, as of June 2 2020, had spread to every state.

No information is offered about the writer of the letter, and despite its virality, no one stepped forward to claim authorship of the popular message. In its first few paragraphs the name of Reginald Denny was evoked, as though only truck drivers would be aware of Denny’s notoriety. In fact, Denny became nationally known during the 1992 Los Angeles riots when he was pulled from a truck and beaten, and many Americans old enough to remember the unrest that year remembered Denny’s name.

Moreover, the letter appeared to suggest truckers, en masse, were opposed to the protests. Truckers are not nearly as homogeneous and in lockstep as the letter suggested; a 2019 Census.gov article about the demographics of truck drivers in the United States included a graph indicating that younger truckers were far more diverse than the broader population: 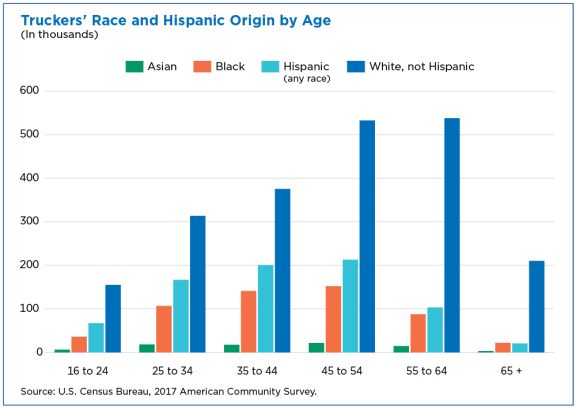 Incidentally, formal trucking associations had issued statements as unrest spread across the United States. In one such comment, a company’s safety director explained how truck drivers were navigating spontaneous protests along their routes:

[Jeff] Bessent, safety director for Chicago-based M&J Intermodal Inc./Eagle Intermodal Inc., said the safety department and dispatchers have been in constant communication with his 140 drivers about the planned protest.

“We are staying off the interstates as much as possible and we are watching all of the road closures that are going on and following all of the advice that the Illinois Trucking Association and the Illinois State Police are providing to us, as well as the Chicago Police Department,” Bessent told FreightWaves. “Right now, we are trying to move all of our freight as early in the morning as possible to avoid running in the afternoon and evening hours.”

Peaceful protests and civil unrest have continued to rage for eight days in many major cities, including Chicago, following the death of George Floyd, who died while being restrained by ex-Minneapolis police officer Derek Chauvin. Chauvin has since been charged with third-degree murder and second-degree manslaughter.

The Illinois State Police is advising truckers and motorists to check its main Twitter page for interstate and exit closures. It is also sharing safety tips, including avoiding locations with active police activity and protest areas, as well as abiding by cities’ curfews.

Truck drivers were aware of the protests and changing their routes, not barreling through crowds out of frustration (with at least one notable exception.) Bessett said that none of his drivers reported protest-related disruptions, and he added:

“I don’t mind protests. I am all for it because I did my time in the military and fought to defend this right for everybody else,” he said. “I am just as upset by what happened to Floyd as everyone else, but I don’t support rioting and destroying property. It’s only going to make the situation worse.”

Others in the trucking industry voiced concern for the safety of truckers and protesters, firmly agreeing with the latter:

Ronnie Sellers of Knoxville, Tennessee, said he sees the importance of trucker safety from both sides — as the former owner of a small trucking company and from a law enforcement perspective.

He spent 30 years as a police officer before retiring as a captain of the Alcoa Police Department in Alcoa, Tennessee.

After watching some of the riots unfold in Minneapolis and St. Louis, Missouri, as well as in other areas across the country over the last eight days and involving truck drivers, Sellers says there’s nothing in the back of those trailers that’s worth risking a driver’s life.

“Forced dispatch or not, you can’t drive into a riot situation because you are going to lose,” Sellers told FreightWaves.

As a former law enforcement officer, Sellers said he carried a firearm with him in his cab throughout his trucking career. However, he admits it’s not that simple for other truck drivers.

He urges peaceful protesters and truck drivers to follow curfews that city officials have established in several U.S. cities to avoid getting caught in the crossfire amid reports of looting and vandalism.

“After curfew, it’s hard for law enforcement to differentiate between the good guys and the bad guys,” Sellers said.

Protesters have been demonstrating against police brutality for over a week after Floyd died while being restrained by ex-Minneapolis police officer Derek Chauvin. Chauvin, who has been charged with third-degree murder and second-degree manslaughter, was videoed by a bystander holding a knee on Floyd’s neck for nearly nine minutes, during which time Floyd repeatedly claimed that he couldn’t breathe.

Sellers said he was outraged after watching the footage.

“I don’t think there’s anybody on this earth that wasn’t upset when they saw the video of what that officer was doing to George Floyd,” he said. “It was awful. He [Chauvin] is a bad cop and he didn’t care about that man at all.”

Another odd element overlooked by the purported trucker author of the open letter shared by the “Uncle Sam’s Misguided Children” Facebook page was then-recent labor disputes between the government and truck drivers. Earlier in May 2020, CNN reported United States President Donald Trump’s acknowledgment of trucker horns honking during his Rose Garden appearance:

When blaring truck horns intruded on President Donald Trump‘s [May 2020] speech in the White House Rose Garden about the search for a coronavirus vaccine, Trump claimed that this was the sound of a pro-Trump protest.

“And you hear that outside, that beautiful sound — those are truckers that are with us all the way. They are protesting in favor of President Trump, as opposed to against,” Trump said. “There’s hundreds of trucks out there, and that’s the sign of love. Not the sign of your typical protest. So I want to thank our great truckers. They like me and I like them.”

Those truckers were, in fact, doing the opposite:

Facts First: All three of Trump’s claims were false. The truckers who have lined streets near the White House since May 1 [2020] are indeed protesters, not people holding any kind of celebration — and they are protesting a variety of issues affecting their jobs, not protesting in favor of Trump. In fact, one of their complaints is about what they say is lax federal enforcement of a regulation requiring more transparency from freight brokers.

The truckers’ grievances are numerous and varied. They include what they say are unfairly low freight rates during the coronavirus pandemic, price-gouging by the brokers, ill-conceived safety regulations and permissive federal attitudes toward the autonomous vehicles that threaten their occupation.

On trucker, Greg Anderson, spoke to CNN about the claim made by Trump. Anderson, who had been on the road in that job for 33 years, said that Trump had “lied on national television,” adding:

In short, as of May 2020, truckers themselves were taking time out of their busy schedules to protest conditions. Disinformation page  Uncle Sam’s Misguided Children” once again shared an unsourced and corrosive piece of propaganda, likely not written by any truck driver and in an effort to incite further violence, which was shared largely by people who opposed the protests. It was true at least one trucker had a run-in with Minnesota protesters, but far from true that all or most truckers were likely to agree with the forwarded missive circulating on Facebook.