NYPD officers began obscuring their badge numbers with black bands during protests over the death of George Floyd, claiming it was COVID-19 related.

As protests over the death of George Floyd (and many other deaths of Black Americans at the hands of law enforcement) spread to all fifty states, a Facebook post claiming that the New York Police Department (NYPD) officers had obscured their badge numbers with black bands during the protests began circulating on Facebook.

Alongside a screenshot of a tweet by Dermot Shea, Police Commissioner of the City of New York (date not visible), the post simply read:

oh my god this is real. they really tried it. hiding badge numbers out of respect for covid.

The post spread virally on Facebook without a date attached. It was later edited to add information, but not before many users were exposed to the original post.

That tweet was real and visible on @NYPDShea’s timeline. However, it was published on April 16 2020. George Floyd was killed on May 25 2020:

New Yorkers may begin to see our officers with black mourning bands across their shields—and across their hearts. We wear these in quiet commemoration of our 27 brothers and sisters we’ve lost to #COVID.

Another way we honor our vow to #NeverForget. pic.twitter.com/JiPo0SVOqc

Initial and voluminous comments on the Facebook post indicated those commenting and sharing were unaware of the tweet’s actual posting date: 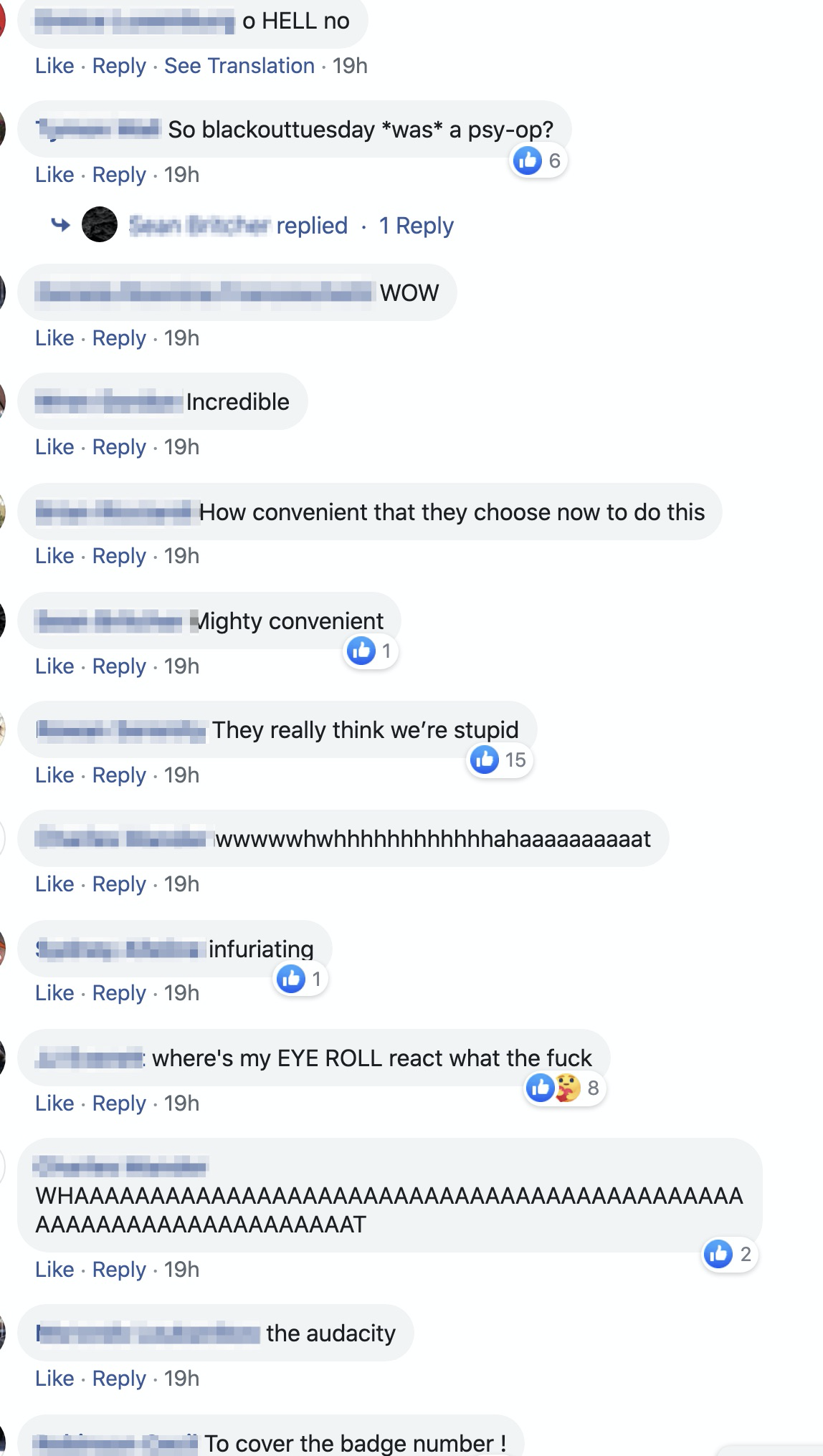 Eventually, commenters requested a link to the original tweet and the post was edited to include its actual date. In a separate discussion in the comments, one poster noted that the Commissioner’s badge didn’t have a number, sharing a photograph of it without the black band.

In that thread, the same person noted that the band as displayed was unlikely to obscure badge numbers, and they added images of badges with numbers both visible and obscured:

Over on Twitter, responses to the April 16 2020 tweet seemed to take it as an article of faith that badge numbers were being regularly obscured with the blessing and encouragement of NYPD’s top brass: 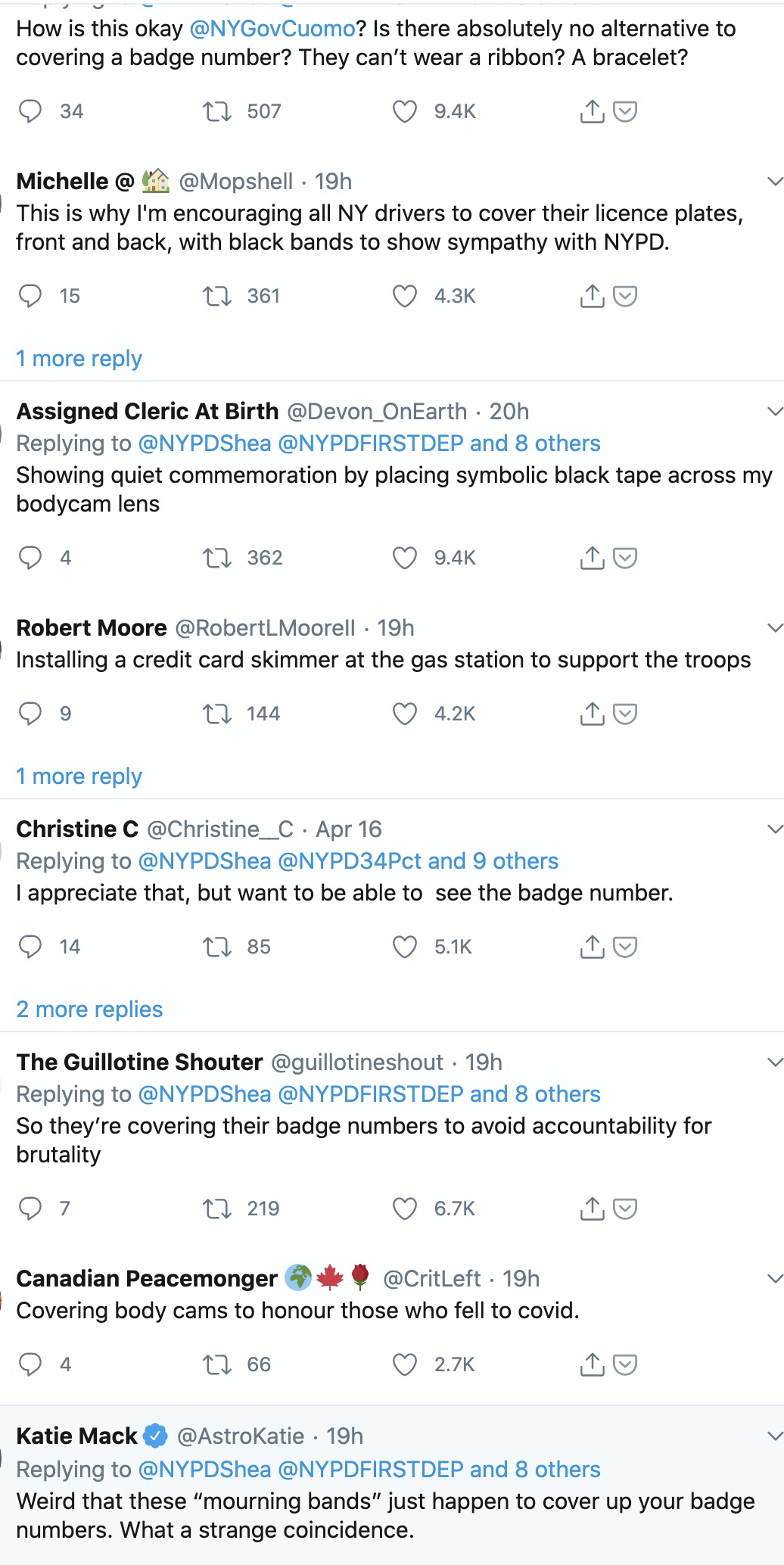 On June 2 2020, The Intercept reported on the issue and added a photograph of a police officer with an obscured badge to its coverage. Immediately before the image appeared in the article, text read:

Despite the videos [of police brutality], advocates and victims of police violence fear that the officers involved in these incidents will escape accountability, as a number of officers assigned to protests have begun covering the badge numbers necessary to identify them. The NYPD did not comment on officers covering their badges.

That image appeared next in the article, and the following text thereafter:

Covering one’s badge number is in direct violation of the NYPD’s patrol guide, which allows officers to wear “mourning bands” covering the seal of the city upon the death of an officer but mandates that the seal number and rank remain visible. In April [2020], Shea wrote on Twitter that some officers would be wearing mourning bands in commemoration of NYPD officers who died of Covid-19.

But covering one’s badge number also violates New York’s Right to Know Act, which mandates officers identify themselves by name, rank, and shield number when they interact with people. The act, which went into effect in 2018, also requires officers to inform those they stop that they have a right to refuse consent for a search, and to document those requests.

The same image in the article appeared in a June 2 2020 tweet depicting the officer’s badge, the band, and the partly-obscured badge number:

Hey @NYPDShea @NYPDChiefofDept are you okay with this officer hiding his badge number? Why doesn't he want to be identified? pic.twitter.com/0gggOmayug

Twitter users and The Intercept cited the “Right to Know Act” in New York City, copies of which were difficult to find. Summaries were rife, such as a NYC.gov FAQ. However, no portion of it mentioned “mourning bands” or even visibly obscured badges:

The Right to Know Act, in effect as of October 19, 2018, is made up of two components. The first outlines New York City Police Department (NYPD) officers’ obligation to identify themselves, including by providing their name, rank, command, and shield number to civilians at the beginning of certain interactions. The law also requires officers to have business cards that contain this information. These business cards direct civilians to where they can comment or complain about an encounter with an officer and where they may request any body-worn camera footage of their interaction. Under the Right to Know Act, civilians may always ask an officer for this business card but officers are only required to offer the card in certain circumstances, such as during a frisk, searches of your person, property, vehicle, or home, or at sobriety checkpoints.

The second component of the law addresses situations in which officers seek to perform a search and do not have legal justification to do so without a person’s consent. In these circumstances, the Right to Know Act requires that officers explain that searches will not be conducted if a person refuses to provide consent to the search. In addition, the law requires officers to document these requests. As is required in all encounters, including when seeking consent for a search, officers are instructed to use language interpretation services pursuant to the NYPD’s language access plan prior to the search. This can include the use of bilingual officers and telephonic interpretation.

ChangetheNYPD.org also described the Right to Know Act as two-fold, with one part concerning officer identification and the other consent to search civilians. The site noted that “The Right to Know Act consists of two laws (in effect as of October 19, 2018),” and explained the portion in question was known as the “NYPD ID law”:

NYPD ID law that was passed has major loopholes but requires that in certain situations officers should:

During the following interactions, officers must identify themselves, the reason for the interaction, and give you a business card without you having to ask for it:

Crucially, no portion of the “NYPD ID Law” described involved the use of mourning bands, either in general or as an obstruction of a badge number. The law held that NYPD officers were legally bound to provide their name, rank, command, and cause to anyone whose day was “interrupted” by New York City police. But there didn’t seem to be a provision governing the visibility of badge numbers or mourning bands.

Overall, very little information about either law as written appeared to be publicly available under either the “Right to Know Act” or the “NYPD ID law,” and results for either were primarily ancillary mentions in localized reporting.

On an advice page provided by the New York American Civil Liberties Union (NYCLU), the ID provision was mentioned only in passing. Again, no provision regarding visible badge numbers appeared:

In New York City, if officers are investigating criminal activity, they’re required to identify themselves and let you know the reason for the interaction. If they don’t arrest or ticket you, officers are required to give you a business card at the end of the encounter. Regardless of the circumstances, unless an officer is responding to an emergency situation, local law requires any officer to provide their identification and a business card upon request.

Much of the June 2020 consternation over Shea’s April 2020 tweet seemed to stem from The Intercept’s claim that covering one’s badge number “violates New York’s Right to Know Act, which mandates officers identify themselves by name, rank, and shield number when they interact with people.” Little information was available for review about the relevant portion of the two laws known as the Right to Know Act, but it seemed that much of the focus of the legislation hinged on police obligation to provide name, rank, command, and other information on a business card.

Ultimately, circulation of Commissioner Shea’s April 2020 tweet in June 2020 led to initial confusion among readers and viewers who were initially not shown the date of the tweet — April 16 2020. Concurrent reporting by The Intercept invoked fairly recent New York City laws under the “Right to Know Act,” describing protest images of covered badge numbers as a violation. It was likely true some officers obscured their badge numbers during protests, as evidenced by many photographs. However, it did not appear the act of obscuring one’s badge in and of itself violated the law as written, and neither did it release officers from their obligation to identify themselves to citizens where indicated. The image and tweet were real but misleadingly out of date, and police were obliged to identify themselves and provide a business card where indicated by law.