"A 7' tall statue of Medusa holding Perseus' severed head will be installed in Manhattan across from the NY County Criminal Court, location of high profile abuse cases including the Harvey Weinstein trial. #MeToo"

In October 2021, posts about a statue of Medusa holding the severed head of Perseus being installed at a New York criminal court in honor of the #MeToo movement appeared on Facebook and Twitter: 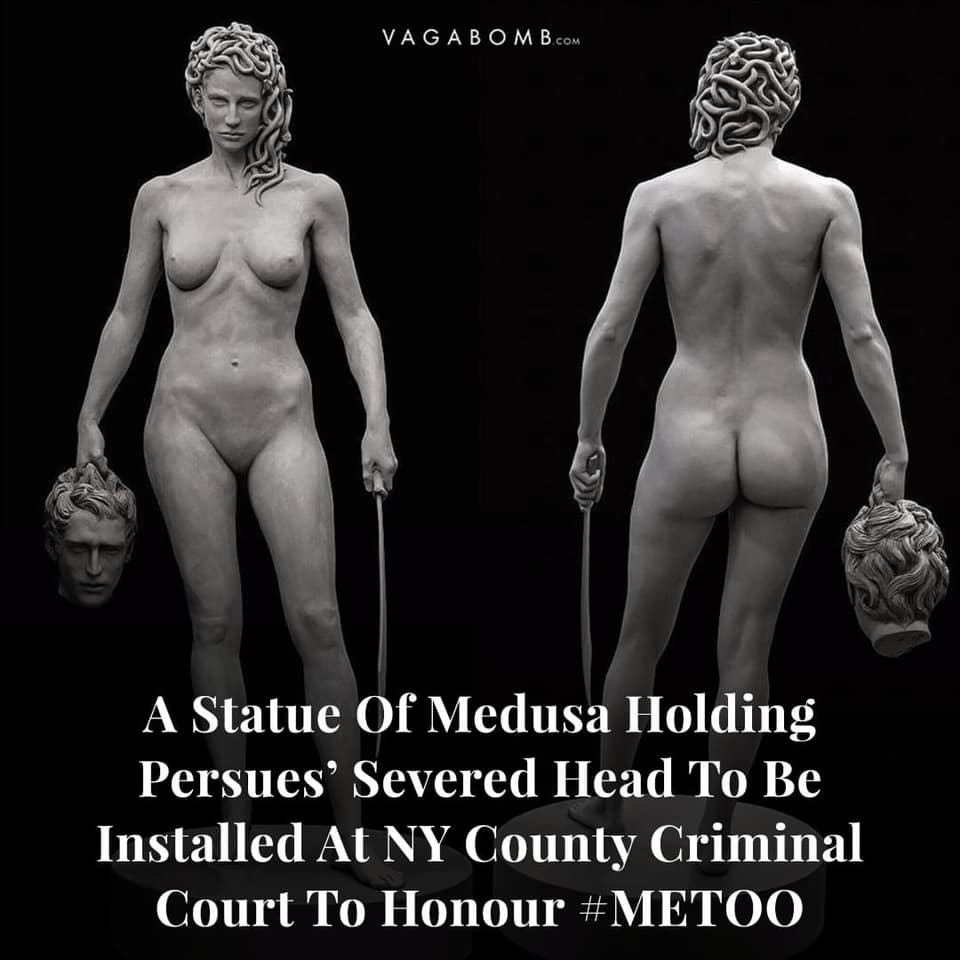 Text on the image read:

A pair of tweets about statue stated:

2/2 Medusa was stalked & raped in Minvera’s temple by Poseidon, blamed for it & cursed by Athena with her petrifying snake hair, banished, & then hunted & beheaded by Perseus. This statue “inverts the narrative” as a commentary on the Me Too movement.

At the top of the above image, a website (Vagabomb.com) was listed. The image was featured on a post on the Vagabomb’s Facebook page from October 2020:

According to Greek mythology, Medusa was stalked & raped by Poseidon. But, instead of Poseidon facing any consequences, Medusa was blamed for it and Athena cursed her with snake-like hair, greenish skin and whoever gazed at her would turn into stone. A famous sculpture ‘Perseus with the head of Medusa’, even celebrated her beheading at the hands of Perseus, son of Zeus.

However, in an attempt to change the narrative around how we perceive victims of sexual assault, an NY artist will install a 7-foot statue of Medusa holing Perseus’ head. This is especially in honour of the #MeToo movement and the women who took a stand. It will even be placed at the NY County Criminal Court where the Harvey Weinstein trial took place.

“The place chosen is not accidental, since there they judge cases for crimes related to violence against women,” Sculptor Luciano Garbati said on Instagram.

Here’s to taking back the narrative and to not punishing women for crimes against them.

Neither the October 2020 or 2021 posts were the first discussion linking the mythological figure of Medusa to the #MeToo movement. An August 2019 WBUR article, “This Performance Reclaims The Myth Of Medusa After #MeToo,” began:

Western culture has an enduring fascination for Greek mythology. Even if you are not a mythology enthusiast, you probably have a basic idea or vague image of the various gods and figures. Fearsome monster-woman with snakes for hair? Medusa.

The Medusa we know was raped by Poseidon in the goddess Athena’s temple. Athena then punished her for desecrating her sacred space by cursing Medusa with a head full of snakes and a gaze that turns men to stone. Then, a heroic Perseus severed the serpent-headed Medusa, turning her into a trophy.

But, what if Medusa’s story didn’t go exactly as we’ve been told? What if the real story had been buried under patriarchal values of male heroism and competition? A woman silenced and demonized after being sexually assaulted — that sounds all too familiar.

The sculpture’s inspiration came before the #MeToo movement.  On October 13 2020, the New York Times‘ “How a Medusa Sculpture From a Decade Ago Became #MeToo Art” described its creation, and explained its presence near a Manhattan court:

When the artist Luciano Garbati made his sculpture of Medusa holding Perseus’ severed head — an inversion of the centuries-old myth — feminism was not what he had in mind.

He wasn’t thinking of the #MeToo movement either: Mr. Garbati had created the work in 2008, nearly a decade before the movement went mainstream.

Mr. Garbati, an Argentine artist with Italian roots, was inspired by a 16th-century bronze: Benvenuto Cellini’s “Perseus With the Head of Medusa.” In that work, a nude Perseus holds up Medusa’s head by her snaky mane. Mr. Garbati conceived of a sculpture that could reverse that story, imagining it from Medusa’s perspective and revealing the woman behind the monster.

On [October 8 2020], Mr. Garbati’s sculpture — “Medusa With the Head of Perseus” — was reimagined as a symbol of triumph for victims of sexual assault, when it was unveiled in Lower Manhattan, just across the street from the criminal courthouse on Centre Street.

A news release advertised the statue as an “icon of justice,” noting that the towering, nearly 7-foot-tall Medusa stood across from the building where men accused of sexual assault during the #MeToo movement were prosecuted, including Harvey Weinstein, who had been convicted of two felony sex crimes there in February. (The idea for the site predated the trial, but the sentiment remained.)

A photograph of the statue was captioned:

Some observers wondered why, if the sculpture was intended to be about sexual violence, Medusa carried the head of Perseus and not Poseidon, her rapist.

On October 16 2020, Tarana J. Burke (originator of the #MeToo movement) published a statement about the Times article to Instagram:

I have been sent this @nytimes article several times in the last day or so. For those who haven’t seen it – this statue of Medusa holding the severed head of Perseus has been placed across from the courthouse in Manhattan.

Normally I let these things pass but I just feel the need to speak on this.

This statue of Medusa holding the head of Perseus has been dubbed by some, including apparently the sculptor, as a tribute to the ‘me too.’ Movement and it could not be more INACCURATE.

First, let me say as a survivor, if this feels cathartic to you – I’m not taking anything away from that. However, this Movement is not about retribution or revenge and it’s certainly not about violence. It is about HEALING and ACTION.

But let me tell you what the Movement is also not:

This statue doubles down on the idea that this Movement is about hunting down men. It also ties our healing to revenge and casts the semblance of justice that comes from the judicial system as retribution as opposed to accountability.

Even in this article the sculpture says that Medusa was raped by Poseidon but she’s holding the head of Perseus.

None of it is right. This isn’t the kind of symbolism that this Movement needs and honestly, if the sculptor wanted to pay tribute to the ‘me too.’ Movement he should have given me a call and I would have told him to take a clue from @breakthesilenceday who built the first ever Survivors Memorial recently unveiled in Minneapolis. It pays honor to the courage and strength of survivors of sexual violence on whose backs this movement is built. It provides a beautiful space for respite and restoration and doesn’t involve harm doers in any capacity. He could have even created something to memorialize the women who have stood outside of that courtroom in beautiful solidarity.

This monument may mean something to some folks but it is NOT representative of the work that we do or anything we stand for. Be clear.

Moreover, the statue of Medusa was never intended to be a permanent fixture:

MWTH project and NYC Parks are pleased to present Medusa With The Head of Perseus by Argentine-Italian artist Luciano Garbati in Collect Pond Park, located on Centre St, Lower Manhattan, as part of NYC Parks’ Art in the Parks program. The seven-foot bronze sculpture inverts the narrative of Medusa, portraying her in a moment of somberly empowered self-defense. Medusa With The Head of Perseus will be on view from October 13, 2020 – June 7, 2021.

October 2021 social media posts suggested a “statue of Medusa holding Perseus’ severed head will be installed in Manhattan across from the NY County Criminal Court,” alluding to a purportedly upcoming installation. However, the story was a year old at the time of its recirculation, and the statue’s installation concluded earlier in 2021.