An academic paper titled "The Growing Inaccessibility of Science" is itself inaccessible behind a paywall. 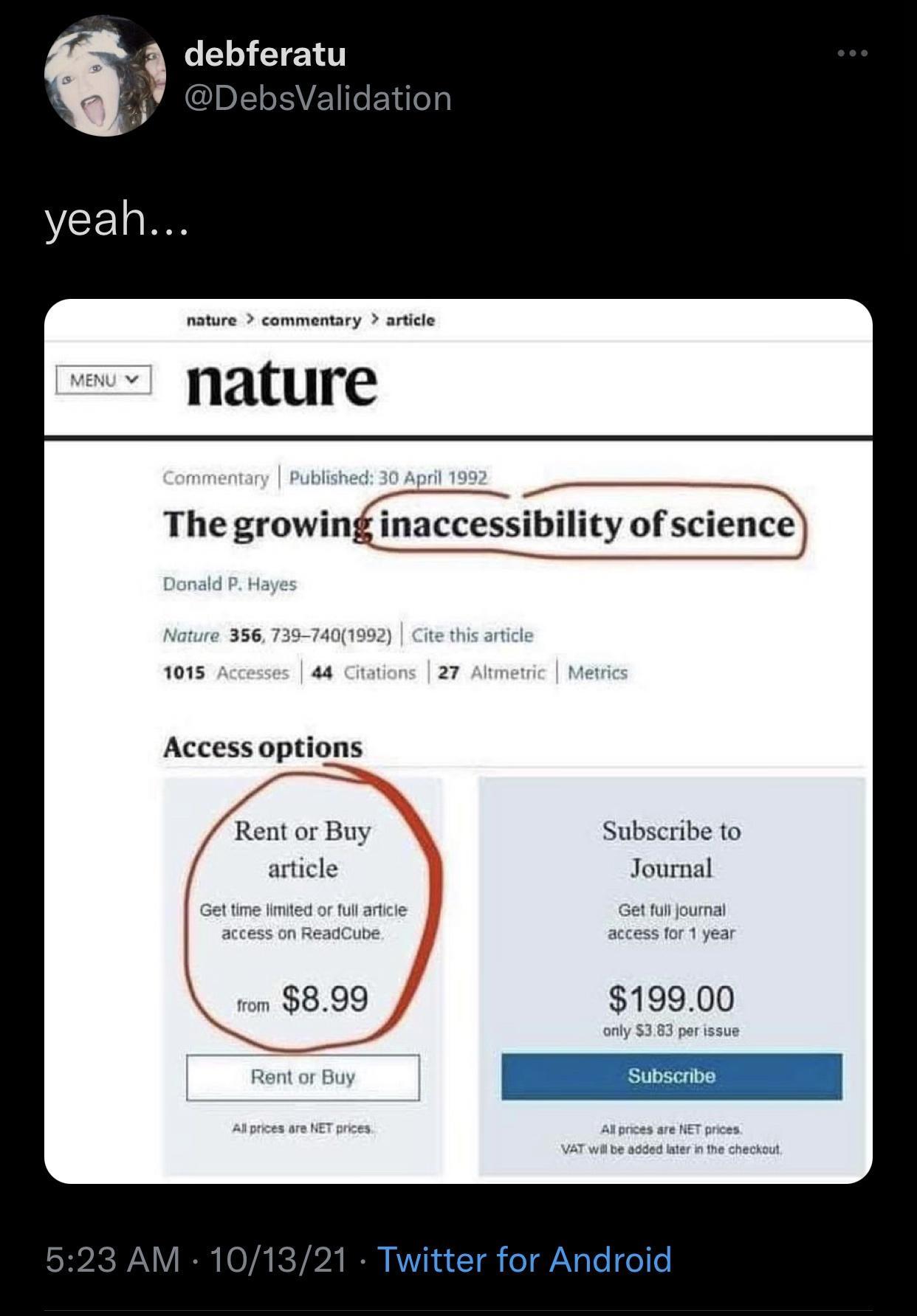 On Imgur, the post was titled “Gee I wonder why.” Originally, the tweet was published on October 13 2021, and simply captioned “yeah …”

The attached screenshot showed a landing page for the journal Nature. Text on it began:

The growing inaccessibility of science

A search for “The Growing Inaccessibility of Science”led to a Nature.com page for the article. However, the “Access options” field did not appear, and a “Download PDF” link opened the complete article in PDF format.

A version of the page archived on October 8 2021 also did not show the “Access options” fields, nor did a version archived in February 2020.

On October 13 2021, the Twitter account shared a follow-up tweet indicating that they had been able to locate a link through which they were able to read The Growing Inaccessibility of Science without having to pay for it:

Update: the article is apparently available using the following link. I got it from Nature's website; I haven't clicked on it. I guess they ironed out the irony.https://t.co/8UfU9XpQxA https://t.co/KlXCTJPM96

Nevertheless, the problem of credible content more frequently existing behind paywalls — thus enabling misinformation and disinformation to spread more freely — is a common issue. A February 2021 case study from the University of Texas Center for Media Engagement, “The Ethics of News Paywalls,” observed:

Despite the argument that paywalls produce better journalism, it has also been argued that they contribute (perhaps indirectly) to the proliferation of misinformation online. Due to the advent of sites like Facebook, Twitter, and various blogging platforms where anyone can be a content producer with relative anonymity and ease, “free, less reliable news sources and aggregators can push articles… that go viral in a matter of seconds whether they are completely true, properly researched, or not” (Concept47, 2019). This allows for fake news to be spread quickly and with little difficulty while real news is trapped behind paywalls.

Though some have positioned this issue as a matter of personal choice which can easily be overcome by consumers “ponying up” and “spending a few dimes” for access to real, high-quality news, the reality may not be so simple (Farr, 2019). Studies have shown that “the people who pay for news in the U.S. are wealthier and better educated than those who do not” (Masnick, 2019). Thus, “putting up a news paywall can cause completely unacceptable asymmetries in the quality of news accessible to people with different financial circumstances… [which goes] against every imaginable principle of democracy” (Giovannetti-Singh, 2017). By hiding content behind a paywall, those who cannot afford to pay a subscription are restricted from accessing information which may potentially affect their lives, leaving the already disadvantaged in society even worse off as they are stuck with unreliable news sources as their only sources. In this way, “the paywall is inherently in conflict with journalism’s primary goal: to educate and inform the public about important issues” (Howard, 2018).

A screenshot of a tweet indicating a Nature article (The Growing Inaccessibility of Science) was popular on Imgur, but the original poster later updated to clarify that they had later managed to find a way to access the article. Disparities in access to credible information exacerbated by paywalls is the subject of ongoing discourse and debate, and the tweet served as a visual example of that continued discussion.