Adhering a strip of medical tape at the top of a face mask will prevent glasses from fogging up "for hours."

On July 17 2020, a Facebook user shared a very popular tip for people who wear glasses and face masks — advising them that introducing a strip of medical tape at the top of the mask would prevent glasses from fogging up for hours: 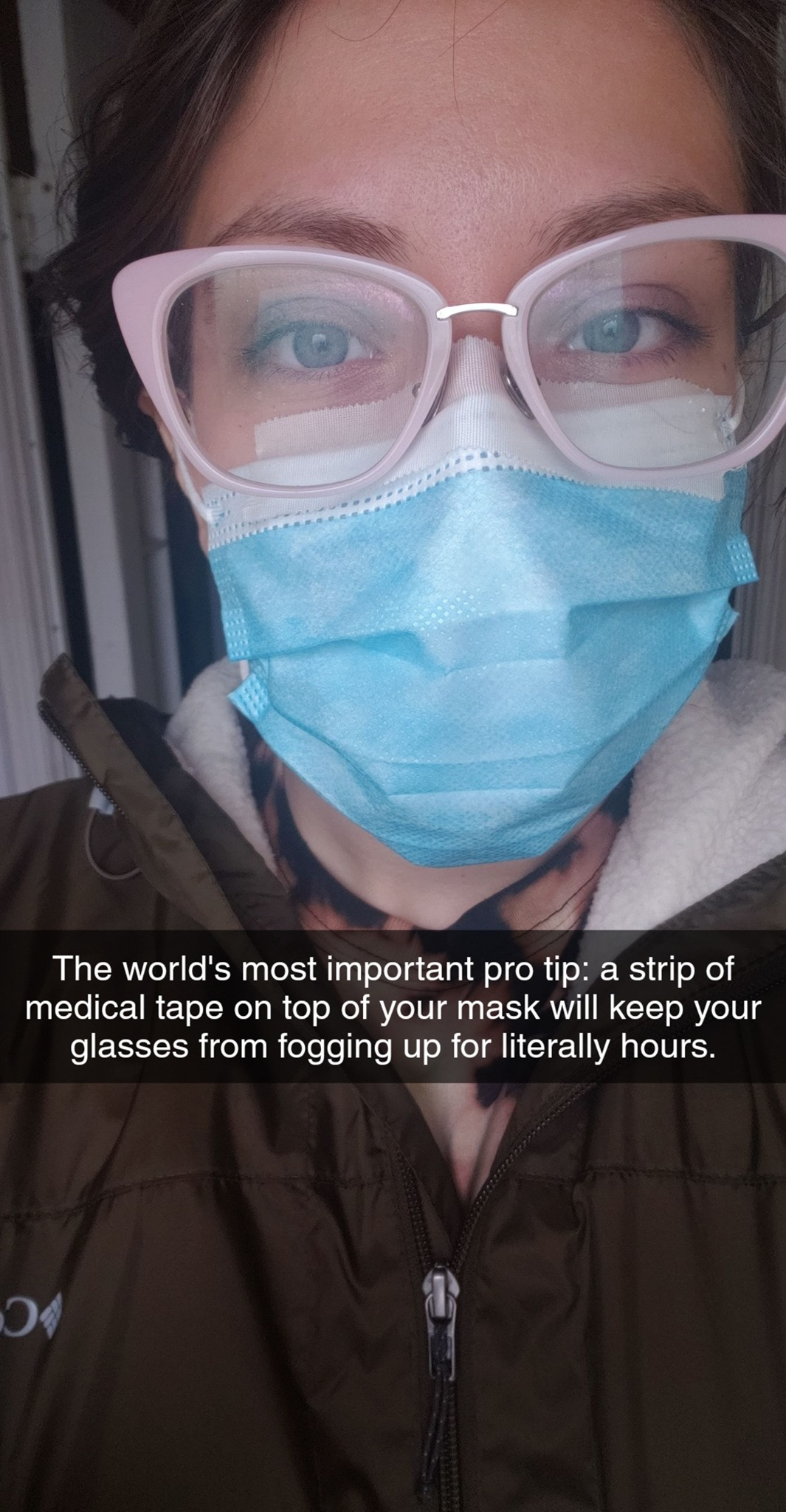 In the photograph, a woman is wearing large glasses and a blue disposable surgical mask. Over the bridge of her nose, a strip of medical tape affixed the mask to her skin and, presumably, prevented her exhaled breath from fogging up her glasses. Across the image was the following text:

The world’s most important pro tip: a strip of medical tape on top of your mask will keep your glasses from fogging up for literally hours.

Alongside the image, the poster wrote:

EXCUSE ME I HAVE AN ANNOUNCEMENT. The Snapchat response convinced me that this info should be shared widely.

Broader Context for the Mask and Tape Tip

As the COVID-19 pandemic worsened in the spring of 2020, use of cloth or disposable face masks became extremely commonplace across the globe.

With that change in behavior, a new irritant for those wearing glasses (or sunglasses) emerged — the change in airflow when exhaling meant that almost immediately after donning a mask, they had a tendency to fog up.

As for how many mask wearers were affected, firm numbers were difficult to pin down. According to an undated page from an eyeglass manufacturer, more than half of Americans might wear glasses to correct vision:

It’s difficult to estimate how many people in the U.S. wear glasses because there are so many variables to consider. Some people only wear glasses to read, and others wear them only to drive. Many people only wear eyeglasses part of the time and contact lenses the rest of the time. Some sunglasses are prescription, and some are protection from the sun or simply a fashion accessory.

Drugstores sell non-prescription glasses for reading; that is, anyone can buy them without seeing their eye doctor for an exam. Fourteen percent of Americans use these. The majority of people, about 85% of the American population, wear sunglasses. Some sunglasses are prescription and others are used only to protect the eyes from damage from the sun.

A 2013 article from a Dutch news source noted that as people got older, they become likelier to wear glasses or contact lenses:

Consequently, it stood to reason more people than not experienced the frustration described in the post.

In the initial post, the user stated that the tape trick enabled wearing masks for hours with glasses, which does not seem implausible from a technical standpoint.

However, if the trick worked as described, the recommendation might not be entirely convenient for a person required to wear a mask for “hours.” Affixing the mask with tape would prevent eating or drinking, and re-taping the mask seemed inconvenient — it would necessitate carrying tape everywhere, and possibly lead to mildly irritated skin from applying and removing the tape. (It also might disrupt makeup.)

The high volume of people sharing the post suggesting that the issue was a widespread frustration. However, we didn’t notice much feedback on the practicality and efficacy of the recommended “mask hack.”

Further, cloth face masks were as commonly used (if not more so) during the pandemic. Some cloth masks were made from synthetic fabrics, and it’s unclear whether medical tape would adhere as well as it can to paper masks.

Masks Vs. Glasses in History

Although the routine adoption of face masks was fairly novel in 2020, segments of the population had always had to balance the need to wear masks with the need for glasses.

In 2016, a user asked Reddit’s r/NoStupidQuestions about how surgeons (many of whom presumably wear glasses and masks for hours while doing incredibly detailed work) handled what had become a major problem in 2020:

How do surgeons keep their glasses from fogging up when they wear masks? from NoStupidQuestions

In a comment at the top of the thread, u/notapantsday described a different strategy to keep glasses unfogged during medical procedures:

The trick is to keep the lower pair relatively loose and the upper pair tight, so exhaled air will mostly exit at the bottom. There are also surgical masks specially for people wearing glasses that have a foam strip at the top to help keep it sealed.

That description was similar in some ways — both methods involved intentionally directing exhaled breath away from glasses lenses — but it involved strategically tying the mask to accomplish that goal. In a separate comment, u/KosstAmojan described using medical tape as in the Facebook post:

I (and many of my colleagues) will supplement the antifog strips by taking a piece of tape and putting it across the top part of the mask onto our nose. This prevents any air from blowing up and fogging up the glasses. Makes a big difference in a 5-hour case.

But that context was surgeons doing surgery for hours at a time and not necessarily stopping to drink water or eat — a manner inconsistent with use outside the medical profession.

In 2014, the issue was discussed in an article in the journal Annals of The Royal College of Surgeons of England. The use of tape was mentioned as one common approach, but strategically tying the mask was the focus of the piece.

Other Advice for Glasses Wearers During the COVID-19 Pandemic

On May 4 2020, the Philadelphia Inquirer addressed what was then a new and unexpected issue for many people.

Acknowledging the problem had long plagued doctors and nurses, the news organization advised:

Solution: Make a mask that fits your nose better

The best way to keep your glasses from fogging is to limit the amount of hot air that can hit them, which means making sure your face mask has a snug fit along the edge that runs across the bridge of your nose. That way, more hot air will be driven into the mask itself, as well as out its sides.

[Nicole Jochym, a third-year medical school student at Cooper Medical School] recommends making a cloth mask with a slot sewn in on the area that touches your nose so you can insert a moldable material like a pipe cleaner, paper clip, or twist tie. That way, you can shape the top edge of the mask to more snugly fit your face, similar to the metal nosepieces in N95 and some disposable surgical masks. And you will be able to remove the metal to clean the mask.

Dr. Samir Mehta was quoted in an explanation of why masks caused glasses to fog up:

“What happens is that as you breathe, air escapes from underneath the mask, and is directed under your glasses,” says Dr. Samir Mehta, chief of orthopedic trauma and fracture care at Penn Medicine. That causes your breath to condense on your comparatively cooler lenses, resulting in a fog on their surface.

On June 25 2020, The Verge published an article with several mechanisms for preventing the problem. One involved selecting a mask with a specific shape to direct the flow of exhaled air, and another covered anti-fogging coatings for lenses. Tape was mentioned, but in a different method of prevention:

If you tape a folded tissue under your mask at the bridge of your nose, it may absorb escaping moisture.

A slightly longer list from a eye care business provided some of the same tips (as did a Boston-area news outlet and the magazine GQ), as well as additional strategies. Taping the mask was one of eight tips mentioned.

Another frequently referenced solution was the use of soapy water to prevent the issue:

“Washing the spectacles with soapy water leaves behind a thin surfactant film that reduces this surface tension and causes the water molecules to spread out evenly into a transparent layer,” the article reveals. “This ‘surfactant effect’ is widely utilised to prevent misting of surfaces in many everyday situations.” Antifogging solutions used for scuba masks or ski goggles also accomplish this.

As people across the world adjusted to wearing face masks in public, the use of medical tape became a viral “pro tip” for people who discovered that face masks caused their eyeglasses to fog up. The original post indicated that tape could prevent the issue for hours, but tape was only one of several approaches to prevent glasses from fogging. Also, the tip was restrictive (as wearers might not easily be able to remove and replace their masks), of unknown efficacy on the very common reusable cloth types of masks, and inconsistent with standard use of masks outside a surgical environment. Information from before the COVID-19 pandemic mentioned the use of tape among surgeons, but other efforts to direct exhaled air down instead of up would likely be similarly effective.