There is a mysterious and inexplicable coin shortage in the United States.

Despite being identified as disinformation, a Facebook post making light of a shortage of available coins around the United States continued to spread in July 2020.

The post, which was published in a Kansas-based conservative group on July 16 2020, has been shared thousands of times:

In 2018 the US Mint produced more than 12.5 billion coins for circulation. From 2008-18 more than 123 billion. The average length of time a coin circulates is 30 years. Where did they all go in four months? 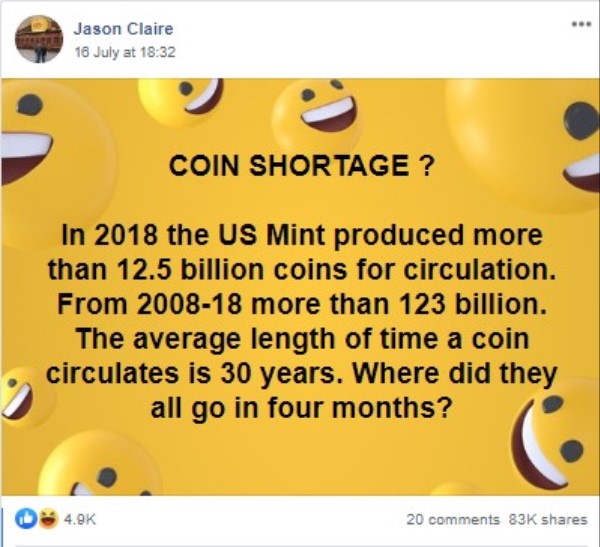 The listing of “12.5 billion coins for circulation” might have been cited from a story published on CoinNews.net which covered coin production between November 2017 and November 2018; according to the U.S. Mint website, that figure grew to 13.1 billion accounting for December 2018.

The second half of the post, though, appears to be drawn from a separate story published by libertarian group the Cato Institute, while simultaneously taking it out of context:

No doubt many find the idea of a coin shortage perplexing. Coins are not consumed; they get passed along from one person to another. In the US, the average coin circulates for around 30 years. How, then, can there suddenly be a shortage of coins? Where have they all gone?

But the Cato piece also provides answers to those questions:

The global pandemic and corresponding shutdowns have led to a huge slowdown in economic activity. Consequently, the usual flow of coins from our piggy banks into the banking system has dried up. Of course, the flow from the banking system to our piggy banks also dried up, as retailers did not need to request coins from their banks to make change for non‐​existent customers.

But as the economy reopened, stores quickly exhausted their existing coin inventories, and then turned to their banks for more. The flow of coins out of the banking system picked up, as coins started piling up in our piggy banks once more. But the flow of coins back into the banking system, from our piggy banks, had not yet restarted. Lacking the usual coin deposits from the public, the banks, in turn, requested coins from the Fed, which requested them from the Mint. With the Mint unable to fill the gap with new coins—and, indeed, falling short of its usual production levels—-a shortage resulted.

The Kansas group’s post is now accompanied by a link to a USA Today story reaffirming that the United States is indeed experiencing a coin shortage:

As the spreading coronavirus and resulting business closures crippled economic activity in the United States, the circulation of coins dropped off significantly. The US Mint, which manufactures the nation’s coin supply, also decreased staffing in response to the pandemic.

As the nation’s businesses have reopened, demand for coins has exceeded the available supply.

Federal Reserve chairman Jerome Powell told the House Financial Services Committee on June 17 that the coin shortage has resulted from the partial closure of the economy.

The Kansas group’s post is not the first instance of misattribution being used to push a claim related to the coin shortage; it came less than a week after social media users falsely credited pundit Dave Ramsey with an argument about a “cashless society.”