"There was a 22 year window in which a samurai could have sent a fax to Abraham Lincoln."

On July 16 2021, the Facebook page “The memes your parents warned you about” shared a screenshot of a text message, which claimed that there was “a 22 year window” during which “a samurai could have sent a fax to Abraham Lincoln”: 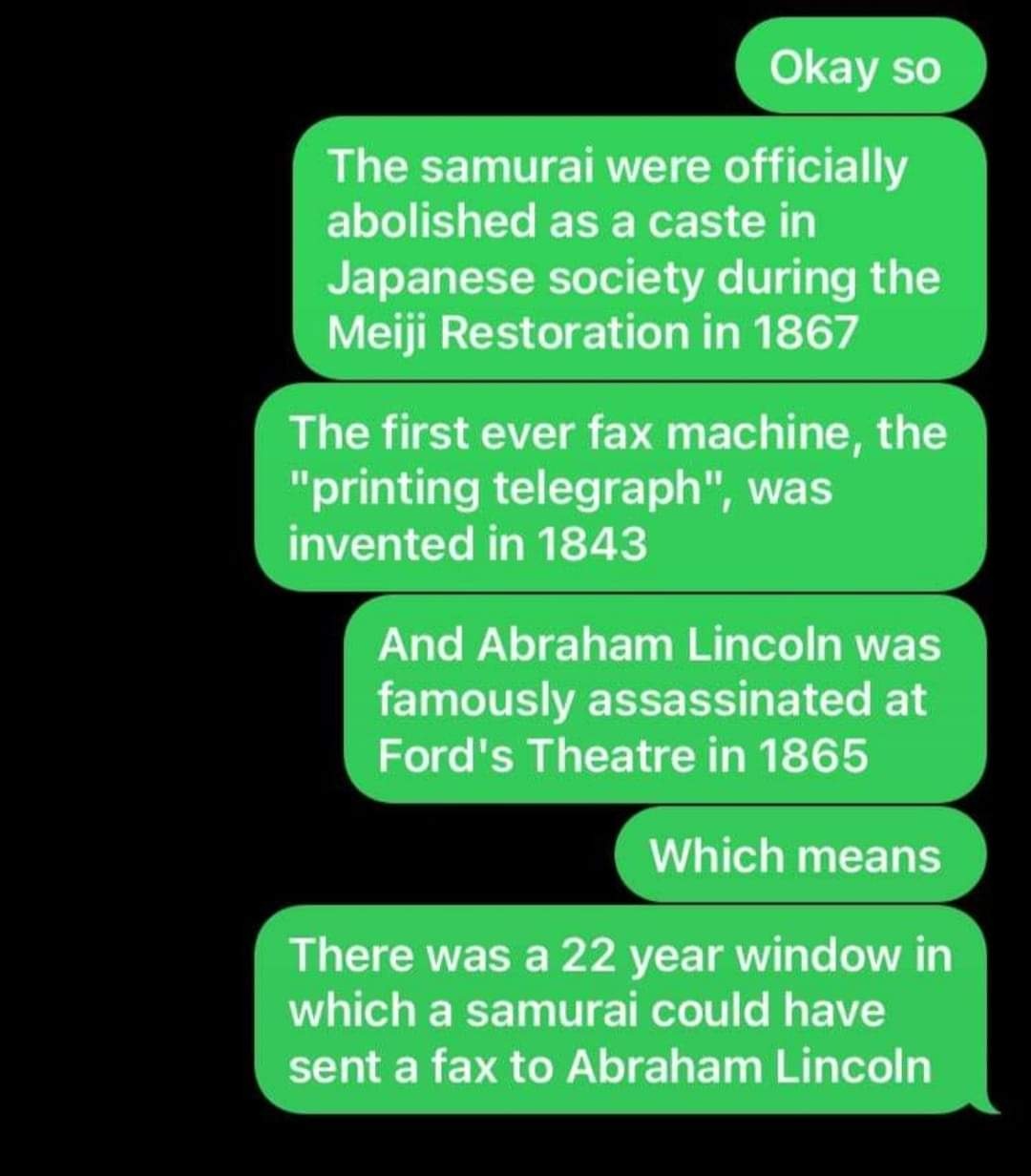 Depicting one side of a conversation via text, it read:

The first ever fax machine, the “printing telegraph”, was invented in 1843

On July 18 2021, a Reddit user shared the meme to r/BrandNewSentence (and someone else posed it as a question to the notoriously strict r/AskHistorians):

That meme was not the first to use humor and surprise by juxtaposing the chronological order of purported historical events. Its claims were also fairly simple individually, combining to create a seemingly preposterous conclusion involving the long-dead Abraham Lincoln receiving a message via fax machine from “a samurai.”

A Brittanica.com entry both defined the meaning of “samurai” and addressed the meme’s first point in its opening sentences:

Samurai, member of the Japanese warrior caste. The term samurai was originally used to denote the aristocratic warriors (bushi), but it came to apply to all the members of the warrior class that rose to power in the 12th century and dominated the Japanese government until the Meiji Restoration in 1868. Emerging from provincial warrior bands, the samurai of the Kamakura period (1192–1333), with their military skills and deep pride in their stoicism, developed a disciplined culture distinct from the earlier, quiet refinement of the imperial court.

The Tokugawa shogunate came to its official end on November 9, 1867, when Tokugawa Yoshinobu, the 15th Tokugawa shōgun, “put his prerogatives at the Emperor’s disposal” and resigned 10 days later. This was effectively the “restoration” (Taisei Hōkan) of imperial rule – although Yoshinobu still had significant influence and it was not until January 3, the following year, with the young Emperor’s edict, that the restoration fully occurred. On January 3, 1868, the Emperor stripped Yoshinobu of all power and made a formal declaration of the restoration of his power …

… Finally, by 1872, the daimyōs, past and present, were summoned before the Emperor, where it was declared that all domains were now to be returned to the Emperor. The roughly 280 domains were turned into 72 prefectures, each under the control of a state-appointed governor. If the daimyōs peacefully complied, they were given a prominent voice in the new Meiji government. Later, their debts and payments of samurai stipends were either taxed heavily or turned into bonds which resulted in a large loss of wealth among former samurai.

The meme’s initial assertion about the abolition of the samurai caste in 1867 was reasonably accurate.

‘The First Ever Fax Machine, The Printing Telegraph, Was Invented in 1843’

This particular claim about the “first ever fax machine” being invented in 1843 presumably covered not the widespread adoption of faxing, but the very first machine developed for a purpose we would understand to be similar to faxes.

In 2014, tech site Gizmodo’s “The Surpisingly Old Origins of the Fax Machine” explained:

Alexander Bain, a Scotsman clockmaker living in London, was already a decently well-known inventor by the time he got to inventing the world’s first facsimile (meaning in Latin to “make alike”) – or fax – machine … On May 27, 1843, he applied for a patent for a “chemical telegram” and “”improvements in producing and regulating electric currents and improvements in timepieces, and in electric printing, and signal telegraphs,” in which “a copy of any other surface composed of conducting and non-conducting materials can be taken by these means.”

His new invention used the newly popularized telegraph (the electrical telegraph, which was patented by Samuel Morse in 1837) as its base and then added electromagnetic pendulums (like his clock) that would scan the image and puncture a chemically treated paper with lines and tics, which would then be interpreted by a telegraph operator … Bain’s initial version of the fax machine essentially was a written telegraph and this wasn’t lost upon Samuel Morse.

Gizmodo described several individuals who attempted to build a proto-fax machine. One was Frederick Bakewell, who “was able to send the first certified ‘telefax’ with actual words and images,” and “demonstrated it at the Great Exhibition in London in 1851, but it wasn’t met with much enthusiasm due to the very long time it took to copy and transmit.” The article drew to a conclusion by explaining when fax machines were adopted for enterprise:

The first wireless fax was sent, using radio-waves, in 1924. Richard Ranger worked for the Radio Corporation of America (RCA) when he sent an image of President Calvin Coolidge on November 29, 1924 across radio-waves. Also all the way back in 1924, the first color fax was sent by Herbert Ives of the American Telephone and Telegraph Company (AT&T).

Despite reliable fax machines (even wireless and color) being around for quite some time, it wouldn’t be until 1964 when fax machines were widely used commercially.

Generally, 1964 is considered the point at which faxing was commercially viable.

On Good Friday, April 14, 1865, Lincoln was assassinated at Ford’s Theatre in Washington by John Wilkes Booth, an actor, who somehow thought he was helping the South. The opposite was the result, for with Lincoln’s death, the possibility of peace with magnanimity died.

A popular Facebook meme claimed that “the samurai were officially abolished as a caste in Japanese society during the Meiji Restoration in 1867,” the first ever fax machine … was invented in 1843,”  and “Abraham Lincoln was famously assassinated at Ford’s Theater in 1865,” concluding that there existed “a 22 year window in which a samurai could have sent a fax to Abraham Lincoln.” That statement involved three independent assertions about historical events — the abolition of the samurai caste in 1867, the invention of the first fax machine in 1843, and the assassination of Abraham Lincoln in 1865. All three events are technically true and warrant a rating of “true,” with the caveat that Abraham Lincoln receiving a fax from the samurai between 1843 and his death in 1865 would have been highly unlikely due to the fact that faxing did not really become common until 1964 — 99 years after Lincoln’s assassination.