"In the Cayman Islands, there is a modest five-story building that is home to 18,857 companies."

On July 16 2021, an Imgur user shared a Bernie Sanders quote meme which alleged that a “modest building” in the Cayman Islands was the address for “18,857 companies”: 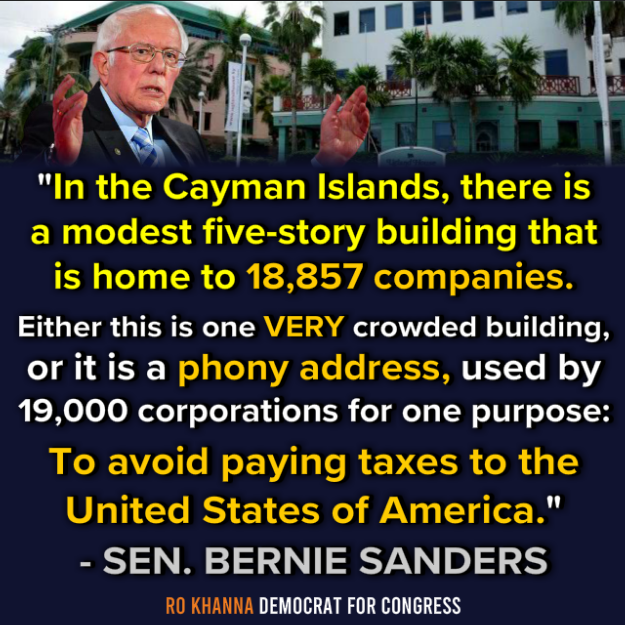 Text on the meme attributed its creation to “Ro Khanna Democrat for Congress,” and the wording was almost identical to a March 6 2020 tweet by Sen. Bernie Sanders:

In the Cayman Islands, there is a modest five-story building that is home to 18,857 companies.

Either this is one very crowded building, or it is a phony address, used by 18,000-plus corporations for one purpose: to avoid paying taxes to the United States of America.

Neither the meme nor the tweet included a source for that highly specific figure of 18,857 companies purportedly headquartered in “a modest five-story building” offshore in the Cayman Islands. However, a search indicated the figure had not only been around a lot, but that it went back for years.

So old was the figure in fact that many early iterations referencing 18,857 companies in a single building in the Cayman Islands were archived links. One was a May 6 2009 aggregated Bloomberg item, in which the figure of 18,857 appeared in the headline but not the body:

One five-story building in the Cayman Islands – 18,857 head offices

At least 10 of the 30 companies listed in the Dow Jones Industrial Average have had units with addresses in the Caymans.

The Cayman Island law firm, which provides services for the corporations that use its address, has incorporated more than 6,000 new companies over the past five years. In 2004, the building served as home to 12,748 companies using the same address in the Caymans, a British crown colony 240 kilometres south of Cuba. About half of the companies with Cayman addresses have a billing address in the United States, according to the GAO.

In that brief mention, the original article said that “about half” of the 12,748 companies using the address as of 2004 “have a billing address in the United States.” A January 2012 ForeignPolicy.com article, “House of 19,000 Corporations,” reported on the figures in the context of that year’s general election, incumbent United States President Barack Obama, and Sen. Mitt Romney.

Once again, the reporting noted that “about half” of the 19,000 companies have billing addresses in the United States:

Walker House is just one of a number of addresses in downtown George Town used by corporations, including Coca-Cola, Oracle, and Intel, to minimize taxes or cut out the red tape in international transactions. The vast majority of these companies are legally prohibited from doing business in the Caymans themselves. The most famous of these addresses, located just down the road at 335 South Church St., is Ugland House, a five-story office building that is home — physically — to law firm Maples and Calder, and — on paper — nearly 19,000 companies.

President Barack Obama called out Ugland House specifically in a 2009 speech, saying “either this is the largest building in the world or the largest tax scam in the world.” Legally speaking, it’s neither. A 2008 GAO report found no evidence of illegal activity by Maples and Calder or any of the entities registered at Ugland House, about half of which have billing addresses in the United States. But, particularly in the case of hedge funds and private equity funds like Bain’s — about 38 percent of Ugland’s “tenants” — the building makes a mockery of the U.S. tax system.

That story referenced a 2009 speech by Obama in which the then-president “called out” the address purportedly serving as home for 18,857 companies. The speech had a dead link, but an archived version was available:

… The way to make American businesses competitive is not to let some citizens and businesses dodge their responsibilities while ordinary Americans pick up the slack.

Unfortunately, that’s exactly what we’re doing. These problems have been highlighted by Chairmen Charlie Rangel and Max Baucus, by leaders like Senator Carl Levin and Congressman Lloyd Doggett. And now is the time to finally do something about them. And that’s why today, I’m announcing a set of proposals to crack down on illegal overseas tax evasion, close loopholes, and make it more profitable for companies to create jobs here in the United States.

For years, we’ve talked about shutting down overseas tax havens that let companies set up operations to avoid paying taxes in America. That’s what our budget will finally do. On the campaign, I used to talk about the outrage of a building in the Cayman Islands that had over 12,000 business — businesses claim this building as their headquarters. And I’ve said before, either this is the largest building in the world or the largest tax scam in the world.

Investopedia’s undated entry on tax havens (updated in March 2021) referenced the figure and provided a citation:

Tax havens typically do not require outside entities to have a substantial local presence. Such a concession could lead to interesting situations. For example, a 2008 Government Accountability Office report found that one building in the Cayman Islands housed 18,857 mostly international companies.

The sole occupant of Ugland House is Maples and Calder, a law firm and company-services provider that serves as registered office for the 18,857 entities it created as of March 2008, on behalf of a largely international clientele. According to Maples partners, about 5 percent of these entities were wholly U.S.-owned and 40 to 50 percent had a U.S. billing address. Ugland House registered entities included investment funds, structured-finance vehicles, and entities associated with other corporate activities.

As such, the figure of 18,857 Cayman Islands addresses was rooted in credible data — data published in 2008. We looked at the Wikipedia page for Ugland House on July 21 2021, and it provided a far larger figure for the number of companies headquartered in the building:

Ugland House is a building located in George Town, Cayman Islands. Located at 121 South Church Street, the building is occupied by the law firm Maples and Calder and is the registered office address for 40,000 entities, including many major investment funds, international joint ventures and capital market issuers.

However, the cited source for the 40,000 figure was a site created by the law firm Maples and Calder to “dispel misinformation” about their activities in the Cayman Islands, and its position was far from neutral:

How can 18,000 companies claim to be conducting business out of Ugland House, a small five-storey building in Cayman? That’s impossible, so something wrong must be happening there.

The building [Ugland House] has been the subject of highly-charged and unfair comment in press and political circles. Amongst other things, companies registered at Ugland House have been described as “shells”, owned by individuals to evade tax and take advantage of secrecy laws. This is not the case and mischaracterises the true purpose of setting up Cayman companies.

In June 2014, the 18,857 figure appeared in a New York Times article (archived) about a then-new report concerning Ugland House and tax evasion:

Did you know that United States companies earned $129 billion in 2010 in three small groups of islands?

That is what they told the Internal Revenue Service they earned in Bermuda, the Cayman Islands and the British Virgin Islands.

Those islands together had a population of 147,400 that year, about equal to that of Joliet, Ill.

Assuming you believe those figures, the productivity of workers in those countries is amazing. On average, United States companies had profits of $873,611 per person living in those islands.

By contrast, those same companies reported earning $12.6 billion in China, a country with 1.36 billion people. On a per capita basis, that comes to a little more than $9 a person.

Of course, those numbers are nonsense. The United States income tax laws allow companies to claim they earned profits in countries where they actually had few, if any, operations, but where taxes are extremely low.

A report this week by two groups upset about the low effective income tax rate for corporations, the U.S. Public Interest Research Group Education Fund and Citizens for Tax Justice, said that 372 of the companies in the Fortune 500 — generally the 500 United States companies with the highest revenues — reported a total of 7,827 subsidiaries in countries that the groups view as tax havens … The new report [in 2014] describes “a modest five-story office building” known as Ugland House in the Cayman Islands. “It is the registered address for 18,857 companies.” The Cayman Islands have a population of about 55,200, so that is one company for every three people. And of course many companies are registered in other buildings.

Source data linked by the Times also involved a dead link, but an archived copy [PDF] of the report (“Offshore Shell Games”) started off with a familiar sentence:

Ugland House is a modest five-story office building in the Cayman Islands, yet it is the registered address for 18,857 companies.

A footnote after the statement led to the above-linked July 2008 GAO report, which was likely accurate at the time of publication, and just as likely to have changed or fluctuated between 2008 and 2021.

In July 2021, a popular Imgur meme quoted Sen. Bernie Sanders’ March 2020 statements about a “modest five-story” Cayman Islands building housing 18,857 companies — either “one very crowded building, or it is a phony address, used by 18,000-plus corporations for one purpose: to avoid paying taxes to the United States of America.” The highly specific figure of 18,857 companies originated with a July 2008 GAO report that remained widely cited for many years after its publication. Most reporting indicated about half of the companies “had a billing address in the United States,” but later figures placed the number of companies headquartered there as high as 40,000. Ultimately, given the age of the figure and ancillary details, the claim is Decontextualized.