"... agriculture workers are killed on the job at a higher rate than cops, they make about a third as much money ..."

In April 2021, a popular tweet contained the claim that agricultural workers were likelier to die on the job than law enforcement officers, adding that farm labor also generally pays far less:

Reminder that agriculture workers are killed on the job at a higher rate than cops, they make about a third as much money, and most of the usual child labor laws don't apply.

Oh and they actually do something useful since I like having food.

Although the tweet was popular on Twitter and in screenshots, it did not include a link to validate the claims. It read:

Reminder that agriculture workers are killed on the job at a higher rate than cops, they make about a third as much money, and most of the usual child labor laws don’t apply.

Oh and they actually do something useful since I like having food.

A cursory search didn’t point to any specific news item or other content supporting the claim. However, the Centers for Disease Control and Prevention ‘s National Institute for Occupational Safety and Health (NIOSH) has a published page (“Agricultural Safety”; last updated in October 2020) began:

A subsequent “Fatalities” section provided a fatality rate for agriculture workers — 20.4 deaths for every 100,000 workers:

Data published by the Bureau of Labor Statistics (BLS) in September 2020 included fatalities for 2018:

There were 574 private sector agricultural workers fatally injured on the job in 2018. Transportation incidents resulted in 274 deaths. These include 104 deaths involving land vehicles in nonroadway areas and 94 in roadway areas.

Neither of those resources contrasted the relative risk of agriculture work, nor did they address pay. In late 2020, a number of outlets reported on the recently disclosed numbers from the Bureau of Labor Statistics on the riskiest jobs in the United States, and a CNN Business report included the five most dangerous lines of work per the data for 2019 (neither line of work, policing or agriculture, were mentioned in that short piece).

In January 2020, USA Today published the top 25 most dangerous jobs for 2018, based on BLS data published in late 2019. That list included both agricultural workers (number 13) and law enforcement officers (number 16), with on-the-job fatalities higher in agriculture:

Working on farms can include heavy equipment use and livestock management, which can be dangerous tasks – and miscellaneous agricultural workers are more likely to be killed by an accident at work than most American workers. Transportation incidents such as car accidents accounted for the largest share of fatal injuries on the job for miscellaneous agricultural workers in 2018, followed by inadvertent contact with equipment and other objects.

Data for annual reviews of the riskiest jobs in the United States is compiled by the BLS National Census of Fatal Occupational Injuries. CNN’s late-2020 report linked to the BLS census [PDF]: 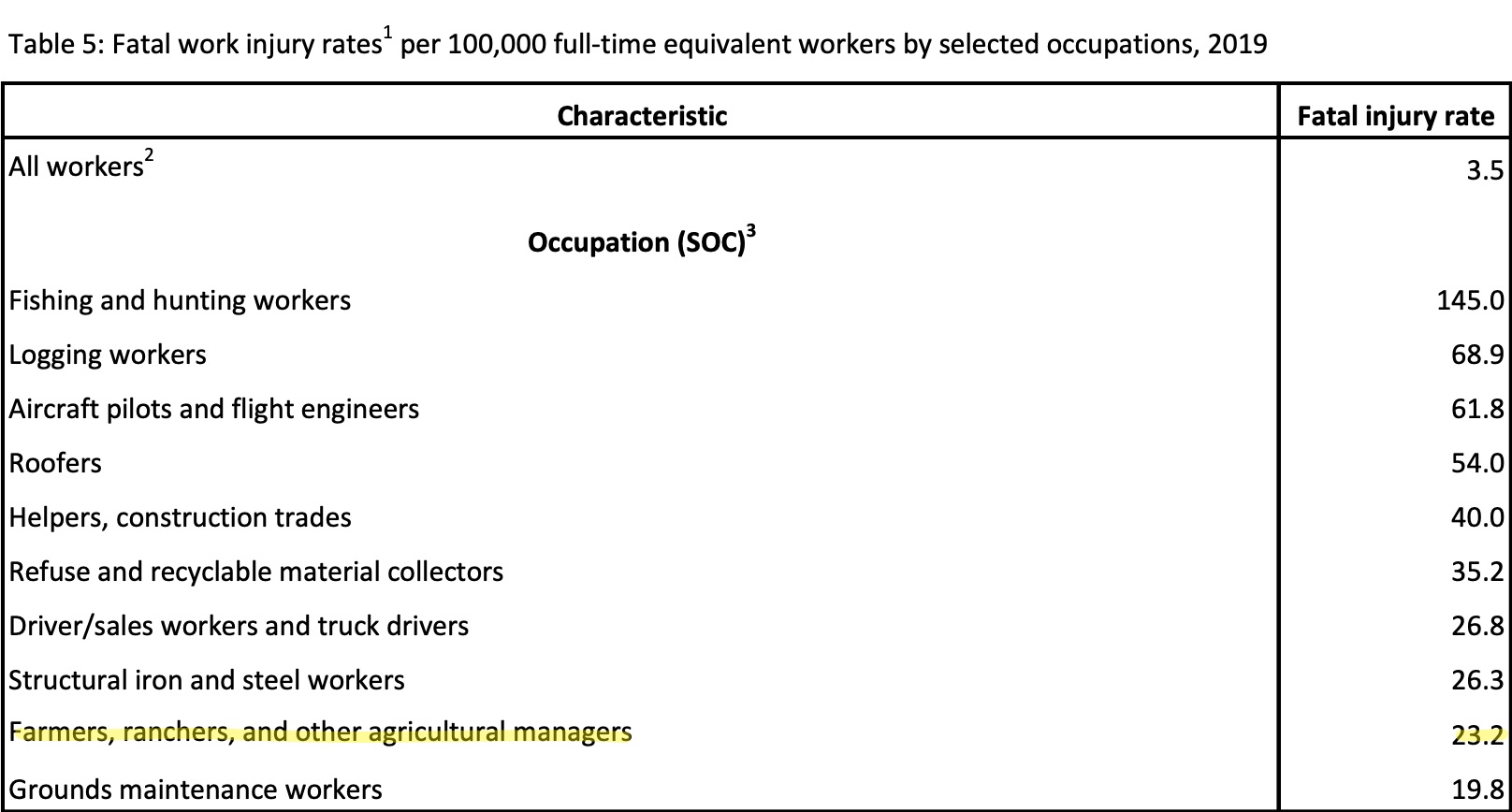 The Bureau of Labor Statistics also provided standardized average salaries for different occupations, with a narrower gap between police and agricultural workers. Both entries contrasted variances between high-cost-of-living areas and their less expensive counterparts, and averages varied by quite a lot.

The tweet’s claim that “agriculture workers are killed on the job at a higher rate than cops” is true, with year-over-year fatalities consistently higher in agriculture. Although median wage estimates suggested that agriculture workers didn’t make about a third as much money on average exactly, the claim was not off by enough to consider it misleading.