Writing about a successful lecture, psychoanalyst Sigmund Freud said "I ascribe to the cocaine" an ability to sound credible and confident.

In a May 2021 Imgur post (titled “Freudian Marching Powder”), a screenshot of a tweet purportedly quoted Sigmund Freud as saying of a lecture that he “ascribed to the cocaine” his ability to enrapture the audience: 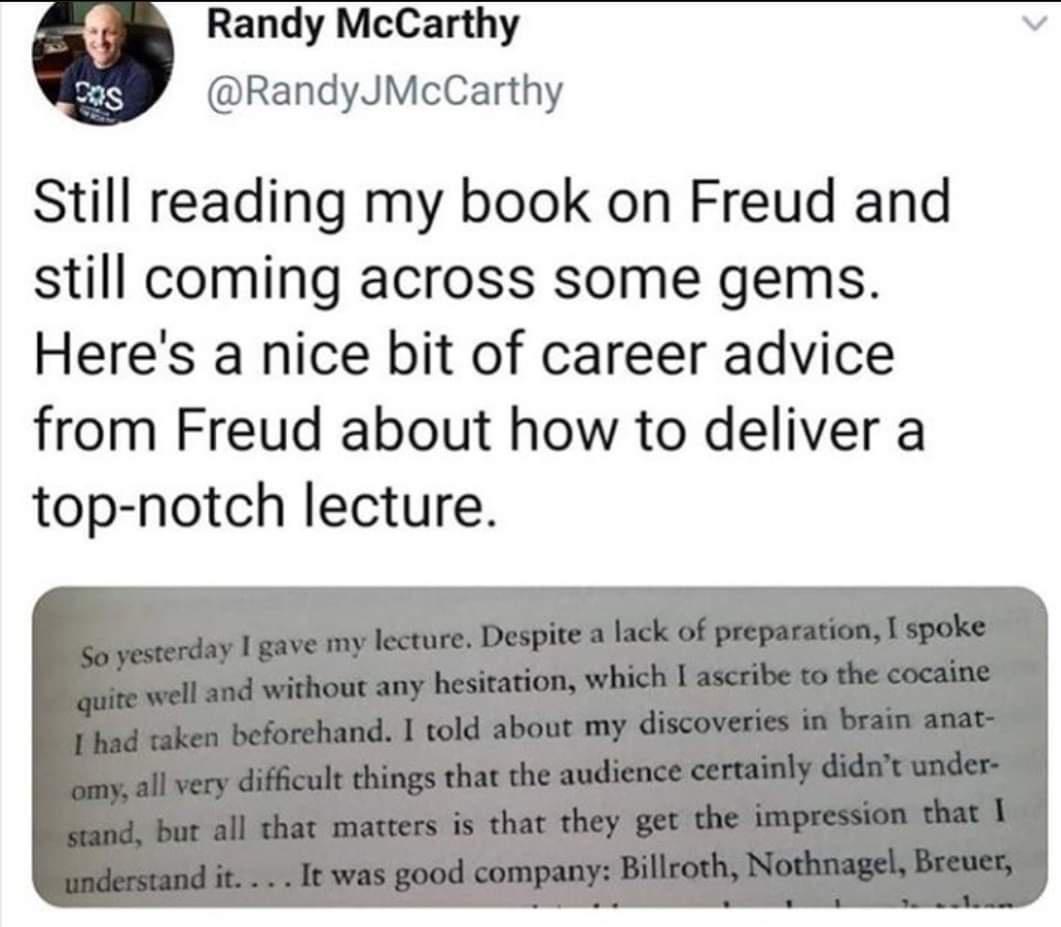 Still reading my book on Freud and still coming across some gems. Here’s a nice bit of career advice from Freud about how to deliver a top-notch lecture.

So yesterday I gave my lecture. Despite a lack of preparation, I spoke quite well and without any hesitation, which I ascribe to the cocaine I had taken beforehand. I told about my discoveries in brain anatomy, all very difficult things that the audience certainly didn’t understand, but all that matters is that they get the impression that I understand it … It was good company: Billroth, Nothnagel, Breuer …

We attempted to find the original tweet by Randy McCarthy (@RandyJMcCarthy), the that account was deactivated as of May 4 2021.

That tweet was originally published on August 17 2019, and archived two days later. Several commenters asked McCarthy for the title of the book containing the passage, and McCarthy responded with an image — after the deletion of the account, the image was unavailable.

Typically, the deletion of a virally popular tweet hinted at a possible shaky source, but McCarthy’s entire Twitter account had been deactivated. We searched for the specific string of words attributed to Freud (“I ascribe to the cocaine”) on May 4 2021, and a mere eighteen results results came back.

Restricting search parameters to anything crawled prior to May 4 2017 (four years earlier) resulted in zero results returned. If Freud had written the “ascribe to the cocaine” passage during his life or career, it was nowhere on the internet as of 2017 — suggesting that if the passage was legitimately attributable to Freud, it originated with either a very recent or a very obscure source.

For instance, the quotation was notably absent from Vice.com’s “A Brief History of Freud’s Love Affair with Cocaine.” Likewise, no trace of the phrase appeared on a Wikiquote page for Freud (absent too from “Misattributed” and the “Talk” tab), where the second quote also originated in a letter to his fiancée — the supposed source of the “ascribe to the cocaine” quotation:

Woe to you, my Princess, when I come… you shall see who is the stronger, a gentle girl who doesn’t eat enough or a big wild man who has cocaine in his body.

Some of the eighteen results returned in May 2021 involved the same screenshot shared by McCarthy in August 2019:

In August 2020 (a year after McCarthy’s tweet), another Twitter user attempted to verify the quote, and was seemingly unsuccessful:

Can anyone point me toward the original source of this Freud quote: “So I gave my lecture yesterday. Despite lack of preparation, I spoke quite well and without hesitation, which I ascribe to the cocaine I had taken beforehand.”

Two weeks earlier, a blog post included an attribution in the form of its headline, “Sigmund Freud – Letter to Fiancée 1884.” An April 2021 post on the blog slimemoldtimemold.com (“Higher than the Shoulders of Giants; Or, a Scientist’s History of Drugs”) mentioned the quotation in a passage about Freud and cocaine. That section included the validated quote excerpted above, and the second quote attributed to a “letter a few months earlier”:

A typical example of the effects of cocaine on the German scientific body can be found in a man you might have heard of — Sigmund Freud, who has the same birthday as one of the authors. Having recently moved on from his earlier interest in trying to find the testicles and/or ovaries of eels (don’t laugh, it was a major scientific question of the day!), he found himself VERY EXCITED by the possibilities of this new treatment, which had just become available to physicians.

“Woe to you, my Princess, when I come,” wrote Sigmund Freud to his future wife, Martha Bernays, on June 2, 1884. “I will kiss you quite red and feed you till you are plump. And if you are forward, you shall see who is the stronger, a gentle little girl who doesn’t eat enough, or a big wild man who has cocaine in his body. In my last serious depression I took cocaine again and a small dose lifted me to the heights in a wonderful fashion. I am just now collecting the literature for a song of praise to this magical substance.”

He didn’t just use cocaine to intimidate (???) his fiancée, though. Freud also found that it had professional applications. “So I gave my lecture yesterday,” he wrote in a letter a few months earlier, “Despite lack of preparation, I spoke quite well and without hesitation, which I ascribe to the cocaine I had taken beforehand. I told about my discoveries in brain anatomy, all very difficult things that the audience certainly didn’t understand, but all that matters is that they get the impression that I understand it.” We see that not much has changed since the 1880s.

Two of the eighteen results were excerpts available via Google Books. One was from the August 2017 book Freud: The Making of an Illusion (the apparent source for the 2019 Twitter screenshot), seen on page 85: 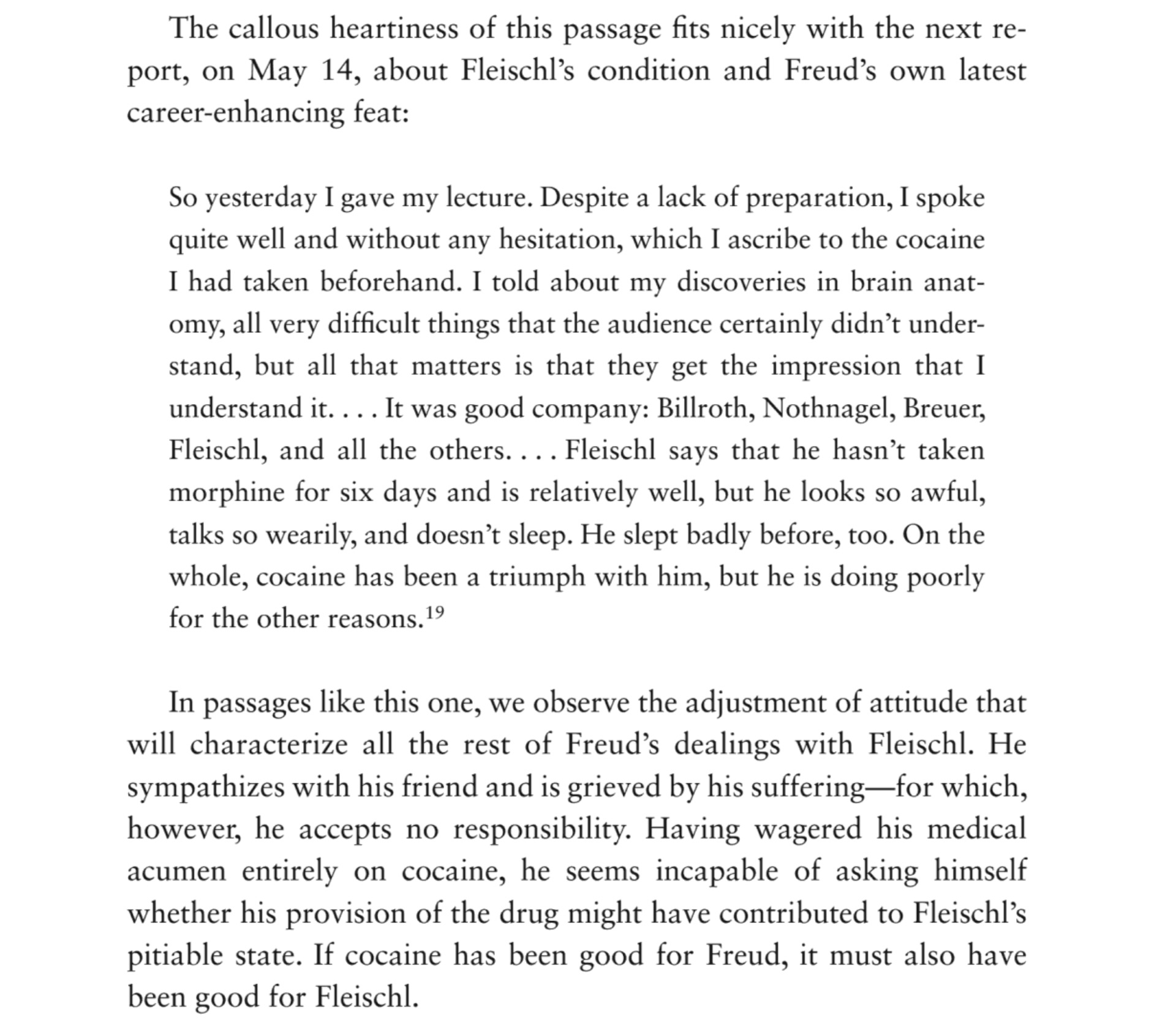 A second “hit” on Google Books involved the 2021 book Calling Bullshit: The Art of Skepticism in a Data-Driven World, on page 40: 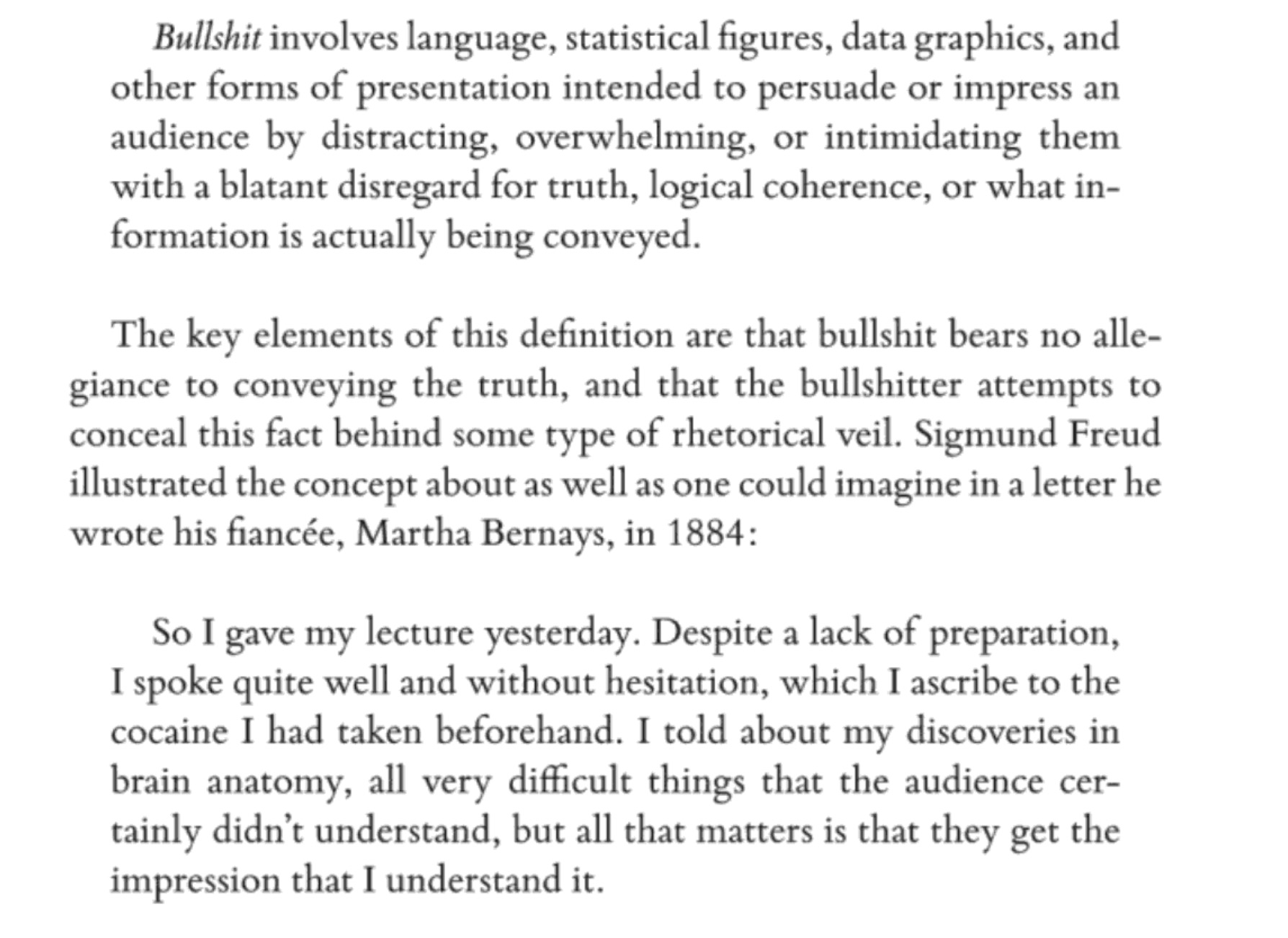 That book was published following the popular tweet, and it may have sourced the quote from the 2017 book. Various items (academic research, PBS profiles, and a Wikipedia entry with a “cocaine” section) published before 2017 lacked any mention of the “ascribe to the cocaine” quote.

In May 2021, a quote attributed to Sigmund Freud (” … which I ascribe to the cocaine I had taken beforehand …”) from a 2019 tweet was reshared to Imgur. The earliest iteration of the quote we located was in the August 2017 book Freud: The Making of an Illusion, the apparent source for the screenshot in question. We were unable to locate any mentions of the quote prior to 2017, and most iterations from 2019 forward traced back to the same since-deleted tweet. Although the possibility of it originating with an obscure letter remained, we could not verify the quote was authentic or properly attributed.  We will update this entry if we find out more, but for now we rate this claim Unknown.