The blogs "Science and Space" and "AlbinoTurtles.com" have photographs of albino wood turtles.

A colorful photograph circulating online in November 2019 may be authentic, but experts we talked to suggested that readers should be wary of the source material.

The striking photo was featured on Science and Space, a blog that has no bylines and no masthead identifying an editorial staff: 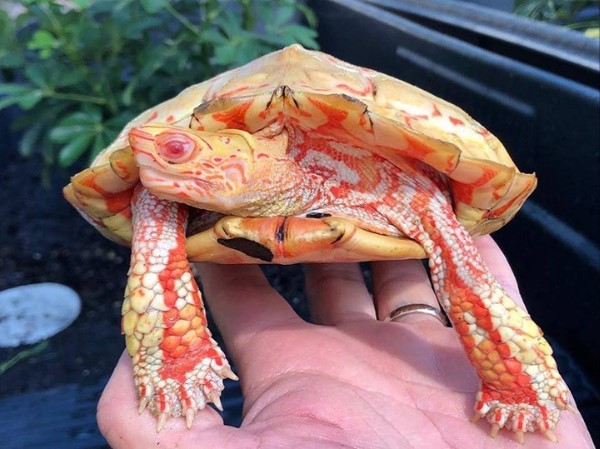 The description is similarly light on details, with no information on where or when the photograph was allegedly taken:

This is an Albino Rhinoclemmys pulcherrima, also known as the painted wood turtle. Albino Wood Turtles are one of the rarest turtle morphs in the world.

The only listed source is another site light on details, albinoturtles.com. In that light, it is unclear whether the photograph is authentic.

“We cannot definitively say that this animal in the pictures is real,” said Julie Levans, the senior curator of fishes, invertebrates, and herpetology for the Virginia Aquarium and Marine Science Center. “If it is, our team believes that it is a leucistic turtle (rather than fully albino). This is not unheard of in the animal kingdom (we have a leucistic Kemp’s ridley sea turtle at the Virginia Aquarium), but the coloration is notable.”

Albino turtles themselves are known to exist, and they have been covered by other news outlets in the past. CNN, for example, was among the news sites who published photographs of Alby, an albino green turtle spotted in Australia in February 2016: 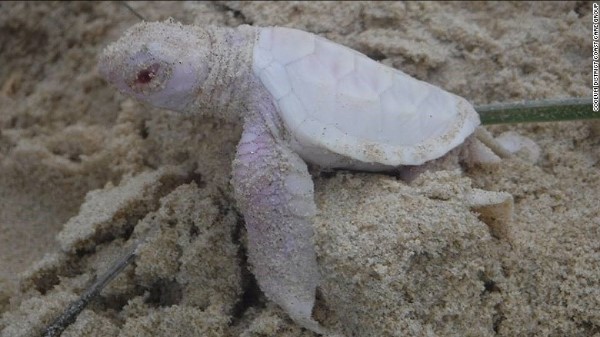 According to Sea Turtle Camp, a marine biology program based in Wilmington, North Carolina, leucistic animals have “normally colored eyes,” unlike albino animals.

“Since all pigment cell-types differentiate from the same type of precursor cell leucism can display itself in different ways,” the camp’s website states.

If not every cell is defective the animals with have patches of discoloration, this partial leucism is known as a ‘pied’ or the ‘piebald’ effect. If all the cells malfunction it will cause a reduction in all types of pigment resulting in a completely white animal. This universal type of leucism is often mistaken for albinism.

Jeffrey Lovich, a research ecologist for the United States Geological Survey, told us that “it’s certainly conceivable” that albino painted wood turtles could exist. But he said that he could not vouch for the credibility of the photograph, even though albinism is present in some turtle species.

“People can post anything they want on the Internet,” he said. “For scientists like myself, we usually attribute the highest level of credibility to peer-reviewed scientific publications that document things like albinism in a particular species, because then you have peer review by other people to make sure that you’re sharing the facts.”

In other words, we are unable to authenticate the photograph one way or another, so share with caution.