Almost half of America thinks U.S. President Joe Biden is mentally unstable, according to a September 2021 poll.

On September 20 2021, a TrendingPolitics.com post headlined, “Almost Half of America Thinks Biden is Mentally Unstable According to New Poll” appeared on Trendolizer as extremely popular, claiming:

According to a new poll conducted by Fox News, only 49% of American voters think President Joe Biden is mentally stable enough to serve as president of the United States.

The shocking poll comes after President Biden continues to fail the American people and the world.

Respondents of the poll were asked, “Do you think Joe Biden has the mental soundness to serve effectively as president, or not?”

The site quoted but did not link to Breitbart.com for the following excerpt:

TrendingPolitics  — a site which favors headlines about “shocking polls” — included a direct link to the poll [PDF]. Its first page explained that the poll consisted of 1,002 registered voters, and included verbiage covering redacted portions of the poll:

Conducted September 12-15, 2021. This Fox News Poll includes interviews among 1,002 registered voters (RV) nationwide who were randomly selected from a national voter file and spoke with live interviewers. Landline (164) and cellphone (838) telephone numbers were selected for inclusion using a probability proportionate to size method, which means phone numbers for each state are proportional to the number of voters in each state.

Results based on the full sample have a margin of sampling error of ± 3 percentage points.

As for the question, it appeared on page five of the published Fox News poll:

As reported,  Fox News used the question in polls in July and September 2020. Chronologically, the “yes,” “no,” and “don’t know” responses were as follows:

In September 2020, one year prior to this particular poll and the ensuing headlines, the exact same number of “yes” responses were recorded, at 49 percent; the “almost half” was still applicable. What changed was that two percentage points moved from the “don’t know” column to the “no” column between the September 2020 and September 2021 polls. (Results “based on the full sample have a margin of sampling error of ± 3 percentage points.”)

Here’s how the coverage looked at the time: 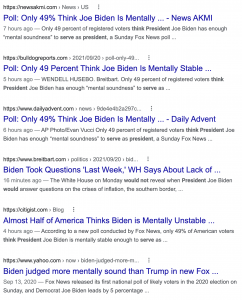 On page 23 of the poll, demographic breakdowns were published for the September 2021’s question, “Do you think Joe Biden has the mental soundness to serve effectively as president, or not?” Those breakdowns made it easy to see how partisan extremes influenced the poll’s aggregate percentages:

On September 20 2021, TrendingPolitics.com and other outlets carried items with titles like “Almost Half of America Thinks Biden is Mentally Unstable According to New Poll,” suggesting novel polling information indicated Americans newly lost faith in President Biden’s “mental soundness.” In actuality, the question was asked in at least two prior polls by Fox News, the most recent of which (September 2020) had a nearly identical polling result. Although the Fox News poll does exist, as with many such headline-grabbing reports, much of the contect was left out completely.