A meme shows a number of Soviet "Space Race" firsts, achievements of which many Americans are unaware.

On November 9 2019, a post to Reddit’s r/socialism made a titular claim that Americans “think they won the space race”:

Americans are so brainwashed that they think they won the space race. from socialism

Another meme had previously appeared on Reddit, and it was shared to r/HistoryMemes on May 12 2019:

The Space Race from HistoryMemes

Identical memes featured Excel or spreadsheet-style lists of the purported events of “the Space Race,” with a description and image in the left column and a flag on the right. Of its eleven Space Race events, ten are credited to the USSR and one (first man on the moon) to the United States.

At the bottom of the meme, text read “Winner of the space race” alongside a smiling U.S. President Richard Nixon and an American flag. In essence, the meme argued that Americans were broadly unaware of the USSR’s many achievements in terms of space exploration, believing that the moon landing was the sum of that “race.”

In order, the events were listed:

On a “Space Race” page hosted by the (American) Smithsonian Institute, the Space Race is described as “the space rivalry between the United States and Soviet Union and its aftermath” at the beginning of a gallery of photographs commemorating space exploration:

Soon after World War II, the United States and the Soviet Union became locked in a global conflict pitting democracy against communism. Space became a critical theater in this Cold War, as each side competed to best the other’s achievements in what became known as the Space Race.

This gallery tells about that U.S.-Soviet space rivalry and its aftermath, from the military origins of the Space Race, through the race to the Moon and the development of reconnaissance satellites, to cooperative ventures between the two former rivals and efforts to maintain a human presence in space. Some of the many highlights include a German V-1 “buzz bomb” and V 2 missile, Soviet and U.S. spacecraft and space suits, a Skylab Orbital Workshop, and a full-size test version of the Hubble Space Telescope.

The National Aeronautics and Space Administration (better known as NASA) hosts a timeline of space exploration on its site, but it was focused solely on American achievements in space. Nevertheless, NASA’s shift in focus from terrestrial aeronautics to a nascent space program was, according to NASA, was catalyzed by the Soviet Sputnik launch in 1957:

Abe Silverstein becomes manager of the lab’s research activities and reorganizes to explore high energy rocket propellants and nuclear propulsion. The launch of Sputnik in the fall of 1957 led to an almost complete redirection into space-related studies.

NARA’s timeline for the dates in question in large part agrees with with the meme, listing the same order of achievements up through the 1969 moon landing. NARA’s list made note of subsequent American achievements, and we have bolded the points of convergence with the meme:

1957
October 4 – The Soviet Union launched the first satellite, Sputnik, into space.
November 3 – The Soviet spacecraft Sputnik 2 was launched with a dog named Laika on board. Laika did not survive the voyage.

1960
August 19 – The Soviet craft Sputnik 5 was launched, carrying the dogs Strelka and Belka. They became the first living beings to survive a trip into space.

1967
January 27 – Astronauts Gus Grissom, Ed White, and Roger Chaffee were killed in an accidental fire in a command module on the launch pad.
April 24 – Cosmonaut Vladimir M. Komarov was killed in a crash when the parachute on his Soyuz 1 spacecraft failed to deploy.
October 18 – A descent capsule from the Soviet probe Venera 4 collected data about the atmosphere of Venus.

After the moon landing, USSR achievements were again listed alongside those of the United States:

1971
April 19 – The Soviet space station Salyut 1 was launched.
July 30 – The moon rover was driven on the moon for the first time.
November 13 – The Mariner 9 probe became the first craft to orbit another world – Mars.

A point of divergence between the meme and various lists was the December 1971 Mars 3 entry, “first spacecraft landing on Mars.” It did not appear on NARA’s list, and Space.com’s list of Mars explorations describes concurrent missions from both the USSR and the United States throughout 1971:

Also in 1971, the Soviet Union finally met with success after several attempts to reach the Red Planet. Its Mars 2 orbiter, which launched May 19, 1971, arrived on Nov. 2. However, the Mars 2 lander crashed on the surface and was no longer operable. Mars 3, a lander and orbiter mission, launched on May 28, 1971, and arrived on the Red Planet Dec. 3. The lander worked for only a few seconds on the surface before failing, but the orbiter worked successfully.

The image of Mars changed with the arrival of NASA’s Mariner 9 in November 1971. The spacecraft, which launched on May 30, 1971, arrived at Mars when the entire planet was engulfed in a dust storm. What’s more, something mysterious was poking above the plumes of dust. When the debris settled to the surface, scientists discovered those unusual features were the tops of dormant volcanoes. Mariner 9 also discovered a huge rift across the surface of Mars, later called Valles Marineris — after the spacecraft that discovered it. Mariner 9 spent nearly a year orbiting the Red Planet, and returned 7,329 photos.

Both NARA and Space.com were cagey about who landed on Mars first. According to CNN, that particular achievement belonged to the USSR, and the provided date matched the meme:

December 2, 1971 — The USSR’s Mars 3 lander makes the first successful landing on the planet’s surface. It transmits data for 20 seconds before failing.

An ancillary point of debate in discourse around the meme held that Soviet cosmonauts were sent into high-risk situations, with at least one (Vladimir Komarov) famously dying under horrific circumstances, which was true. But as Space.com’s “Space Race” page and NPR noted, Americans died too:

The program got off to a horrific start on Jan. 27, 1967, when all three astronauts in the Apollo 1 capsule were killed during a launch rehearsal test that sparked a huge fire. But that catastrophic failure generated extensive redesigns of the spacecraft and a commitment to ensuring that the crew did not die in vain.

Among artifacts of the successful moon landing, courtesy of NARA, was a prepared statement for President Nixon in the event it ended in tragedy: 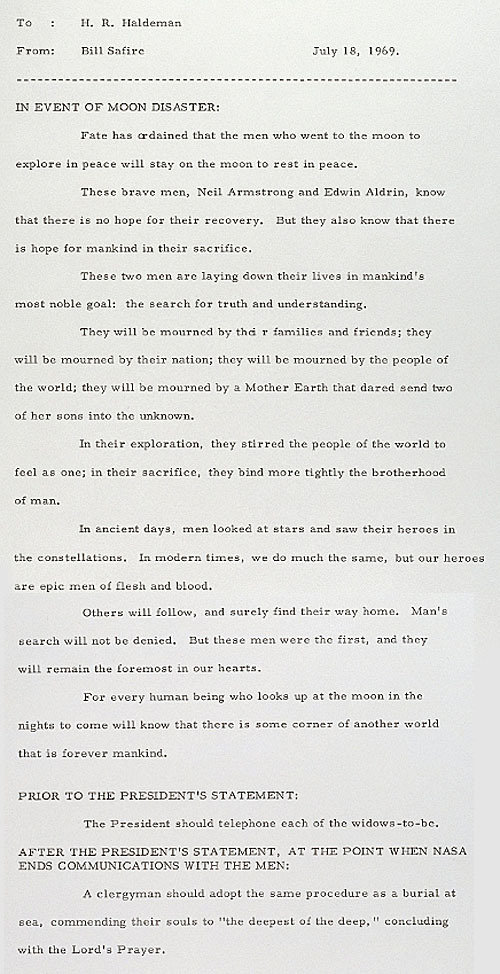 That document, prepared by Nixon speechwriter William Safire (and known as the “Safire Memo”) [PDF] read:

IN EVENT OF MOON DISASTER:

Fate has ordained that the men who went to the moon to explore in peace will stay on the moon to rest in peace.

These two men are laying down their lives in mankind’s most noble goal: the search for truth and understanding.

In their exploration, they stirred the people of the world to feel as one; in their sacrifice, they bind more tightly the brotherhood of man.

In ancient days, men looked at stars and saw their heroes in the constellations. In modern times, we do much the same, but our heroes are epic men of flesh and blood.

Others will follow, and surely find their way home. Man’s search will not be denied. But these men were the first, and they will remain the foremost in our hearts.

For every human being who looks up at the moon in the nights to come will know that there is some corner of another world that is forever mankind.

PRIOR TO THE PRESIDENT’S STATEMENT:

The President should telephone each of the widows-to-be.

AFTER THE PRESIDENT’S STATEMENT, AT THE POINT WHEN NASA ENDS COMMUNICATIONS WITH THE MEN:

A clergyman should adopt the same procedure as a burial at sea, commending their souls to “the deepest of the deep,” concluding with the Lord’s Prayer.

Instructions that the astronauts’ “widows-to-be” first be notified via a phone call from President Nixon, and plans for a form of “burial at sea … commending their souls to the ‘deepest of the deep'” were included with the prepared statement.

A long-circulating meme about Soviet achievements in the “Space Race” was shared to Reddit in November 2019, with a new title claiming that “Americans are so brainwashed,” they believed the United States “won” that long-sought honor between two Cold War adversaries. Both the “brainwashing” of Americans as well as the “winner” of the Space Race were subjective metrics, leaving what might have been a cherry-picked list of achievements to check. The United States government’s NARA maintained a timeline of space achievements, which broadly aligned with the meme and featured no major disputes. Neither did the list leave off any noteworthy American achievements in its presentation. Although the United States was first to put a man on the moon, a number of earlier and subsequent firsts were achieved by the former USSR. The meme is in essence true, although elements of its framing are definitely subjective.