United States Army Gen. Jonathan Wainwright wrote a letter to discharged troops after World War II telling them, "You have seen what happens when a nation accepts hate and intolerance."

A New Jersey congressman attracted some attention online with a historical post apropos of Veterans Day in November 2019 — and some skepticism.

“I’d like to share a letter that a constituent of mine recently found in the papers of her father, a WWII vet,” Democratic Rep. Tom Malinowski wrote on Twitter:

It looks like it was send to all soldiers discharging from the Army at the end of the war. 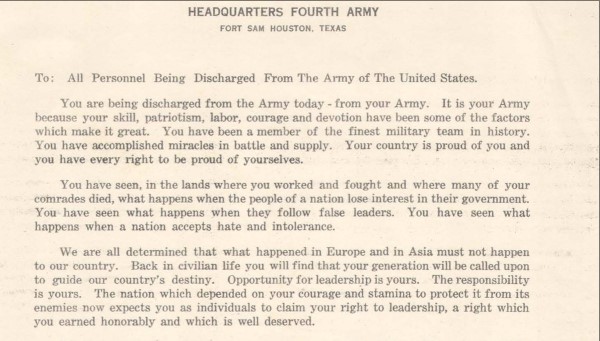 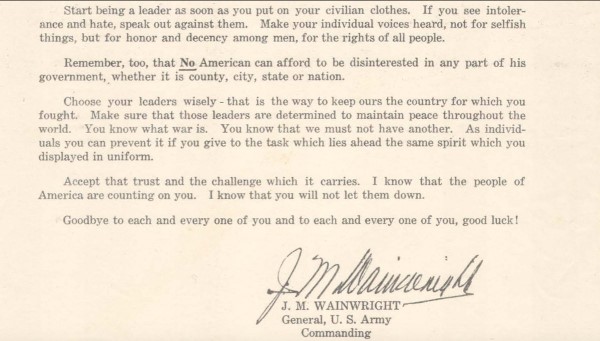 The letter is legitimate. Both a photograph of it and a transcript of Wainwright’s message have been archived online. He wrote:

You are being discharged from the Army today — from your Army. It is your Army because your skill, patriotism, labor, courage and devotion have been some of the factors which make it great. You have been a member of the finest military team in history. You have accomplished miracles in battle and supply. Your country is proud of you and you have every right to be proud of yourselves.

We are all determined that what happened in Europe and in Asia must not happen to our country. Back in civilian life you will find that your generation will be called upon to guide our country’s destiny. Opportunity for leadership is yours. The responsibility is yours. The nation which depended on your courage and stamina to protect it from its enemies now expects you as individuals to claim your right to leadership, a right which you earned honorably and which is well deserved.

As chronicled by Army Major John Sparrow, the troop discharge effort for the United States at the end of that conflict was the largest in the country’s history. In his book History of Personnel Demobilization in the United States Army, an entire division was set aside to carry out the process.