Prior to being caught on video engaging in racist harassment, Amy Cooper donated to the presidential campaigns of John Kerry, Barack Obama, and Pete Buttigieg.

Amid the fallout of Amy Cooper’s firing for her racist harassment of Christian Cooper in May 2020, some social media users began trying to parse her political leanings as an evidence-free opinion piece in a British publication added fuel to the fire.

The op-ed, published in the Independent on May 26 2020, recapped the story of the encounter — which led to Amy Cooper being terminated from her position at the investment firm Franklin Templeton — before veering into political speculation:

In response to the video, many on social media began to speculate and insist that Amy Cooper was a Trump supporter and a member of the “MAGA” movement.

However, campaign contribution information — with donations to Democrats such as Barack Obama, Pete Buttigieg, and John Kerry — leaked online earlier today appeared to suggest that Amy actually identifies as a liberal. This matters, because in this political era, during this most critical US presidential election, it is necessary that we understand and recognize that white violence transcends party lines and political ideology.

However, the piece does not offer any proof of donations from Cooper to any of those candidates. Instead, it hedges further:

There’s a chance the Amy Cooper we see in that viral video may not be the same Amy Cooper whose details were leaked onto social media — but as a New York City resident, she’s still statistically much likely to be a Democrat than a Republican, and the conversation about white liberal racism is long overdue.

According to data from the Federal Elections Commission, at least two people identified as “Amy Cooper” made campaign contributions to Pete Buttigieg, who ran for the Democratic Party presidential nomination from April 2019 to March 2020; one such entry, in which the donor is listed as a speech pathologist, gave $3 to the “Pete For America” political action campaign, while another donor listed as “not employed” donated $125 to the same group: 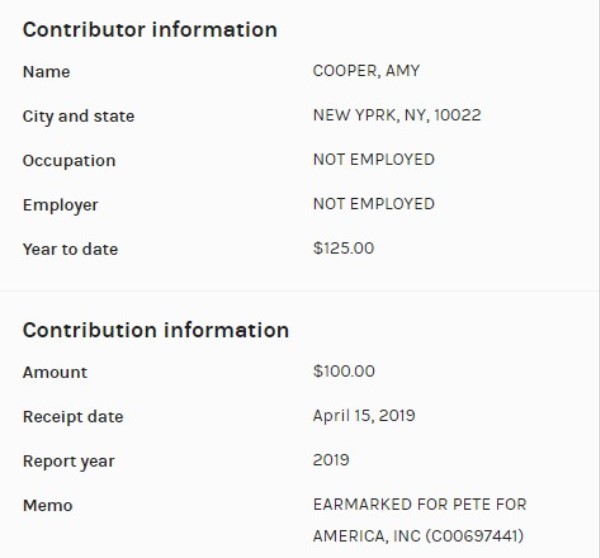 At least one Twitter account has also spread a photo of two donations to Obama’s re-election in campaign made by an Amy Cooper in New York:

I have to agree with this. Funny thing is Amy Cooper is a Democrat, she even donated to the Obama campaign. She was playing along with the racist view that cops will shoot unarmed black people on site. She was hoping the guy would be scared of the police and leave the scene. https://t.co/7gldtvZ2NA pic.twitter.com/z3IhHThQAu

Looking at those donations, however, the New York City-based Amy Cooper who donated $1,550 to Obama’s campaign that year was listed as “retired” by the FEC: 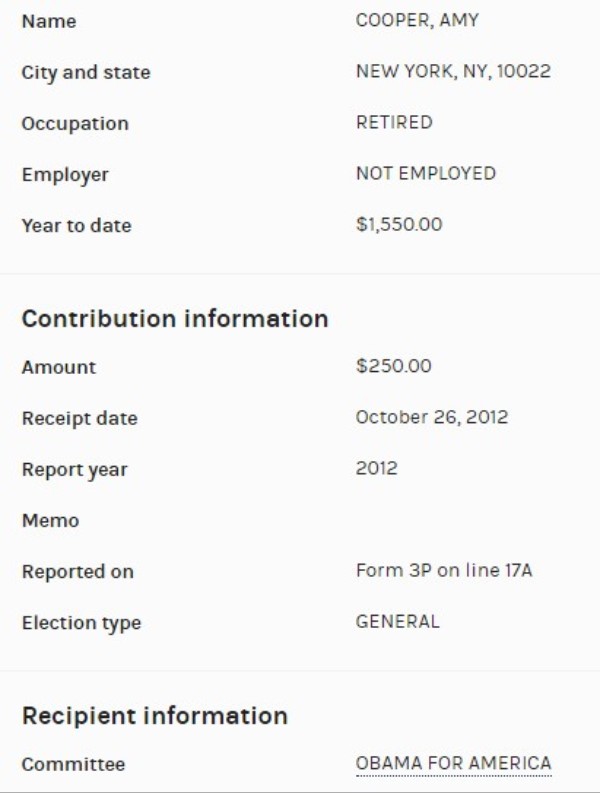 It is unlikely that the Amy Cooper caught on video was retired, and unclear whether she would have been able to contribute to any presidential campaign at the time. As Heavy.com reported, she was born in Canada:

Amy Marie Cooper, a native of Canada, according to her Instagram profile, studied at the University of Waterloo in Ontario from 1998 to 2003, graduating with a degree in actuarial science. She also completed her master’s in business administration in analytical finance at the University of Chicago Booth School of Business in 2009. Before working at Franklin Templeton, Amy Cooper worked at AIG, Citi, Lehman Brothers and Willis Towers Watson.

According to the Federal Election Campaign Act, foreign nationals are barred from donating or contributing to presidential campaigns unless they have proof of legal permanent residency in the United States; the identification for this status is commonly referred to as a “Green Card.”

Going back to Kerry’s presidential campaign in 2004, FEC records show a $250 donation from a person identified as “Amy L. Cooper.” However, photographs that circulated online of Amy Cooper’s LinkedIn page — which was quickly deleted as the video of her abusive display spread — lists her middle initial as M, short for Marie: 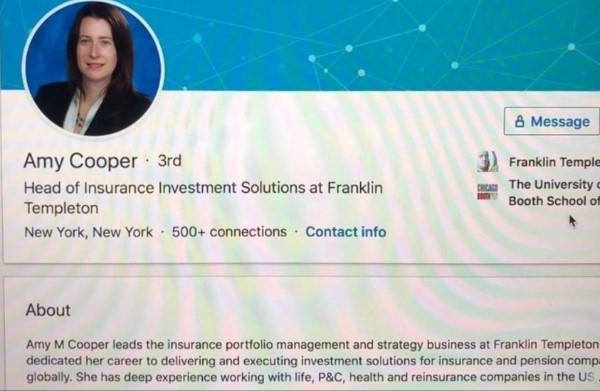 In any case, the rush to associate Amy Cooper with one political leaning or another is misguided. As anyone who has experienced it can tell you, racism cuts cleanly across any party line.