A chart titled "Major Events in USA History that Cause Major Death Tolls and 2019 Data" provides figures about COVID-19 deaths that are accurate as of May 23 2020.

In late May 2020, the following chart (attributed to a user named Mario Hardy) began circulating on Facebook, awkwardly titled “Major Events in USA History that Cause Major Death Tolls and 2019 Data”: 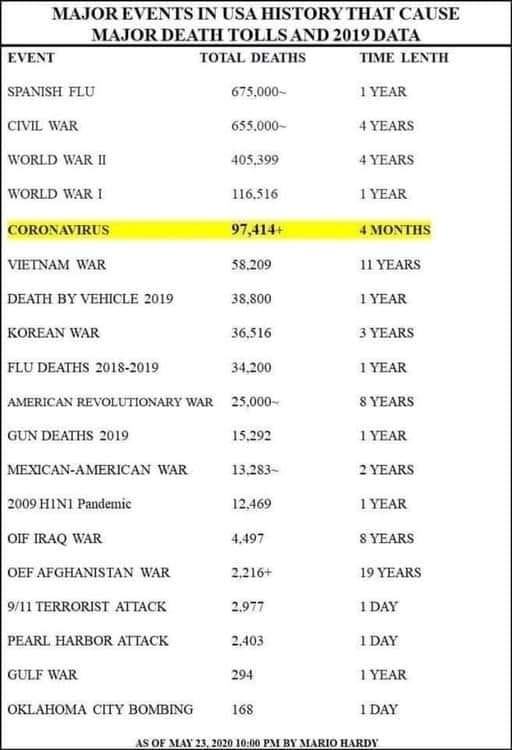 At the bottom of the chart, text read “as of May 23, 2020 10:00 PM by Mario Hardy.” It contained three headings (“event,” “total deaths,” and “time [length]”), and nineteen lines for major historical events and their purported mortality numbers in the United States. In the name, death toll, and duration format above, those events were listed as:

Just to put things in perspective. This is serious…Stay Home! #USA #COVIDー19

Although the chart was credited to a “Mario Hardy,” it seemed largely to appear in individual user posts rather than from any centralized post or site. If an individual by that name had originally posted the chart, we were unable to find it.

Text at the bottom of the chart also indicated that it was either created on or intended to be accurate as of 10 PM on May 23 2020. That said, the entries on the list were a mixed bag of fixed events in United States and world history (such as World Wars I and II), and individual yearly death statistics for random causes (automobile accidents, gun violence, or flu) in the years 2018 and 2019.

Based on information in the image, the COVID-19 death toll statistic was intended to be a snapshot in time — marked the evening of May 23 2020. The same precise number (97,414) appeared in a very popular tweet published at 11:18 PM on the same date:

That tweet made reference to widely reported crowds at the Lake of the Ozarks in Missouri. One of the viral images was captured in Twitter Moments:

Despite the state of Missouri’s social distancing guidelines, images are emerging of at least one packed venue in the Lake of the Ozarks.https://t.co/zkOlJdGHv6

Purported War Deaths on the Chart

We attempted to verify the “war deaths” claims, and noticed that in late April 2020, National Geographic had contrasted the number of COVID-19 deaths in the United States at that time with death tolls for various wars. However, the numbers at which the magazine arrived were not really in line with the numbers on the chart: 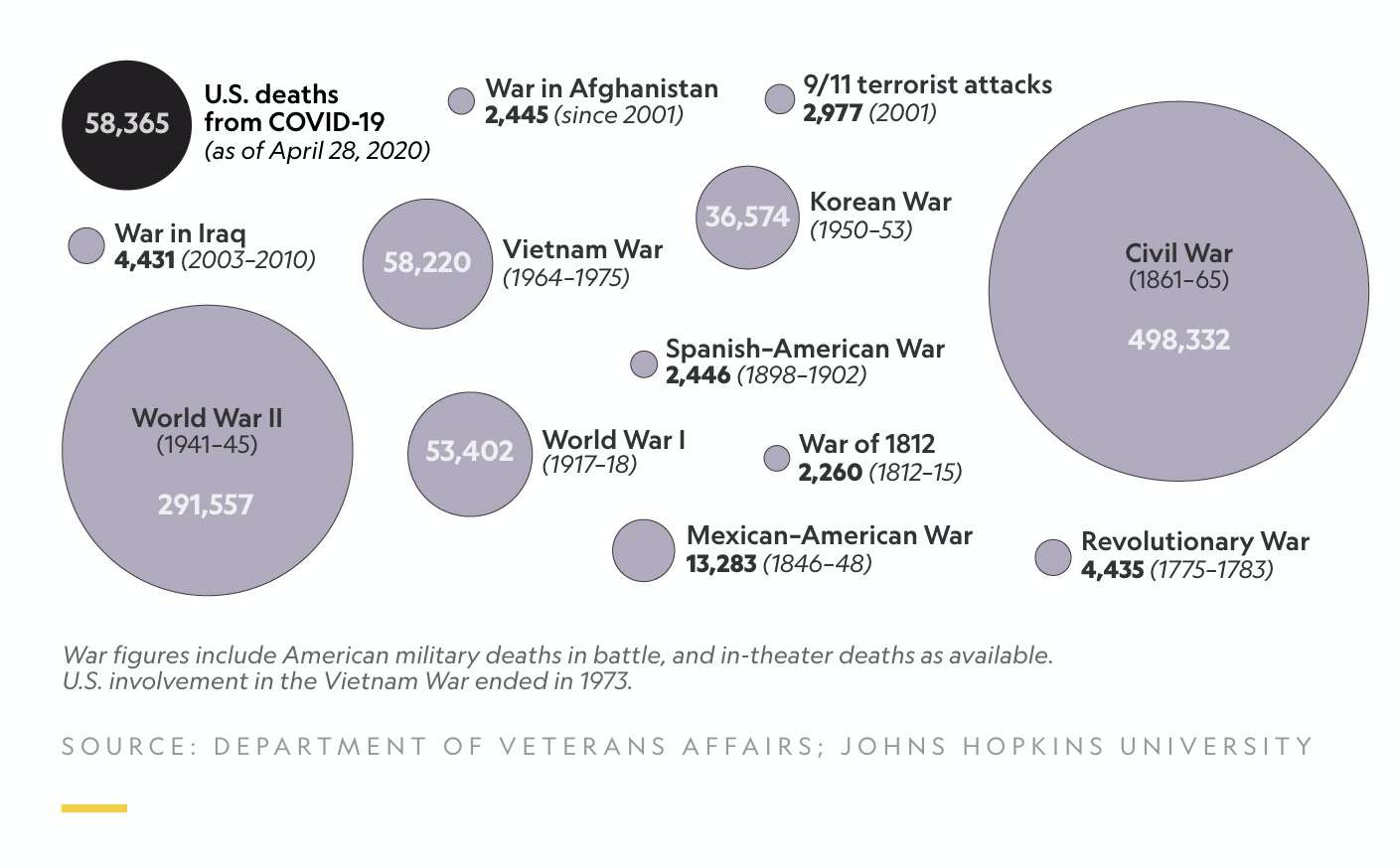 The Department of Veterans’ Affairs hosted a document simply titled “America’s Wars” [PDF], and it provided figures similar to those of National Geographic, although they were broken down differently:

And so on. A rough estimate of Civil War deaths combined added up to the 498,000 figure provided by National Geographic, not 655,000+ as the chart suggested. It was unclear from where or by whom the figures were derived, but many of them appeared to be off by a significant number.

The only reference we could find that mentioned precisely 97,414 COVID-19 deaths in the United States was in the tweet embedded above; resources providing the exact number of deaths due to COVID-19 typically updated constantly, and as a result did not include easy access to prior days’ numbers.

As of May 26 2020, the widely-referenced COVID-19 Dashboard by the Center for Systems Science and Engineering (CSSE) at Johns Hopkins University (JHU) listed the total American death toll of COVID-19 to be a very similar 98,787. A contemporaneous report by NBC News placed the death toll at just over 100,000:

One hundred thousand coronavirus deaths in the U.S. is the low estimate [as of May 26 2020].

Already, the death toll in the U.S. has eclipsed those of every other country.

Although the chart attributed to Mario Hardy (“Major Events in USA History that Cause Major Death Tolls and 2019 Data”) was roughly accurate in terms of COVID-19 deaths in the United States (hovering at approximately 100,000 as of May 26 2020), some of its other base data didn’t match information on death tolls for various wars. The chart cited no sources, and the only 97,414 figure we located was in a similarly popular — and similarly sourceless — tweet published at around the same time the chart began spreading. It was certainly true the COVID-19 death toll in the United States eclipsed the death toll for various wars, but the balance of information was not aligned with any statistics we could find for battle and theater deaths in wartime.