There is an "ANTIFA debit card" available to buy online for protesters to reload after "rioting."

A self-professed “targeted individual” on Twitter apparently had his hackles raised by a group of German satiricists enough to try to use their work to gin up fears about “Antifa.”

“Ever seen an Antifa debit card that can automatically be funded after looting, rioting, and gang stalking?” Michael Barden wrote. “Here’s what it looks like.” 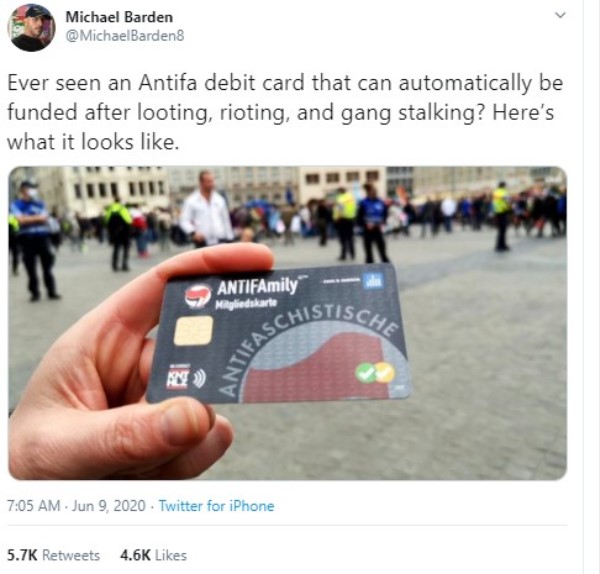 We contacted the creators of the card, Hooligans Gegen Satzbau — one translation of the name in English is, “Hooligans against Sentence Construction” — and they replied, “Of course, the ANTIFAmily Card is real” and referred us to their shop offering the “BASIC” and “Platinum” options:

The group promises that “BASIC”-level card users will enjoy benefits, including “demo money digitally immediately according to anti-administrative law,” discounts on fast food, and monthly vouchers for “black textile” clothing among other benefits. The “Platinum” card, however, offers more pointed benefits that clearly showed the satirical intent of the card:

The benefits are presented with “satiresfaction guarantee” with a disclaimer:

All statements without guarantee. Offers are only valid if the potential contract partner (s) is / are the owner of such a card and/or has/wants to. #HoGeSatzbau are not a contractual partner.

“With the ANTIFAmily©-Card you commit yourself to stand up against racism, fascism and exclusion at all times and to respect everyone equally – no matter what denomination, skin colour, origin, language or sexual orientation etc.”
George Soros

Yes, Mr. Fuck you @realDonaldTrump, we are all #ANTIFA provocateurs! pic.twitter.com/O67zJPKB9t

Given that Barden’s Patreon only has five subscribers, it’s possible that his original post was an attempt to gain attention by regurgitating the widely-refuted claim that “antifa” — that is, anti-fascist protesters — is an organized and violent movement rather than simply a descriptor for those who do not wish to live under fascist policies. The conspiracy theory, amplified by Trump, has spurred right-wing and white supremacist vigilante groups to appear opposite protests against police brutality around the United States, under the pretext of “protecting against rioting.”

In reality, it has been reputed members of white supremacist groups like the “Boogaloo boys” and the Ku Klux Klan who have been arrested in connection with violent incidents or plans to commit terrorist attacks — members of the very types of far-right groups against which anti-fascists, or “antifa,” stand.