In a viral Facebook post, "if you see the baby you are part of a minority who can see 'paranormal' things."

A June 9 2020 Facebook post featured a grainy, black and white image of a baby at a window — as well as a claim the “minority” of people were unable to see the baby, and that those who did were able to see “paranormal things”:

On the same day, the same image and claim were shared to Twitter. Although engagement numbers weren’t as massive as the “baby” post on Facebook, users were still very engaged in discussion of the photograph and its alleged ability to root out the seers among us:

Facebook allowed for a far longer story to be shared alongside the image, and the original poster wrote:

if you see the baby you are part of a minority who can see “paranormal” things idk. If you don’t see it, you can’t see those things.

Over on Twitter, the poster was a bit more cryptic:

Pls tell me what do you see in this picture

However, in subsequent tweets, the user shared a very similar story about the baby in the window:

Of course, both posts were peppered with replies like this and this, where users claimed to be unable to “see the baby”:

Other replies stretched it a bit more, with replies like this: 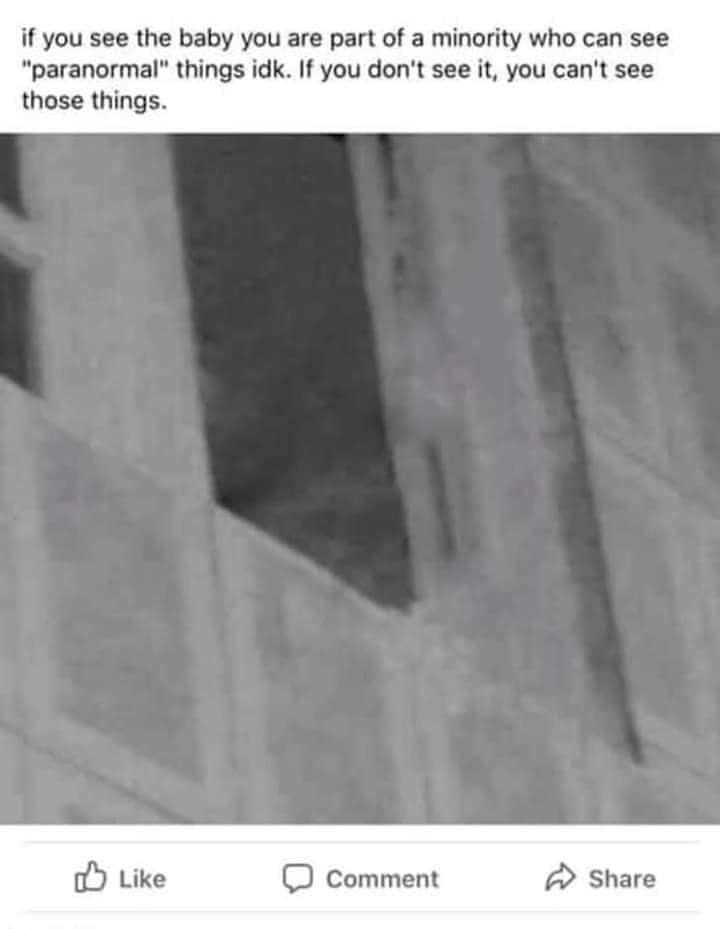 This Meme Is Old

It also bears mentioning the meme was nowhere near new in June 2020; we located iterations as far back as 2016:

‘If You See the Baby You Are Part of a Minority…’

We should get one thing out of the way — it was obvious that the photograph showed only a window, with no visible baby.

Kidding! We’re kidding! But the posts always said some form of “if you see the baby you are part of a minority who can see ‘paranormal’ things,” a statement that immediately fell apart under even the most casual scrutiny.

While a few people swore they saw no baby in the image, the vast majority of commenters “saw the baby.” They were clearly not a small “minority” of people, and the entire reason the photograph spread so often and so much was that everyone sees the baby: 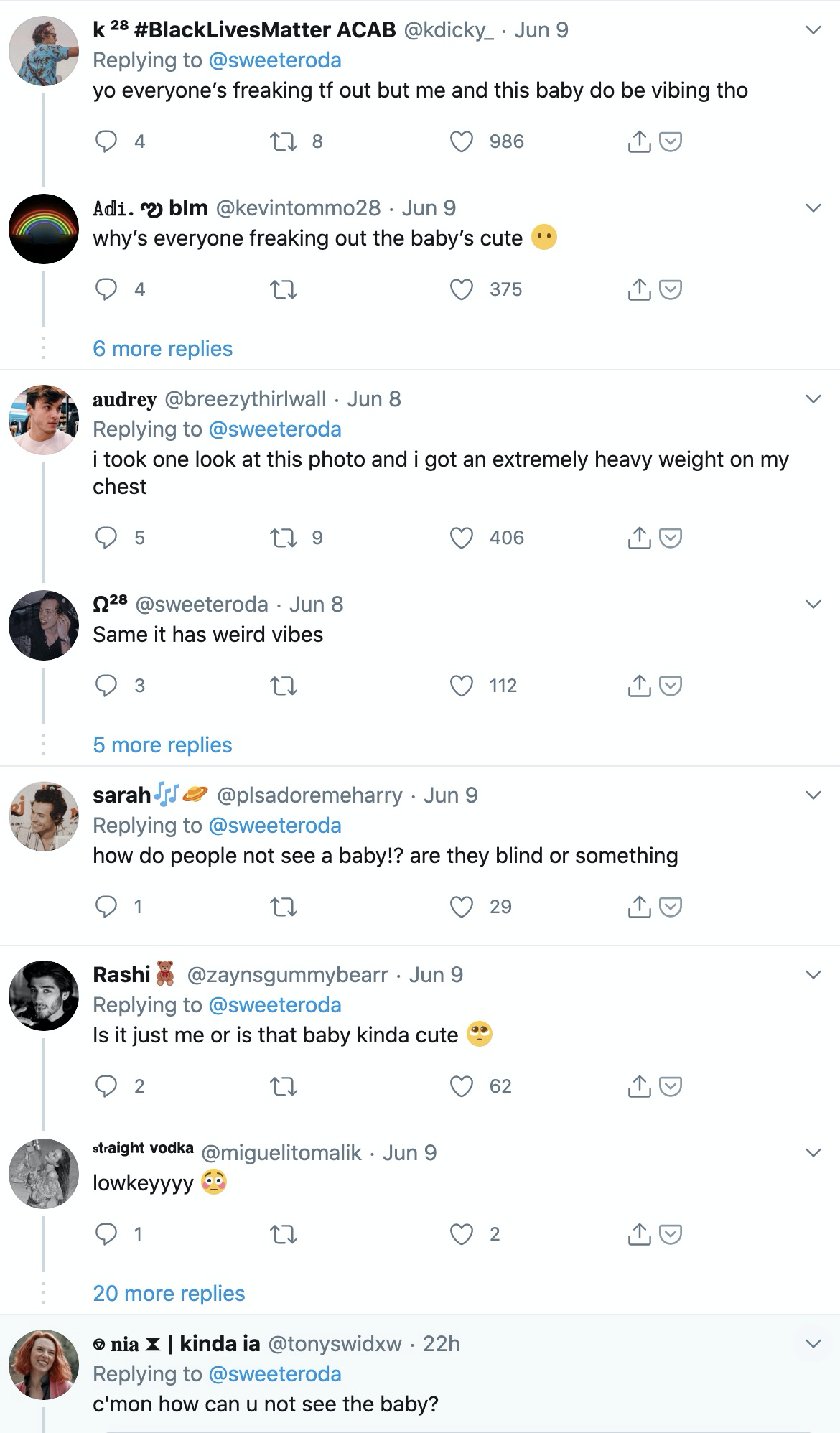 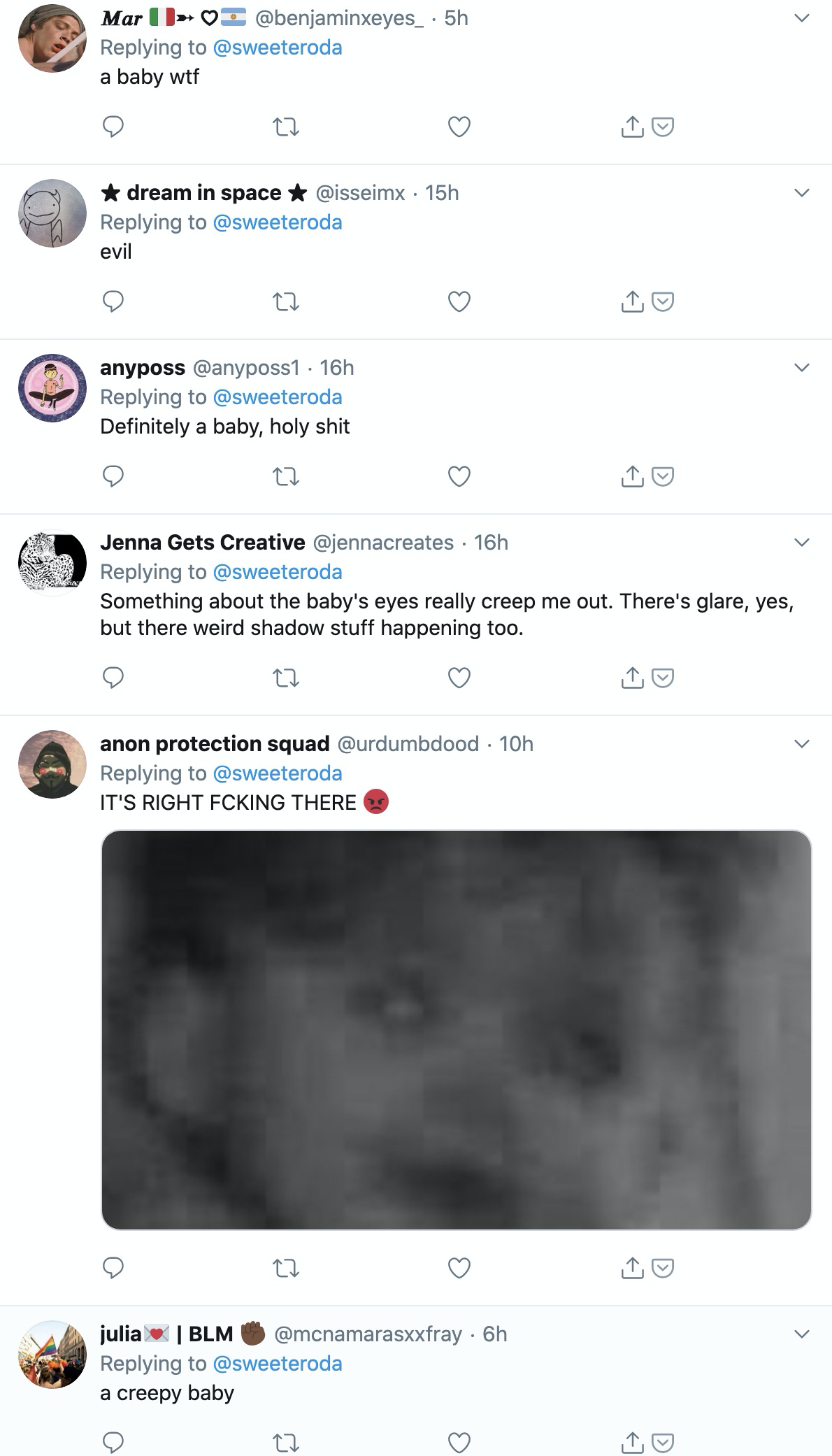 Engagement Bait and How It Spreads

We also noticed we’ve seen this form of commenters advancing engagement bait before — like in the Facebook “Hocus Pocus Witch Checker” or “911 Snitch” memes.

Part of the reason the post spreads is that some commenters are “in on the joke,” and help to create the impression that not all people are seeing or experiencing the same thing. In order for the meme to continue spreading, it requires in-joke participation — up to and including the edited baby-free window.

Moreover, not all engagement bait is spread intentionally. When we first noticed the post, it had about 8,000 shares — and just twelve hours later, it was over 130,000 shares. Facebook and Twitter users typically shared the “baby in the window” post on because they either believed the claim or found it funny, and each variation was popular in its own right.

Plus a Humorous Coincidence

Another “paranormal” fact check we did involved the random generation of a string of letters as rumored after-death communication.

The term “after death communication” or “ADC” refers to purported communication from those who have died, and after YouTuber Etika died and promised to send a message if possible, his on-and-off girlfriend appeared to receive one in that particular format:

We quoted an iteration of the many posts and discussions about the June 2019 livestream during which that incident reportedly took place:

[In late June 2019], Etika’s on and off girlfriend held a tribute stream for his friends after he was confirmed dead.

About 14 minutes in, she was creating a room for online play in Super Smash Ultimate for everyone to join. When she went to give everyone the code, it read M4GGY.

For those that understand why it was important, Etika always called her Magnolia or Maggy to tease her. The room code itself is always random so this is one hell of a coincidence. And it happened in a Smash stream no less

The Wet Blanket Part of the Page

A years-old, long-circulating image of a baby at a window accompanying a claim that “if you see the baby you are part of a minority who can see ‘paranormal’ things” recirculated virally in June 2020, and the post was largely engagement bait. There was a baby visible at the window, but some claimed otherwise to keep the joke moving along. The image was definitively of a baby and a window, and no one was unable to see the baby.