A woman protesting stay-at-home measures related to the COVID-19 pandemic was photographed holding a sign saying "work is freedom."

Several photographs emerged online on May 1 2020 purportedly showing right-wing protesters — and in one case a child — displaying a Nazi slogan. But at least one of the images was manipulated digitally.

As the Associated Press reported, a photograph of a woman holding up a sign saying “work sets you free” — an English-language translation of “arbeit macht frei,” the phrase displayed at the gates of the Dachau and Auschwitz concentration camps — surfaced on Twitter, albeit posted in some instances to criticize demonstrators objecting to measures designed to slow the spread of the COVID-19 pandemic:

But the real photograph, taken by Andrew Rush of the Pittsburgh Post-Gazette and posted on Twitter on April 20, 2020, shows that the unidentified woman’s sign actually says, “Free small business.” 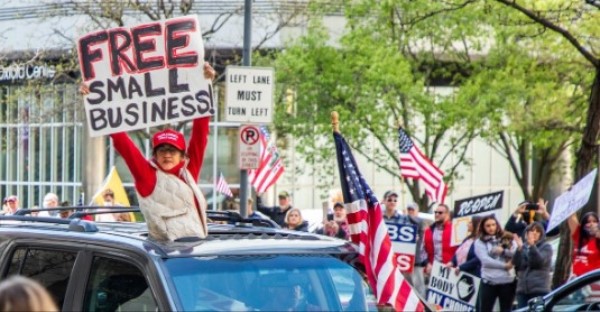 However, another photograph showing someone displaying the original German phrase, addressed toward Illinois Gov. J.B. Pritzker, was also posted online accompanied by a first-person account.

“This was one of the signs at the ‘Re-open Illinois’ event today,” Dennis Kosuth wrote on his own Twitter post. “She assured those that she was not a Nazi, and stated, ‘I have Jewish friends.’ Thank you for representing yourself and your ‘movement’ for what it is.”

This was one of the signs at the “Re-open Illinois” event today. She assured those that she was not a Nazi, and stated, “I have Jewish friends.” Thank you for representing yourself and your “movement” for what it is. pic.twitter.com/CcIX2SVu6s

“Our side was horribly outnumbered,” said Kosuth, a nurse by trade. “About 15 other nurses stood there in an attempt to put a different narrative forward. We were told that we are ‘actors.'” Kosuth’s photograph attracted the attention of the Auschwitz Memorial, which said:

“Arbeit macht frei” was a false, cynical illusion the SS gave to prisoners of #Auschwitz. Those words became one of the icons of human hatred. It’s painful to see this symbol instrumentalized & used again to spread hate. It’s a symptom of moral & intellectual degeneration.

The Illinois protest was one of a series of demonstrations calling for stay-at-home orders and similar mandates to be lifted. The events, often organized via Facebook, have attracted various far-right and anti-vaccination attendees.

Another photograph displaying the phrase was also shared online, purportedly on a sign being held by a child. One iteration of the photo contains a caption directing users to a website promoting anti-government rallies as well as a video posted by the right-wing group Patriot Prayer USA. That group’s leader, Joey Gibson, is currently facing a $1 million civil lawsuit in connection with a clash between Patriot Prayer members and anti-fascist protesters at a bar in Portland, Oregon. In November 2019, a Multnomah County judge denied Gibson’s request that the suit be thrown out.