As armed demonstrators descended on the Michigan statehouse in Lansing on April 30 2020, the footage became a point of contention online.

The video, first posted by WDIV-TV business editor Rod Meloni, shows a group of protesters demanding to be let into the state House chambers. It was shared on Twitter thousands of times but gained much more attention after it was reposted by another user, Rob Gill. “Multiple armed gunmen storm Michigan’s State House, State police are protecting @GovWhitmer and blocking the gunmen from gaining access to the house floor,” Gill wrote. “This is America in the age of Trump.”

This is America in the age of Trump. pic.twitter.com/tLWR2bvjtR

That popular tweet was quickly refuted by Associated Press reporter David Eggert. “This is false,” Eggert wrote, without immediately explaining. He later elaborated, saying, “No one ‘stormed’ the Capitol. It is legal to carry guns openly in the statehouse (some guys had guns in Senate gallery). House was closed to public to make room for legislators to socially distance. Whitmer was not there.”

Gill responded by reposting a photograph originally published by state Sen. Dayna Polehanki showing other demonstrators carrying firearms. “Directly above me, men with rifles yelling at us. Some of my colleagues who own bullet proof vests are wearing them,” Polehanki wrote. “I have never appreciated our Sergeants-at-Arms more than today.”

Directly above me, men with rifles yelling at us. Some of my colleagues who own bullet proof vests are wearing them. I have never appreciated our Sergeants-at-Arms more than today. #mileg pic.twitter.com/voOZpPYWOs

The dispute surrounding Gill’s choice of video illustrated how even accurate reporting around anti-government protests describing stay-at-home measures as “tyranny” can omit further details. Both the Associated Press and United Press International, for example, reported on the demonstration. The AP described attendees as “hundreds of conservative activists.” And UPI did mention that the event was organized by a group calling itself Michigan United for Liberty.

But neither report accounted for evidence demonstrating that the rash of “grassroots” protests around the United States were in fact organized on Facebook by right-wing groups and supported by white nationalists, anti-Semites, and anti-vaccine “truthers,” among others. The AP has also reported that according to its own polling, these events do not enjoy popular support:

Only 12 percent of Americans say the measures where they live go too far. About twice as many people, 26 percent, believe the limits don’t go far enough. The majority of Americans — 61 percent — feel the steps taken by government officials to prevent infections of COVID-19 in their area are about right.

About 8 in 10 Americans say they support measures that include requiring Americans to stay in their homes and limiting gatherings to 10 people or fewer — numbers that have largely held steady over the past few weeks.

Those statistics were not mentioned in the AP report on the Lansing protest. And while UPI mentioned the organizing group behind the event, it did not mention Michigan United for Liberty’s online claim that the death toll for COVID-19 — listed at 3,789 people in Michigan — was overblown: 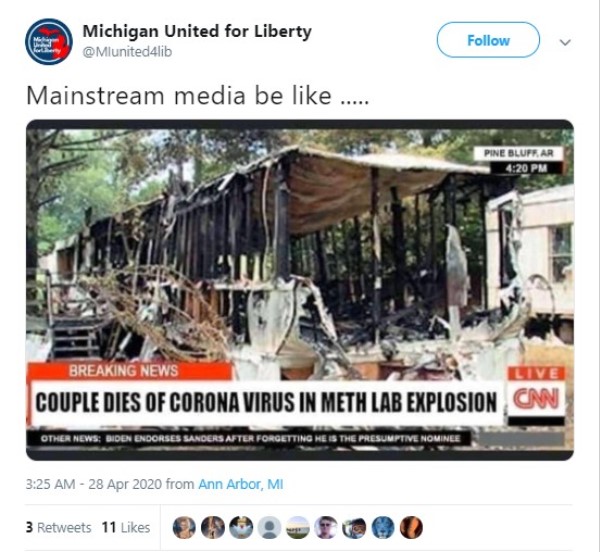 Social media users have also criticized the apparent discrepancy in how these anti-government protests, heavily attended by white Anglo people, are treated by law enforcement compared to demonstrations against extrajudicial killings against Black communities by law enforcement, as well as other causes:

On the left: “Policing” during ADAPT’s Save The Afordable Care Act Protests.

On the right: Policing #Michigan “protesters” who want to spread the virus to black people. pic.twitter.com/2htJs5D7CE

Despite the outcry from both the right-wing protesters and Republican state lawmakers, Democratic Gov. Gretchen Whitmer acted to extend a state-of-emergency declaration on her part, closing bars, restaurants, and other public gathering sites through May 28 2020.

She also called the protest “disturbing” during a press briefing on May 1 2020. “Swastikas and Confederate flags and nooses and automatic rifles do not represent who we are as Michiganders,” she said.

In October 2020, six men were arrested as part of an ongoing investigation into threats against Whitmer that used social media as a tool for both recruitment and planning:

Charging documents stated that one suspect, Adam Fox, used a private Facebook group to hatch the plan to stalk Whitmer’s vacation home, abduct her, and take her to an undisclosed location in Wisconsin for a “trial.”

“He complained about the judicial system and the State of Michigan controlling the opening of gyms,” read one portion of the federal affidavit. “Fox referred to Governor Whitmer as ‘this tyrant bitch,’ and stated, ‘I don’t know, boys, we gotta do something. You guys link with me on our other location system, give me some ideas of what we can do.’ The video was preserved by the FBI.”

Fox and a Delaware man, Barry Croft, were convicted on August 23 2022 on charges of kidnapping conspiracy and conspiracy to use a weapon of mass destruction.

“Today’s verdicts prove that violence and threats have no place in our politics and those who seek to divide us will be held accountable. They will not succeed,” Whitmer said in a statement. “But we must also take a hard look at the status of our politics. Plots against public officials and threats to the FBI are a disturbing extension of radicalized domestic terrorism that festers in our nation, threatening the very foundation of our republic.”

Whitmer’s deputy chief of staff, Zach Pohl, said in June 2022 that her office was told that she was identified on a “list” of targets compiled by 56-year-old Douglas K. Uhde, who is suspected of shooting and killing retired federal judge John Roemer in Wisconsin.

“Governor Whitmer has demonstrated repeatedly that she is tough, and she will not be bullied or intimidated from doing her job and working across the aisle to get things done for the people of Michigan,” Pohl said in a statement.