Photographs and video taken of a COVID-19 anti-lockdown/"Reopen Tennessee" protest shows one participant holding a sign reading "sacrifice the weak."

On April 22 2020, what appeared to be a screen capture of a WKRN-TV segment about a “Reopen TN (Tennessee)” anti-lockdown protest went viral on Twitter, showing a protester with a sign that read, “Sacrifice the weak, re-open TN”:

"Sacrifice the Weak" – imagine not just thinking of this but actually writing it out AND taking it out on the street in Nashville, Tennessee. pic.twitter.com/dLPutBoJzG

Verbiage on the sign — and the explicit claim that lawmakers ought to “sacrifice the weak” to the COVID-19 pandemic — seemed too outlandish to be believed. Readers engaged in the discussion with caveats that their comments applied only if the sign hadn’t been “photoshopped,” and “assuming it was real.”

In essence, the “sacrifice the weak, re-open TN” sign was seen by some as too cruel to be real, and possibly intended as a bombastic satirical commentary on movements to prematurely end social distancing measures:

2. I mean the dipshit with "Sacrifice the weak so TN can re-open" sign. If that's not photo-shopped, and actually real, it has to be astroturfing.
It's a rare combination of heartlessness, and total idiocy to openly convey that amoral state to the world. #COVIDIOTS

In the April 22 2020 tweet above, @PaulMBanks described the sign as “heartless” and “total idiocy to openly convey [an] amoral” position, suggesting the sign “has to be astroturfing.” In that context, “astroturfing” is concealing the origin of an effort or movement “make it appear as though it originates from and is supported by grassroots participants”; efforts to satirize the protests (which were themselves astroturfed) seemed more likely.

Mentions of the sign were frequent on social platforms, and reactions ranged from anger to dismay:

A hundred bucks says that the guy in Nashville with the "Sacrifice the Weak" sign is also an ardent opponent of abortion.

this is what we’ve become

a world willing to “sacrifice the weak”

Lord, have mercy on us all pic.twitter.com/QLVfWH7DMB

‘Sacrifice the weak’ and ‘Give me liberty’: Signs at coronavirus protests across US https://t.co/mh3uadcTqK

Although some readers and viewers were skeptical that the “sacrifice the weak” sign was real, an April 20 2020 WZTV Nashville article featured video of the same masked protester holding the widely-shared sign: 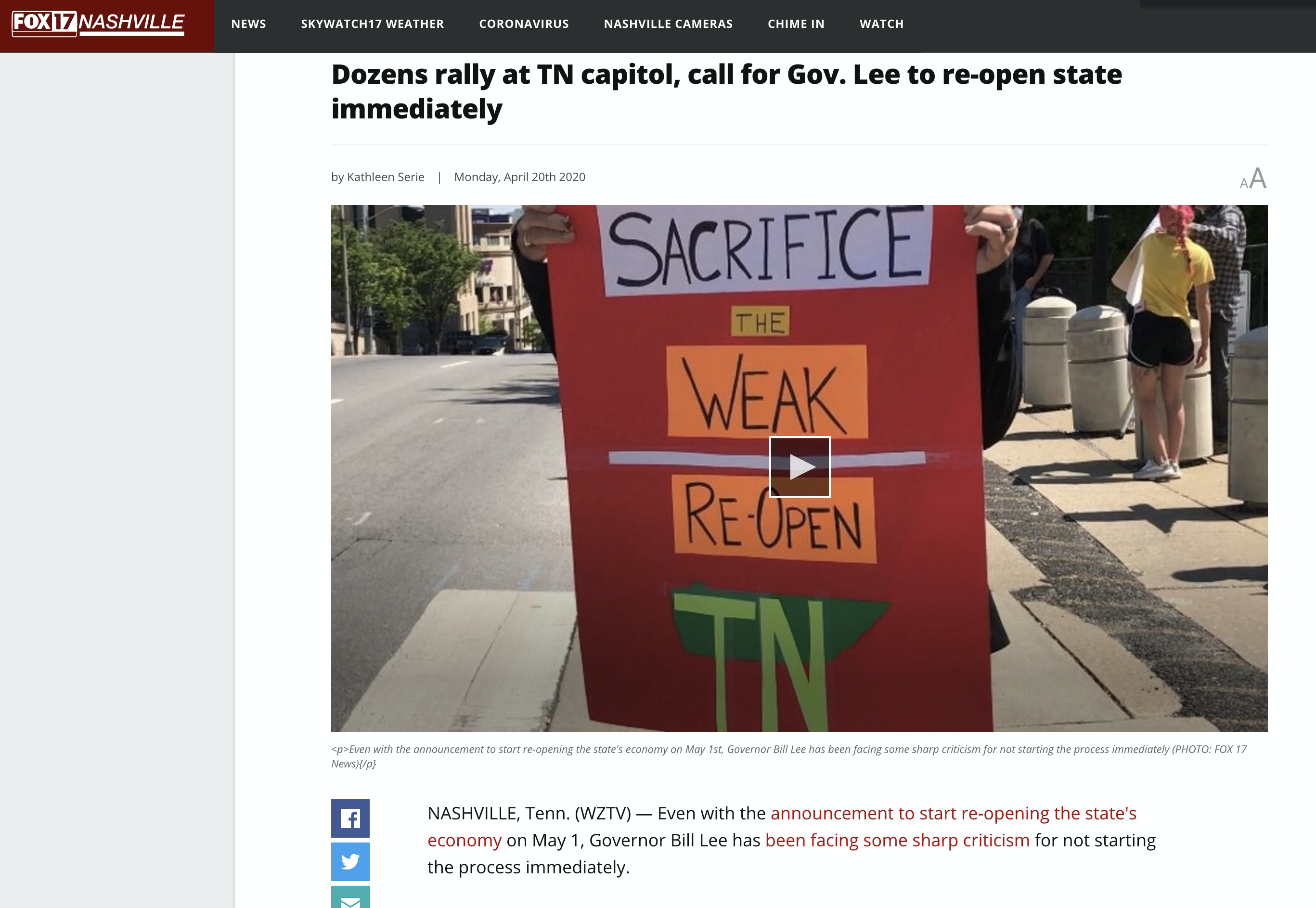 Although users suspected the “sacrifice the weak … re-open TN” sign was satirical, photoshopped, or “astroturfing,” the sign itself was genuine and unaltered. Images of the sign appeared in an April 20 2020 Nashville-area news organization’s video and reporting of a protest against lockdowns used as an attempt to slow the spread of coronavirus strain COVID-19. It is possible that the sign was intended as satire, but it is also implausible that anyone not in favor of ending the lockdowns would risk exposing themselves to COVID-19 simply to make a political joke.