"Japan made all of the medals for the 2021 Tokyo olympics out of discarded smartphones and laptops." 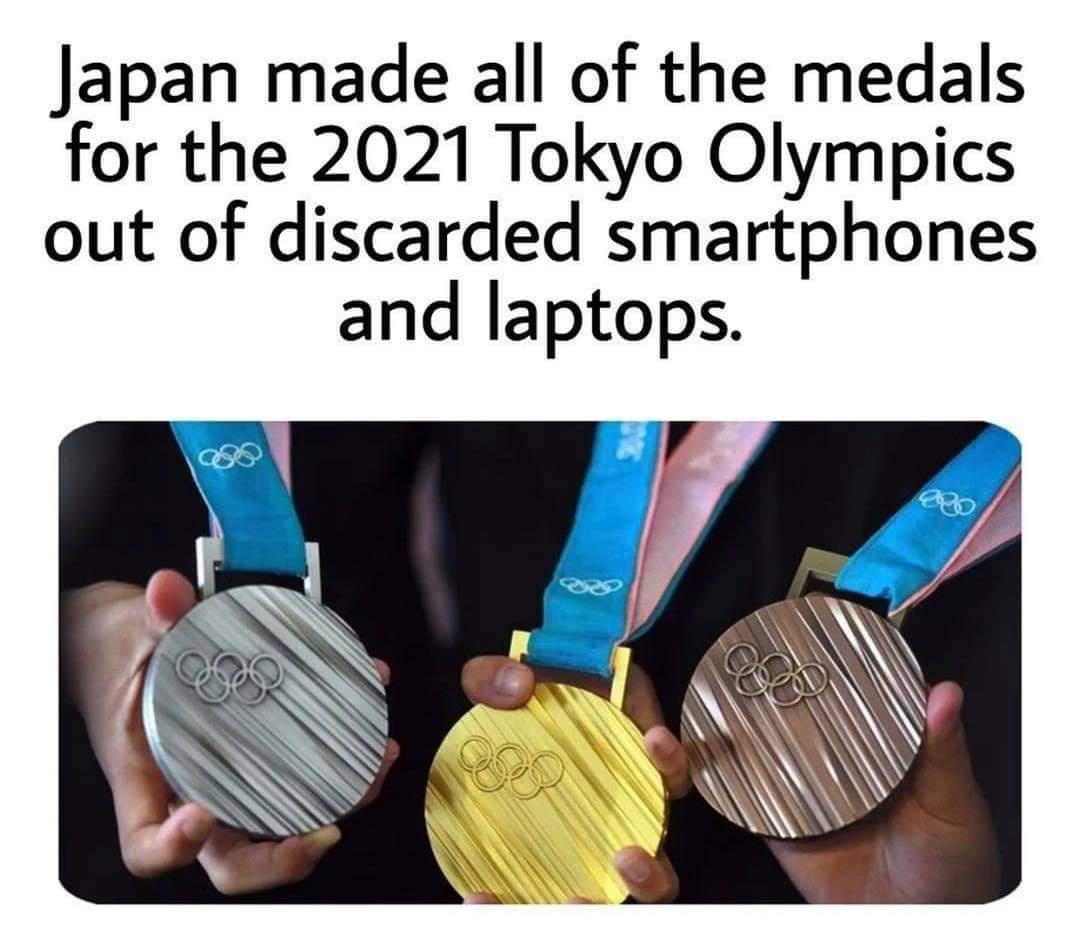 Titled “Congrats on winning, here is some e-waste,” text above an image of silver, gold, and bronze medals read:

Japan made all of the medals for the 2021 Tokyo olympics out of discarded smartphones and laptops.

The same image was popular on the subreddit r/Damnthatsinteresting, where it was shared on July 31 2021:

Free phones for winning the Olympics I guess from Damnthatsinteresting

However, a reverse image search showed that the attached photograph of textured Olympic medals was first shared well before 2021 — no later than September 2018. We located the same image in a February 2018 article published by an Estonian news source, and a translated caption read as follows:

The PyeongChang 2018 Olympic medals are displayed by young South Korean athletes during their unveiling at a ceremony in Seoul on September 21, 2017. T/ AFP PHOTO / JUNG Yeon-Je

A 2018 Telegraph article described the image similarly. A Forbes contributor blog post from September 2017 also featured the same image, which identified the medals as Korean:

The PyeongChang 2018 Olympic medals during their unveiling at a ceremony in Seoul on Sept. 21. (Photo by JUNG YEON-JE/AFP/Getty Images)

Although the image was misrepresented, the claim was not unsupported. An undated post on Olympics.com, “Tokyo 2020 Medal Project: Towards an Innovative Future for All,” explained:

The collection of small electronic devices for the Tokyo 2020 Medal Project closed on Sunday 31 March 2019. The medal design was announced in the summer of 2019.

In the two years between April 2017 and March 2019, 100 percent of the metals required to manufacture the approximately 5,000 gold, silver and bronze medals were extracted from small electronic devices contributed by people from all over Japan. Every single medal to be awarded to athletes during the Tokyo 2020 Games is made from recycled metals. We are grateful for everyone’s cooperation on this project. We hope that our project of recycling small consumer electronics and our efforts to contribute to an environmentally-friendly and sustainable society will form part of the legacy of the Tokyo 2020 Games.

On August 2 2021, Popular Mechanics‘ “Tokyo’s Olympic Medals Are Made Entirely From Recycled Gadgets” included a photograph of the actual Tokyo 2020 medals (which were not textured like the photo in the meme), and reported:

This year, the Tokyo Organizing Committee of the Olympic and Paralympic Games is in charge of presenting the gold, silver, and bronze medals—and they’re all made from recycled electronics. The Committee says it decided to create sustainable medals in an effort to build “an innovative future for all.”

Tokyo 2020 Medal Project officials shared that they hoped the results of the upcycling would create a lasting legacy and “contribute to an environmentally friendly and sustainable society.”

The process has been in the works since early 2017, when Japan announced it would collect old electronics and repurpose them into medals. Since then, the organizing committee has gathered over 47,000 tons of tech waste and more than five million cell phones in an effort to make the Games more sustainable.

A meme claimed “Japan made all of the medals for the 2021 Tokyo olympics out of discarded smartphones and laptops,” alongside a photograph of textured medals in silver, gold, and bronze. Although the image was unrelated and dated back to 2017, it was accurate that the Tokyo 2020 Medal Project “upcycled” discarded phones and laptops to create Olympic medals. Images of the medals forged from “old electronics” appeared in news articles in August 2021.