A public safety video released by the San Diego County Sheriff’s Department in California was quickly called into question online — but not by local news organizations, some of which shared it without mentioning that medical groups have described its central premise as misinformation.

The pre-produced video, released on August 5 2021, depicts what the department has called a “fentanyl overdose,” suffered by Deputy David Faiivae a month earlier while on duty. The department claims that Faiivae came into contact with fentanyl — a substance reportedly more potent than heroine or morphine — while on duty and overdosed. Undersheriff Kelly Martinez credits Faiivae’s training officer, Cpl. Scott Crane, with saving his life.

The San Diego Union-Tribune‘s description of the video reads in part:

“Just breathe, buddy, breathe,” Crane tells Faiivae, according to the video. When he asks his trainee if he is OK, Faiivae replies in a weak voice: “I’m sorry.”

Faiivae’s overdose happened around 4 p.m. in a parking lot in northern San Diego County during his first radio call of the day. The deputy works patrol out of the San Marcos sheriff’s station. It was his final day of shadowing the veteran Crane, officials said.

Sheriff’s officials are not sure if the fentanyl got onto the deputy’s skin or if he inhaled it.

Besides being published in the San Diego Union-Tribune (and re-published in its sister publication, the Los Angeles Times), the department’s video was spread through television news affiliates. But the department’s central claim — that touching or inhaling fentanyl can induce an overdose — has been challenged several times over.

Although the National Institute for Occupational Safety and Health — part of the Centers for Disease Control — has said that fentanyl “can be absorbed into the body via inhalation, oral exposure or ingestion, or skin contact,” and ingesting the substance can be fatal, other experts have for years argued that the chances of overdose by absorption or inhalation are so low as to be nearly negligible.

“If you could absorb drugs by touching them, why would people bother to inject them?” medical toxicologist Dr. Andrew Stolbach told the Detroit Free Press in 2018. “Drugs like fentanyl and analogs of fentanyl aren’t absorbed through the skin very well at all. So brief, incidental contact isn’t going to cause somebody to absorb a therapeutic dose, let alone a toxic dose.”

That same year, the American Medical Association approved a resolution geared toward developing more materials to combat disinformation around fentanyl that specifically criticizes “multiple media reports of police officers and firefighters falling ill, reportedly due to brief dermal exposure to an unknown white substance, which often leads to symptoms of panic and self-administration of intranasal naloxone, has misrepresented the science behind fentanyl while increasing paranoia among the lay public.”

Fentanyl and its analogs are potent opioid receptor agonists, but the risk of clinically significant exposure to emergency responders is extremely low. To date, we have not seen reports of emergency responders developing signs or symptoms consistent with opioid toxicity from incidental contact with opioids. Incidental dermal absorption is unlikely to cause opioid toxicity. For routine handling of drug, nitrile gloves provide sufficient dermal protection.

Changing The Narrative, an initiative involving both journalists and researchers based out of Northeastern University, published a separate analysis highlighting stories that resemble the one put out by the sheriff’s department:

There have been numerous unconfirmed reports of first responders (mainly police officers) “overdosing” at the scenes of drug busts and routine traffic stops. After minor contact with unknown powdered substances, such as brushing some powder off a uniform, the officer exhibits symptoms such as fainting and shortness of breath.

Nearby officers then administer doses of naloxone. “Saved by naloxone,” the officer eventually wakes up.

Other news reports suggest that officers are exposed to illicit fentanyl “dust particles” via inhalation. In a confined room where drugs had been stored, officers report feeling dizzy and disoriented upon entering the room. Reports speculate that illicit fentanyl has become concentrated in the air. Officers are then administered naloxone. 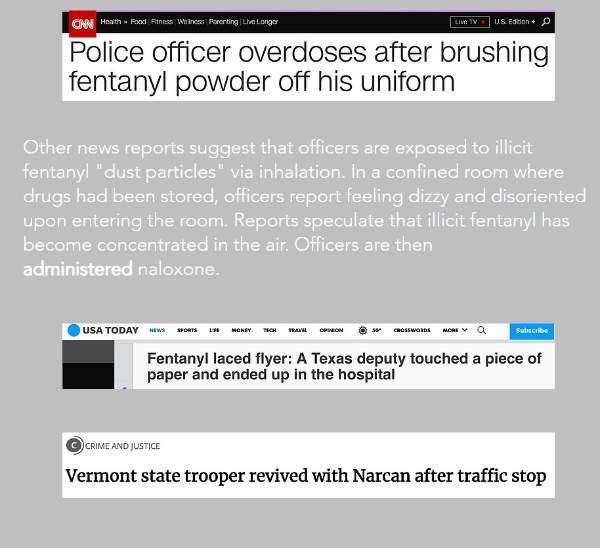 “What’s your background in physiology/medicine/pharmacology/chemistry?” he asked the department on Twitter. “[Because] this is not physically possible, and has never (never!) occurred. And it didn’t happen this time either. You should be ashamed of yourself for spreading easily disprovable lies.”

The sheriff’s department did not respond to our request for comment on the medical evidence against their claim in the video. Dana Littlefield, public safety editor for the Union-Tribune, told us via email:

The reporters worked hard on this story yesterday and are confident in their reporting, as am I. However, we do understand that were are questions about whether a person can overdose on fentanyl if it is absorbed through the skin so we are following up on this issue. The story does note that it’s unclear whether fentanyl got onto the deputy’s skin or if he inhaled it, but I take your point that there’s much more to be said here. We are asking questions and following up.

We also asked the Los Angeles Times why it reproduced the Tribune’s piece. That newspaper did not respond. We also contacted the San Diego County Medical Examiner’s office seeking any toxicology reports which may address the sheriff department’s claims; they apologized, told us they only handle fatal overdoses, and advised us to contact the sheriff’s department. (We received no reply.)

In a notable example of fentanyl-related disinformation, in April 2021 medical experts debunked the idea that George Floyd had a lethal amount of the substance in his system when he was killed by Minneapolis police officer Derek Chauvin in May 2020.

“Mr. Floyd died from a low level of oxygen, and this caused damage to his brain that we see. And it also caused a PEA [pulseless electrical activity] arrhythmia that caused his heart to stop,” Dr. Martin Tobin of Loyola University Medical Center testified at Chauvin’s trial. Chauvin was convicted of murdering Floyd, and sentenced in June 2021 to 22 1/2 years in prison.