Manufactured controversy about millennial affectations have nearly become a tradition all their own, and in 2018, news outlets took a shine to claims that “social justice warriors” (often shortened in internet parlance to the more derogatory “SJWs”) were “demanding” a gender-neutral Santa.

Various versions of this story featured vague details about from where people might be insisting upon a gender neutral Santa. On December 14, 2018, a Texas AM talk radio host complained:

Many critics (limp wristed SJWs) of Santa Claus are asking if he should become gender-neutral.

These are the same morons who get offended when someone plays 74 year old version “Baby it’s cold outside” and suggest it’s a song about date rape.

The issue arose when a logo design company was asked to update old St. Nick’s image.

Folks, Saint Nick is a man. Get over it.

Insistence that a fictional character hews to any particular ethnicity or gender is reminiscent of former Fox News anchor Megyn Kelly’s certainty in 2013 that Santa Claus (not to mention Jesus Christ) were white men. By the time Daily Wire got ahold of the story, “a majority” of people were seeking a change to Santa’s gender:

A majority of Brits and Americans want a “modern update” to Santa Claus, according to a survey conducted by logo-making company, GraphicSprings, and they’re even open to a “gender-neutral” St. Nick — even if that flies in the face of tradition.

Fox News reports that GraphicSprings surveyed more than 800 “people across the U.S. and U.K, asking them how they would ‘rebrand’ or modernize the jolly fellow,” and they had some….interesting…ideas about how to bring Santa Claus into the 21st century.

It is not easy to locate the actual source of the widely-repeated claim that the people were clamoring for a gender-neutral Santa Claus. Circulating articles made it sound as if the idea was some sort of widespread call to action (it was not):

These findings continue the attack on Christmas cheer this season: classic Christmas movie, “Rudolph the Red Nosed Reindeer” was labeled problematic and the song “Baby It’s Cold Outside” was discontinued on many radio stations after #MeToo backlash.

… No longer is the debate just about whether it is politically correct or not to say ‘Happy Holidays’ versus ‘Merry Christmas’. Today’s social justice warriors demand that Santa meet PC standards.

The few more detailed assessments of the claim indicated that was not the case. The Blaze’s “Survey shows nearly one-third of respondents want to change Santa Claus’ gender” referenced a purported survey carried out not by a public research firm, but “conducted by a graphic design group.”

The recent survey conducted by a graphic design group found that 17.2 percent of those polled would prefer the jolly old elf to be gender neutral and more than 10.6 percent said he should be a woman.

Four hundred people between the ages of 18 and 65 were first asked for suggestions on how Santa should be rebranded. Then the company asked 4,000 people across the U.S and the United Kingdom to vote on the suggestions.

Twenty-one percent voted for Santa to drop some weight and 20 percent would like to see him sporting some tattoos.

We should point out here that even the most flexible retelling does not involve anyone “demanding” Santa be portrayed as gender neutral. If the survey was accurately relayed, 69 people in the world suggested that if Santa was rebranded, that a change of gender could be a creative take.

But as is the case with most “surveys” that go on to become virally popular, we know little about its protocols. Perhaps the most interesting aspect is that when it came down to the little we do know, those proposing a change of gender for Santa were specifically asked how they would “rebrand” the character.

A graphic added to some iterations didn’t even include the gender-swap aspect of the survey. In fact, other updates like a flying car, skinny jeans, or a hoverboard ranked more highly in the survey: 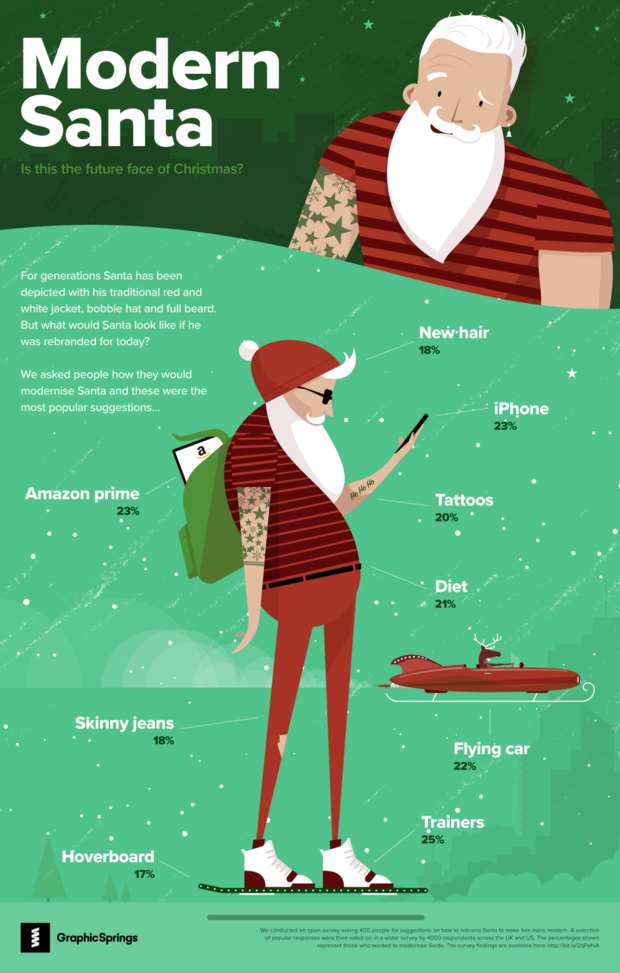 As far as we can tell, the graphic design firm (GraphicSpring) did not even publish a blog post about its findings. All links we found in items railing against millennials for emasculating Santa led to a public Google spreadsheet.

In it, GraphicSprings indicated that respondents ranged from 18 to 65 (not “millennials.”) Additionally, no one was demanding a change to Santa’s gender, according to the people who conducted the survey:

Suggestions on how to change Santa were gathered from an open survey of 400 respondents from both the UK and US.

A selection of these suggestions were then voted on by over 4000 people across the UK and US, with the most popular visualised in our graphic.

As it turns out, the firm did a blog about its survey, and it looked as if most outlets eschewed their official post, “Modern Santa.” That might be because it didn’t even make mention of the “gender neutral” aspect dominating subsequent headlines:

We all imagine Santa as the bearded old man in his iconic white and red suit, black belt, matching boots and reindeer drawn sleigh. But what if Father Christmas was rebranded for today? We asked people how they would modernise Santa. Based on the results, we’ve updated Santa’s winter wardrobe and transformed his transportation. In it, he ditches his iconic suit and adopts some skinny jeans, trainers, and a hover-board to name just a few. Find out what other popular suggestions were voted on below…

We contacted GraphicSprings to learn more about their survey, but have not yet received a response.

Overall, a spate of headlines suggested that “social justice warriors” and millennials had begun demanding that Santa Claus be “gender neutral,” a claim that is almost entirely false. What actually occurred is that a graphic design firm polled a small number of people between the ages of 18 and 65 for suggestions on a Santa rebrand.

A third question asked whether a rebranded Santa should be male, female, or gender neutral. An actual majority of those answering (70.79 percent) said “male,” and the remaining percentage was divided between “female” and “gender neutral.” But those respondents were presented with a multiple choice question, and it appeared none of those polled dreamed up a “gender neutral” Santa, much less demanded one for Christmas.