Christmas was illegal in the United States until 1836.

Did the original “War on Christmas” start in the United States?

A Facebook page shared the following meme in December 2018: 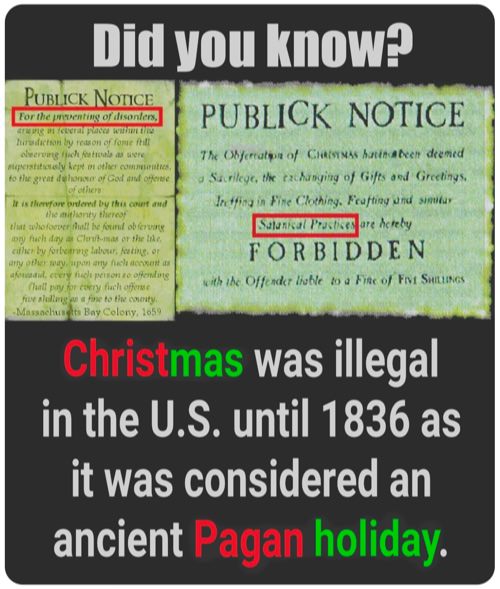 The text of the meme read:

Christmas was illegal in the U.S. until 1836 as it was considered an ancient Pagan holiday.

Interspersed with the text were images that appeared to be historical documents supporting the claim. However, no verifiable citations accompanied the post or meme.

As a “fun fact,” the claim was compelling — could Christmas as we know it be such a relatively modern invention? Were appeals to tradition with respect to Christmas made ignorant of a longer history wherein Christmas was an unwelcome intrusion on an otherwise boring winter season? (A 2012 Huffington Post UK piece went further, declaring that Christmas was illegal in the United States until 1907.)

The history of Christmas in the United States — as is the case with many American traditions — is deeply influenced by its many waves of immigration. Its popularity in the early United States seemed to link directly back in part to beliefs and traditions upheld in England:

In 1644 [Oliver Cromwell] enforced an Act of Parliament banning Christmas celebrations. Christmas was regarded by the Puritans as a wasteful festival that threatened core Christian beliefs. Consequently, all activities relating to Christmas, including attending mass, were forbidden. Not surprisingly, the ban was hugely unpopular and many people continued to celebrate Christmas secretly.

The Puritan War on Christmas lasted until 1660. Under the Commonwealth, mince pies, holly and other popular customs fell victim to the spirited Puritan attempt to eradicate every last remnant of merrymaking during the Christmas period … All shops and markets were to stay open throughout the 25th December and anyone caught holding or attending a special Christmas church service would suffer a penalty.

…Cromwell was Lord Protector until his death in 1658, whereby Charles II was enthusiastically welcomed back to England to take the throne as the country’s rightful heir … Once Charles II was restored to the throne, all legislation banning Christmas — enforced from 1642 to 1660 — was dropped and the common people were once again allowed to mark the Twelve Days of Christmas. Old traditions were revived with renewed enthusiasm and Christmas was celebrated throughout the country as both a religious and secular festival.

A date visible in the meme’s text referenced a colonial United States (the Massachusetts Bay Colony), and a year: 1659. If legitimate, that document or reproduction would land squarely in the period in which Puritanical beliefs quashed the celebration of Christmas in England during that time. The Massachusetts Bay Colony, later known as Boston, was established by Puritans who fled their native England to practice a stricter form of their religion in what later became the United States.

By the late 1600s, the Puritan way of life was already in decline, and Puritans geographically remained almost entirely in New England. Christmas fines there were highly localized and not typical, and general English customs were less and less common long before the government made Christmas a holiday:

The pilgrims, English separatists that came to America in 1620, were even more orthodox in their Puritan beliefs than Cromwell. As a result, Christmas was not a holiday in early America. From 1659 to 1681, the celebration of Christmas was actually outlawed in Boston. Anyone exhibiting the Christmas spirit was fined five shillings. By contrast, in the Jamestown settlement, Captain John Smith reported that Christmas was enjoyed by all and passed without incident.

After the American Revolution, English customs fell out of favor, including Christmas. In fact, Christmas wasn’t declared a federal holiday until June 26, 1870.

TIME magazine touched on the Puritans’ localized but strong distaste for Christmas merrymaking in an undated listicle:

From 1659 to 1681, showcasing one’s holiday spirit in Boston could cost you a fine of as much as five shillings. That’s right — Christmas used to be illegal. It’s somewhat surprising, then, that the same puritanical minds also created the first American batch of eggnog at Captain John Smith’s 1607 Jamestown settlement. (The word nog comes from the word grog; that is, any drink made with rum.) Christmas was so inconsequential in early America that after the Revolutionary War, Congress didn’t even bother taking the day off to celebrate the holiday, deciding instead to hold its first session on Christmas Day, 1789. It took almost a century for Congress to proclaim it a federal holiday.

As far back as the early 1700s, debate continued over the celebration of Christmas, showing that not all Americans abstained from holiday traditions:

Boston minister Cotton Mather preached to his congregation in 1712 about how “[T]he Feast of Christ’s Nativity is spent in Reveling, Dicing, Carding, Masking, and in all Licentious Liberty … by Mad Mirth, by long Eating, by hard Drinking, by lewd Gaming, by rude Reveling.” Around the same time, however, Anglican celebrations in the colonies “began to attract more Christmas-keepers, despite the scorn and hostile preaching of the Puritan-minded,” writes historian Gerry Bowler in his new book, Christmas in the Crosshairs.

This debate over how to celebrate Christmas would continue into the next century and wouldn’t be resolved until a group of writers, poets, and intellectuals—men like New-York Historical Society cofounder John Pintard and “A Visit from St. Nicholas” poet Clement Clarke Moore—helped to move the holiday’s celebration from the streets into the home. But the merits of celebrating the day of Christ’s birth would not be widely called into question in the U.S. again.

For Christmas to be finally legalized in 1836, it would have had to have been illegal across the colonies and then states — which it was not, or at least not for very long:

In the 1800s, Americans’ views on Christmas changed a great deal. One author, Washington Irving, wrote fictitious stories of how Christmas had been celebrated in England before the Puritans took over, and some of these stories caught on in American practices. German immigrants brought with them the practice of placing evergreen branches and trees in home during winter as a reminder of life during hard times. And, Catholic immigrants brought the tradition started by Saint Francis of keeping small nativity scenes in their homes. By the late 1800s, most Americans celebrated Christmas. In 1870, President Grant and Congress declared Christmas, the celebration of the birth of Jesus Christ, savior of the world, a national holiday.

So what happened in 1836 to inspire the meme’s claims? It’s widely repeated (although not firmly proved) that Alabama became the first state to officially declare Christmas a holiday:

The celebration of modern Christmas — with traditions of decorating trees, singing carols and giving gifts — has its roots in the South. In 1836, Alabama reportedly became the first to make Christmas a state holiday, according to the History Channel, followed by Louisiana and Arkansas in 1838.

As for the rule which originated in the Massachusetts Bay Colony affecting early Bostonians, it was repealed in more than 150 years earlier (and prior to the founding of the United States of America) in 1681 (not 1836). The state of Massachusetts followed the southern states’ lead in 1856, making Christmas a public holiday.

Like many history facts-based memes, the claim Christmas was illegal in the United States had a tiny grain of truth to it — but it muddled quite a bit of the truth and painted a misleading picture of the history of the holiday in America. Puritans, a small group of early Americans, imposed a fine for Christmas celebrators in the Massachusetts Bay Colony (a law repealed a century and a half earlier than the meme stated). States began declaring Christmas an official public holiday in 1836, and President Ulysses S. Grant declared it a federal holiday in 1870.