The word "hospital" is an acronym for "house of sick people including treatment and labour."

On December 17 2018, a Facebook page shared the following meme purporting to reveal the surprising etymology of the word “hospital”: 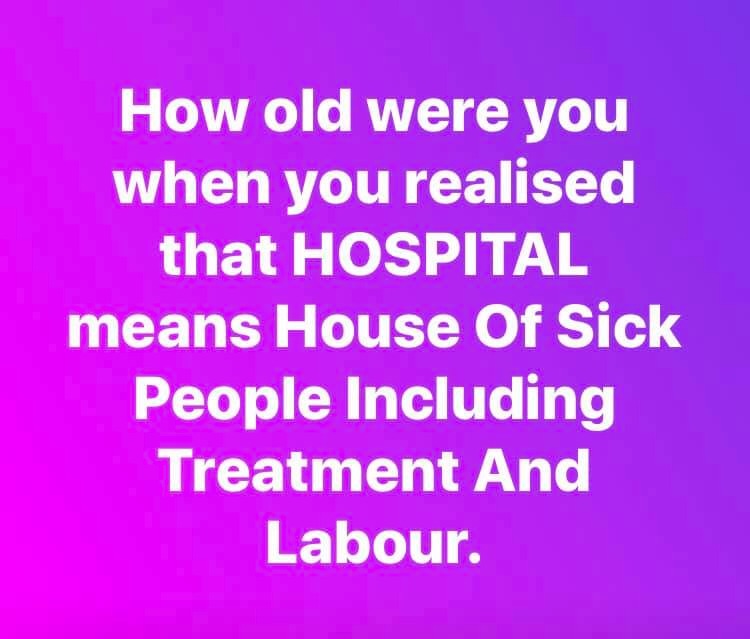 With a nod to the “today years old” meme, it read:

How old were you when you realised that HOSPITAL means House Of Sick People Including Treatment and Labour.

Fun (but often unreliable) assertions about the purported etymology of popular words are known movers and shakers on social media, often guaranteed to rake in likes, shares, and comment engagement. Frequently, the claims constituted a backronym, which is a back-formed word construction purporting to be a legitimate acronym. Although many are purely humorous in intent, others fall into the category of folk etymology or falsehoods.

While the word “hospital” was in wide use in 2016, social media discussions of its etymology made no mention of the “house of sick people” purported origin. As of December 18, 2018, the claim did not seem to exist anywhere across the internet before these Facebook posts.

The etymology of the word “hospital” and its relatives (hostel, hospice, and hotel among them) is strongly consistent across linguistic resources; Merriam-Webster took a deep dive into the origins of “hospital” in an undated blog post — and “house of sick people” was (unsurprisingly) not part of its etymology:

Worried parents of teens about to backpack through Europe will have no trouble believing hotel and hospital are actually etymologically connected. The English words hospital, hostel, hotel, and hospice are all etymologically related to the Latin noun hospes—a word having the diametric meanings “a guest or visitor” and “one who provides lodging or entertainment for a guest or visitor.” (Host meaning “one who entertains guests” is also related.) The words all passed through and were altered by French before entering English, which means they are doublets—or rather, words derived from the same source but having different meanings.

The formative source of hospital, hostel, and hotel is Latin hospitale, a word referring to a house or lodging for travelers that is a derivative of the adjective hospitalis (“of a guest,” “hospitable”), which developed from hospes. Hospital and hostel are direct borrowings of French words formed from hospitale, whereas hotel was influenced by French hostel … The oldest doublets are hospital and hostel. Hospital is a 14th-century loanword from Anglo-French that originally designated what we would now call a hostel—a place where weary travelers could rest before pressing on with their journey …

… Although the doublets hospital, hostel, hotel, and hospice traveled different routes into the English language, they share a Latin point of departure at hospes and made stops in French, where they gained their seminal English spellings and meanings. The English words are distinct in form, but they have retained a commonness in meaning after their travels: they all relate to providing for guests or visitors of one kind or other, a characteristic shared by their hospitable Latin parent, hospes.

Whether the “house of sick people including treatment and labour” claim for the etymology of “hospital” was intended as a joke or if people took it seriously is not expressly clear, but the actual origin of the word is not in dispute. It and related words have their roots in the Latin word hospitale, a dwelling for non-residents. Claims to the contrary involving the acronym above did not even circulate in rumor form measurably before December 2018.