On December 14 2018, documents released by the Department of Justice clocked the cost of Special Counsel Robert Mueller’s ongoing investigation into alleged Russian meddling in the 2016 election at over $25 million:

The Justice Department’s investigation into Russian election meddling and any ties to the Trump campaign has cost more than $25 million since it started in the spring of 2017, according to Justice Department documents released Friday.

Special counsel Robert Mueller’s office spent nearly $4.6 million to operate from April through the end of September, on top of $3.9 million in costs incurred by the DOJ and FBI connected to Mueller’s investigation. Previous documents the Justice Department released revealed costs of nearly $17 million related to the probe from May 2017 through March 2018.

Reporting on the cost of the investigation prompted recirculation of a meme suggesting that the investigation has actually been quite profitable, thanks to the seizures of large assets from connected individuals such as Paul Manafort: 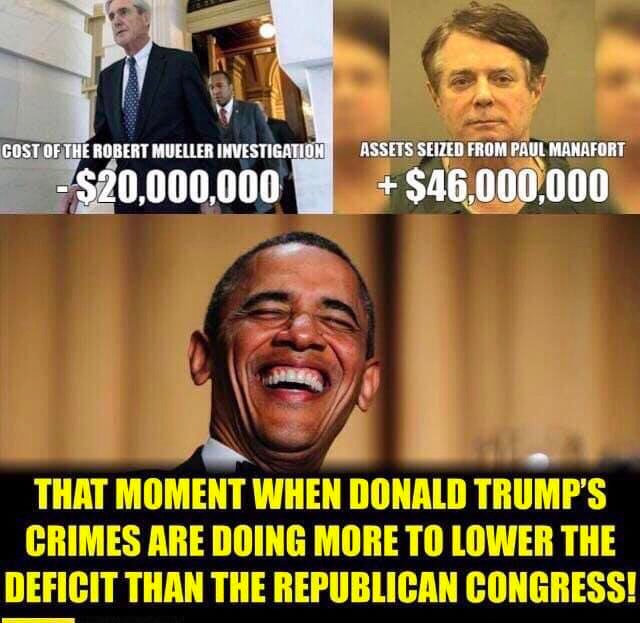 That moment when Donald Trump’s crimes are doing more to lower the deficit than Republican Congress!

The intent of the meme makers wasn’t immediately apparent, but it essentially made three claims: that Mueller’s investigation cost at least $20 million, that assets seized from Manafort totaled over $46 million, and that the investigation was thus profitable or presented a net positive to the federal budget.

Versions of this meme first appeared on or around mid-September 2018, and the December 2018 report linked above indicated that the $20 million figure was tied to a specific time. As of the latter report, roughly $25 million had been spent on the investigation, making the first claim reasonably accurate.

The information in the meme may have originated with a September 14, 2018 observation by journalist Marcy Wheeler:

Mueller’s office just released a superseding complaint as part of a plea deal with Paul Manafort. He will plead guilty to ConFraudUs tied to his FARA violations and obstruction tied to his witness tampering. The Special Counsel’s office promises “additional information … in the near future.” I guess we’ll learn then whether this involves cooperation (for all we know, Manafort is sitting in front of the grand jury right now).

While Manafort will get off without many new charges in the DC case, he’ll lose his (ostrich skin) shirt.

This adds both the Federal Savings Bank account listed for forfeiture in the EDVA case, and the Capital One case. And these are subject to both civil and criminal forfeiture, so Trump can’t pardon them away.

Update: On Twitter, several people note that with this forfeiture, the Mueller investigation just more than paid for itself.

That question involved the general fate of assets seized in the course of an investigation, and how those assets are handled and processed. The reality of seized assets was a bit more complex, however. In August 2018, a Huffington Post article explained:

What would happen afterward is that the government will check if there are any third parties, such as banks or relatives, who have a stake in his properties. If not, the government will liquidate these assets through public auctions often run by the U.S. Marshals Service that can take place within months or even weeks of the court issuing a sentence of criminal forfeiture. The proceeds from these auctions then go to any victims of the crimes, or if there are none who qualify, into a general fund for federal law enforcement agencies.

The New York Times later reported that the assets will end up “in the Justice Department’s Asset Forfeiture Fund, which is used to cover costs related to law enforcement,” referencing a page on the Department of Justice’s website detailing the use of seized assets:

The Attorney General is authorized to use the Assets Forfeiture Fund to pay any necessary expenses associated with forfeiture operations such as property seizure, detention, management, forfeiture, and disposal. The Fund may also be used to finance certain general investigative expenses. These authorized uses are enumerated in 28 U.S.C. §524(c).

The Federal Bureau of Investigation’s page on asset forfeiture notes that seized funds are used to “help protect and serve our communities and support law enforcement.”

It is broadly accurate to say that as of December 2018, the Mueller investigation’s asset seizures totaled more than its cost. It wasn’t clear whether anyone’s intent was to suggest that the two numbers cited in any way influenced one another. However, suggestions that it “paid for itself” appeared to be of a purely illustrative nature.