In 2018, Jacob Wohl and Jack Posobiec tweeted about impeaching President Obama (who had since left office). 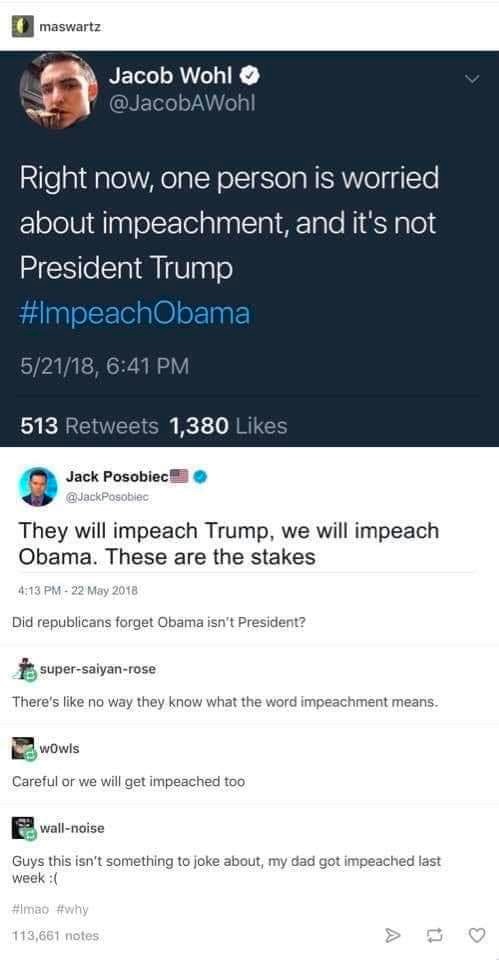 The image looked like a screengrab from Tumblr page in which the two purported May 2018 tweets from Posobiec and Wohl appeared alongside commentary from social media users:

Right now, one person is worried about impeachment, and it’s not President Trump #ImpeachObama

Beneath those images, four users commented sarcastically about the tweets’ understanding of the process of impeachment:

There’s like no way they know what the word impeachment means.

Careful or we will get impeached too

Guys this isn’t something to joke about, my dad got impeached last week 🙁

The implied humor in the post depended on the idea that one cannot be impeached after leaving office, or perhaps that impeachment itself is the act of removing a sitting elected official from their position.

Neither is the case. Although the concept of impeaching a former official is atypical, it’s not completely unheard of. In 2001, Slate published a piece about whether former President Bill Clinton could be impeached despite having left office:

Sen. Arlen Specter, R-Pa., has suggested that Bill Clinton, though now out of office, could be impeached for his pardon of fugitive Marc Rich (although probably not for grabbing a couple of coffee tables). Can a former president be impeached?

Apparently, yes. Obviously a former president would not be subject to removal from office, but scholars say that Article I, Section 3 of the Constitution, which says that impeachment may result in “disqualification to hold and enjoy any Office of honor, Trust or Profit under the United States,” could apply … It is less clear whether a conviction could mean the removal of his pension, government-funded office, and other perks.

The article put forth the notion that there might even have been precedent for such an action:

Although impeaching a former president would be a first, there is some scant precedent for impeaching someone already removed from office. In 1797, Sen. William Blount of Tennessee was charged with treason for a scheme to help the British take land from Florida controlled by the Spanish … The Senate decided to go ahead with its impeachment trial although in the end it acquitted Blount because he was no longer in office. William Belknap, secretary of war under Ulysses Grant, was impeached by the House on bribery charges and resigned from office. Though the Senate went ahead with his trial, he, too, was acquitted because he was no longer in office.

Whether or not the tweets analyzed the concept that deeply can only be a matter of speculation, as without any proof, intent is always difficult to discern.

Nevertheless, the tweets are real. Jacob Wohl’s impeachment tweet was posted on May 21 2018, and Jack Posobiec’s impeachment “stakes” tweet appeared the very next day.