Celebrity astrophysicist Neil DeGrasse Tyson said an asteroid could hit the planet in 2020.

On October 18 2020, the New York Post published an article with the anxiety-inducing headline, “Neil deGrasse Tyson warns asteroid could hit Earth day before election,” which revived interest in a previously viral rumor of the same description.

That’s one way to rock the vote.

An asteroid with a diameter the size of a refrigerator could strike the Earth the day before the November election, according to celebrity scientist Neil deGrasse Tyson …

It was patently clear that the site was angling for clicks and shares based on headline alone, a circumstance reflected in aggregated content about the same claim:

In all the above posts, Tyson was quoted as saying that an asteroid “could hit Earth,” typically before election day, or November 3 2020. No post or headline clarified what the story said next, which was this:

… but it’s not large enough to do any serious damage.

Asteroid 2018VP1, a refrigerator-sized space-rock, is hurtling towards us at more than 40,000 km/hr.

It may buzz-cut Earth on Nov 2, the day before the Presidential Election.

It’s not big enough to cause harm. So if the World ends in 2020, it won’t be the fault of the Universe. pic.twitter.com/eiy9G9w4Ez

But it’s not big enough to cause harm. So if the World ends in 2020, it won’t be the fault of the Universe.

If the claim looked familiar, it was likely because clickbait sites and tabloids had been squeezing this exact same story relentlessly for months, causing it to intermittently trend across social media as “new news.” In August 2020, NASA’s @AsteroidWatch explicitly said that the asteroid posed no threat to the planet:

Asteroid 2018VP1 is very small, approx. 6.5 feet, and poses no threat to Earth! It currently has a 0.41% chance of entering our planet’s atmosphere, but if it did, it would disintegrate due to its extremely small size.

The “asteroid could hit Earth” nonsense wasn’t even the paper’s first attempt to leverage the “2020 is bad” meme in separate clickbait, such as a misleading and very old claim about parallel universes “discovered” in Antarctica:

In May 2020, Did Scientists Find Evidence of a Parallel Universe Where Time Runs Backwards?

That earlier claim, again also nonsense, featured a headline optimized for social media and almost no credible information in the article itself: 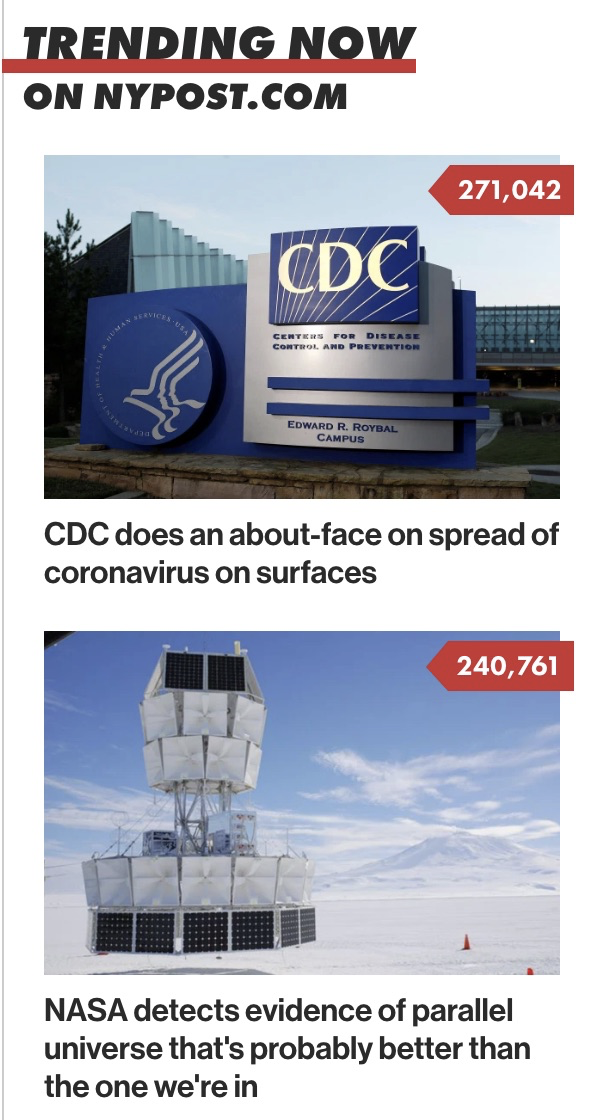 In the second of two images above, a headline read: “NASA detects evidence of parallel universe that’s probably better than the one we’re in.” The New York Post‘s story about an asteroid hitting Earth before election day was a clear re-tread of the generalized sentiment that 2020 was an unpleasantly busy year for residents of this particular planet.

To sum up, a headline loudly trumpeting that “Neil deGrasse Tyson warns asteroid could hit Earth day before election,” was designed for social media sharing. It was sourced entirely from Tyson’s posts above, in which he explicitly said Asteroid 2018VP1 was “not big enough to cause harm”; NASA previously stated it posed “no threat to Earth.” The headline was clearly misleading, as it completely elided the spirit of Tyson’s posts — that Asteroid 2018VP1 was not going to cause any damage to Earth.