"Ok... just found something kind of interesting while reading the original script for The Addams Family (1991)... anyone ever see this?"

On October 16 2020 a Facebook user shared the following Twitter screenshot which purportedly depicted a “writer’s note” on the original script for the 1991 film The Addams Family: 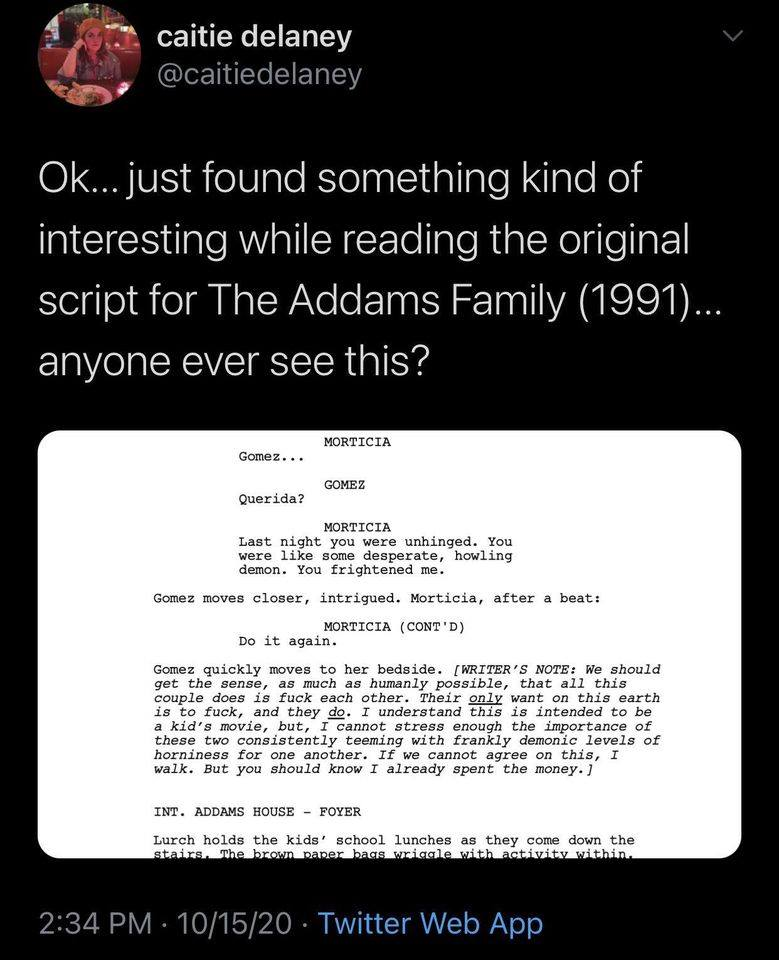 The following dialogue appeared in an image attached to the tweet, likely recognizable to any fans of the 1991 Addams Family film:

MORTICIA
Gomez, last night – you were unhinged. You were like some desperate, howling demon. You frightened me.

MORTICIA, (CONT’D)
Do it again.

Gomez quickly moves to her bedside. [WRITER’S NOTE: We should get the sense, as much as humanly possible, that all this couple does is fuck each other. Their only want on this earth is to fuck, and they do. I understand this is intended to be a kid’s movie, but, I cannot stress enough the importance of these two consistently teeming with frankly demonic levels of horniness for one another. If we cannot agree on this, I walk. But you should know I already spent the money.]

Lurch holds the kids’ school lunches as they come down the stairs. The brown paper bags wriggle with activity within.

A YouTube clip provides a longer version of the scene, with some preceding dialogue between Gomez and Morticia. At 0:55 in the video, the exchange above occurs. Commenters apparently spotted the screenshot above on Instagram, too, as at least one person referenced it:

An October 19 2020 post to Reddit’s r/MovieDetails also discussed the circulating screenshot — but we found no reference to the Addams Family (1991) “writer’s note” appearing before mid-October 2020:

In "the addams family" (1991) the writers notes hint at some very adult content even though it is meant to be a children’s film and wanted both Gomez and Morticia to keep the same energy throughout the film. from MovieDetails

The tweet circulating as a screenshot on Twitter and apparently Instagram was difficult to find. Links back to it led to an error page, and it was not available in any archives we searched.

However, we did manage to pull up a version of it on Google’s cache, a copy that would not be viewable for long after the tweet was deleted. The original tweet was shared by @caitiedelaney on October 15 2020, and in addition to the screenshot, they wrote:

Ok… just found something kind of interesting while reading the original script for The Addams Family (1991)… anyone ever see this?

We archived the cached copy, and that saved version revealed both why the tweet was deleted and the origin of the purported “writer’s note” on the 1991 Addams Family script: 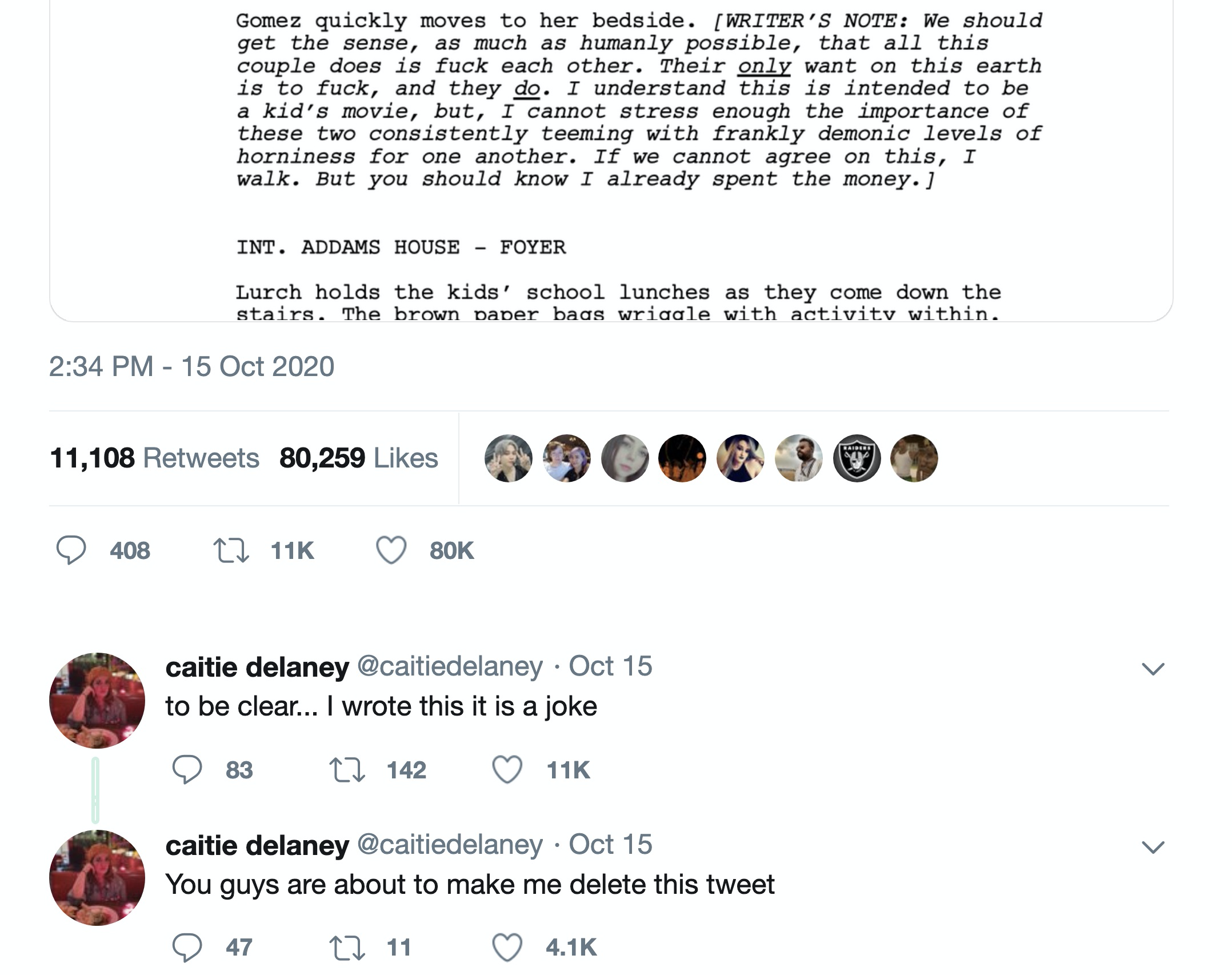 Delaney published the tweet on October 15 2020, and directly under it in the replies, they wrote:

to be clear… I wrote this it is a joke

You guys are about to make me delete this tweet

Although the “writer’s note” wasn’t real, it clearly resonated with fans of the film, as well as admirers of the chemistry brought to the screen by Anjelica Huston (Morticia) and Raul Julia (Gomez). Had the contents of the note and the “demonic levels of horniness” not been widely observed, the joke would unlikely have been mistaken as possibly authentic.

Delaney’s tweet about the 1991 Addams Family script containing a note indicating that moviegoers “should get the sense, as much as humanly possible, that all this couple [Morticia and Gomez] does is fuck each other” was wildly popular across social networks, and drove interest in both the scene in question and the script itself. Delaney eventually deleted the tweet, likely due to social media’s refusal to treat it as a joke.