An image shows a letter from then-Senator Joe Biden to a Delaware widow named Ruth Cooke.

On October 15 2020, a Facebook user shared a purported letter dated February 19 2002 that was attributed to Joe Biden and addressed to a widow named Ruth Cooke: 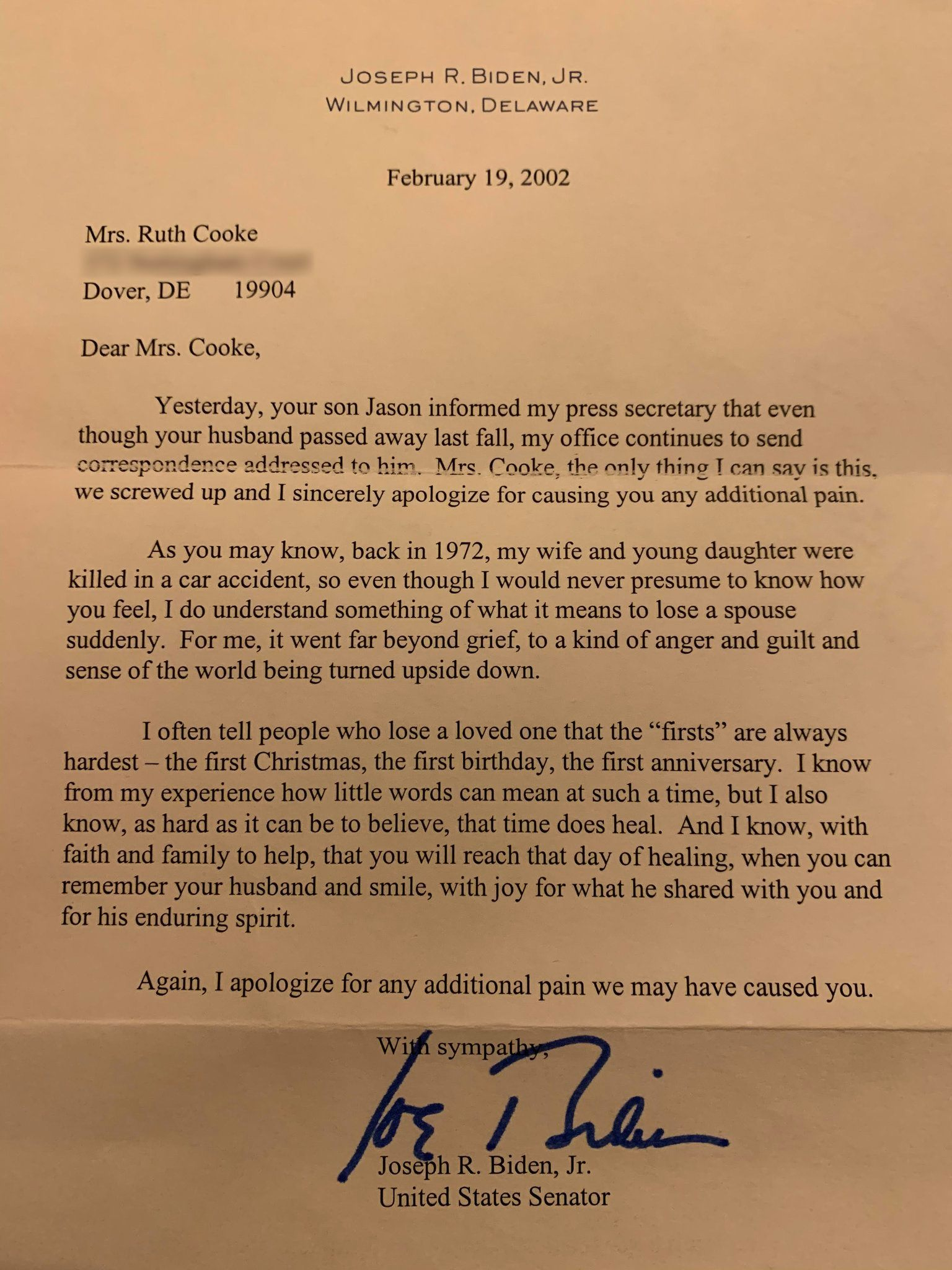 On October 16 2020, the letter was referenced in a post to Reddit’s r/politics:

Text of the Letter

Yesterday, your son Jason informed my press secretary that even though your husband passed away last fall, my office continues to send correspondence addressed to him. Mrs. Cooke, the only thing I can say is we screwed up and I sincerely apologize for causing you any additional pain.

As you may know, back in 1972, my wife and younger daughter were killed in a car accident, so even though I would never presume to know how you feel, I understand something of what it means to lose a spouse suddenly. For me, it went far beyond grief, to a kind of anger and guilt and sense of the world being turned upside down.

I often tell people who lose a loved one that the “firsts” are always the hardest — the first Christmas, the first birthday, the first anniversary. I know from my experience how little words can mean at such a time, but I know, as hard as it can be to believe, that time does heal. And I know, with faith and family to help, that you will reach that day of healing, when you can remember your husband and smile, with joy for what he shared with you and for his enduring spirit.

Again, I apologize for any additional pain we may have caused you.

Context of the Letter

The matter addressed in Biden’s letter to Cooke is one with which any person who has lost a loved one has likely encountered. Not only is it nearly impossible to cease receiving letters addressed to a deceased loved one, appearance of such mail can serve as a painful and constant reminder that the person is no longer alive. The letter became popular in part because it appeared that Biden went beyond the expected outcome — stopping mail to the deceased man — to personally express regret and sympathy, and he went on to share his own experience with the loss of a spouse and child.

Biden was widowed at a young age, as explained in an August 2019 Associated Press profile:

WASHINGTON (AP) — On the night before Joe Biden’s world collapsed, he sat in a picture-perfect scene with his wife by the fireside in their Delaware living room.

Biden, the hotshot senator-elect at just 30, was reflecting on the big things he would do when he got to Washington. It was one week [before] Christmas in 1972, and Neilia [Biden], also 30, was addressing holiday cards as her husband rambled on. But then she interrupted his musings to share an ill premonition.

“What’s going to happen, Joey?” she asked her husband, in Biden’s later recounting. “Things are too good.”

One day later, Neilia and the couple’s 13-month old daughter, Naomi, were dead. Sons Hunter and Beau, a year and a day apart at 3 and 4, were seriously injured.

The article went on to note that son Beau Biden also died at a relatively young age:

As it turned out, Biden’s passage through hardship was not to be a one-time journey but a well-traveled path. His life was later rocked by serious illness, political setbacks, and, in 2015, Beau’s death from brain cancer at age 46. There were other, less public, trials, including Hunter’s struggles as an adult with addiction.

Biden’s letter accurately reflected his personal experience with widowerhood, although it largely focused on Cooke and her son’s request to Biden’s office.

Source for the Letter

Although the letter was almost two decades old at the time that it reappeared in 2020, it appeared to be a relatively new discovery.

Sorting through some of my mom’s things and came across this letter @JoeBiden wrote to her 18 years ago, after my dad passed. This is no form letter. This is heart and human connection. Thank you for reaching out to her, Mr. Vice President. #BidenHarris2020 pic.twitter.com/UyZvE6u6jJ

Cooke, who joined Twitter in 2008, explained that she found the letter among her mother’s saved possessions:

Sorting through some of my mom’s things and came across this letter @JoeBiden wrote to her 18 years ago, after my dad passed. This is no form letter. This is heart and human connection. Thank you for reaching out to her, Mr. Vice President. #BidenHarris2020

Although it was possible the letter was dictated, it appeared to be authentic and sourced from the daughter of its recipient. A reply to her post had a similar, but not identical, letter attached:

I have no idea how @JoeBiden knew that Elizabeth had passed away. Eli and @JamieJKang received this heartfelt sympathy letter. It makes me cry just rereading it. We are finally at the place where her memory brings a smile to our lips and not a tear to our eye. #BidenHarris2020 pic.twitter.com/eFi4mjtxOe

In fact, it appears that Biden has quietly sent countless condolence letters to the recently bereaved over the years.

According to Ruth Cooke’s daughter Catherine, Joe Biden wrote the letter transcribed above to her mother in February 2002. In the letter, Biden acknowledged learning that his office had sent mail to her late husband, apologized for the error, and shared his own experience losing a spouse and child in 1972. None of the letter focused on Biden’s office or political ambitions or asked for support, and he simply addressed the enormity of her loss and offered his condolences — and it is part of a years-long and well-documented pattern of similar correspondence over the years.