Dr. Deborah Birx said at a press conference concerning testing for COVID-19 that "At $50 a test, it wasn’t enough to hire another technician to run the machine full-time. So at $100 a test, it is."

A quote from the White House Coronavirus Response Coordinator about its response to the COVID-19 pandemic has begun circulating online among social media users criticizing it for its implications regarding for-profit healthcare.

The quote has been used for a graphic showing Dr. Deborah Birx alongside United States President Donald Trump, with the caption stating:

During a COVID-19 press conference, Dr. Birx let it slip that the lack of testing is because it wasn’t profitable enough for private labs: 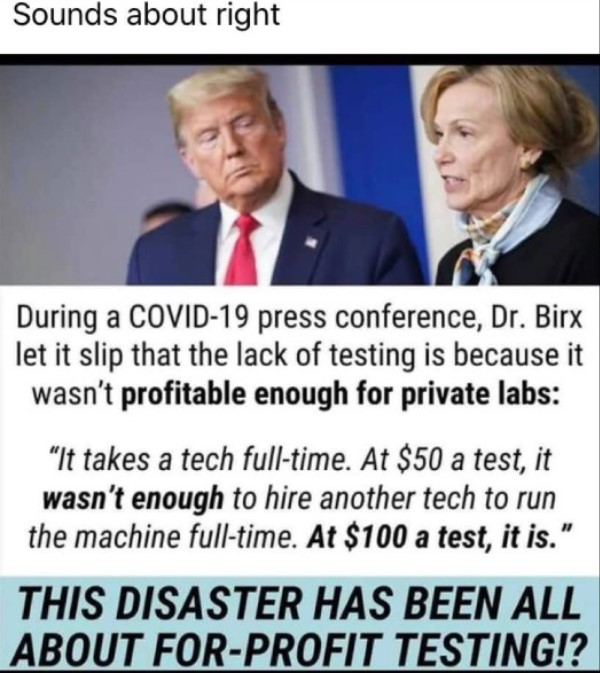 Birx’s remarks were taken from an April 16 2020 press conference she gave alongside Trump. She was responding to a question regarding the lack of available testing for states that might not meet “phase one” of the Trump administration’s alleged criteria for resuming business practices amid the outbreak.

According to the White House transcript of the press conference, the reporter asked “Truthfully, for those states that aren’t ready to go to phase one to get through these phases, do we have an idea of how many millions, tens of millions of tests they’re going to need for them to get through these phases? Any number out there? Of tests of any sort?”

You’ve heard me talk about tests for a while from the podium, and I think what has happened over the last several weeks is hospitals and clinics that could move to the more point-of-care tests move to those point-of-care tests. And what it’s left is an amazing array of capacity that exists in the country for at least a million more tests per week.

So we have a whole team working lab by lab to see what it would take to turn on all of those labs that aren’t running the pieces of equipment now. So you see in the system — I just said to you there’s a million more tests per week — that we have tests sitting there and equipment sitting there. And now we have to really deal with each single lab to really figure out what they need.

And I just want to thank Administrator Verma — Seema Verma — who went through with us, and thanks to the lab directors, they really explained to us: highly technical difficulty to run some of these big pieces of equipment. Because you have to allocate the samples, you have to centrifuge, you have to put them on the machine. It takes a tech full-time. At $50 a test, it wasn’t enough to hire another technician to run the machine full-time. So at $100 a test, it is.

So those are the kinds of changes we have to make bit by bit by bit. But that alone doubles our testing capacity per week.

So we’re committed to work with laboratories to answer every one of their issues with the state and local governments. And, I think, frankly, in every conversation I have — and the governors will say, “I need 5,000 people tested.” And I say, “Well, at the University of X, there are 6,700 tests waiting for you.” So it’s more of making sure that every governor and every public health official knows exactly where every lab is and where the tests are so we can create with them a real understanding so all these tests can be run.

So, yes, there is twice the capacity right now.

When asked whether she would be assuring state governors that they could have these tests, though, Trump stepped in to claim that the United States had “tremendous testing capacity.” The press conference was concluded shortly thereafter.