The "7th largest pyramid in the world" is a Bass Pro Shops.

On November 25 2021, an Imgur account shared the following meme declaring that the seventh largest pyramid in the world was a Bass Pro Shops location: 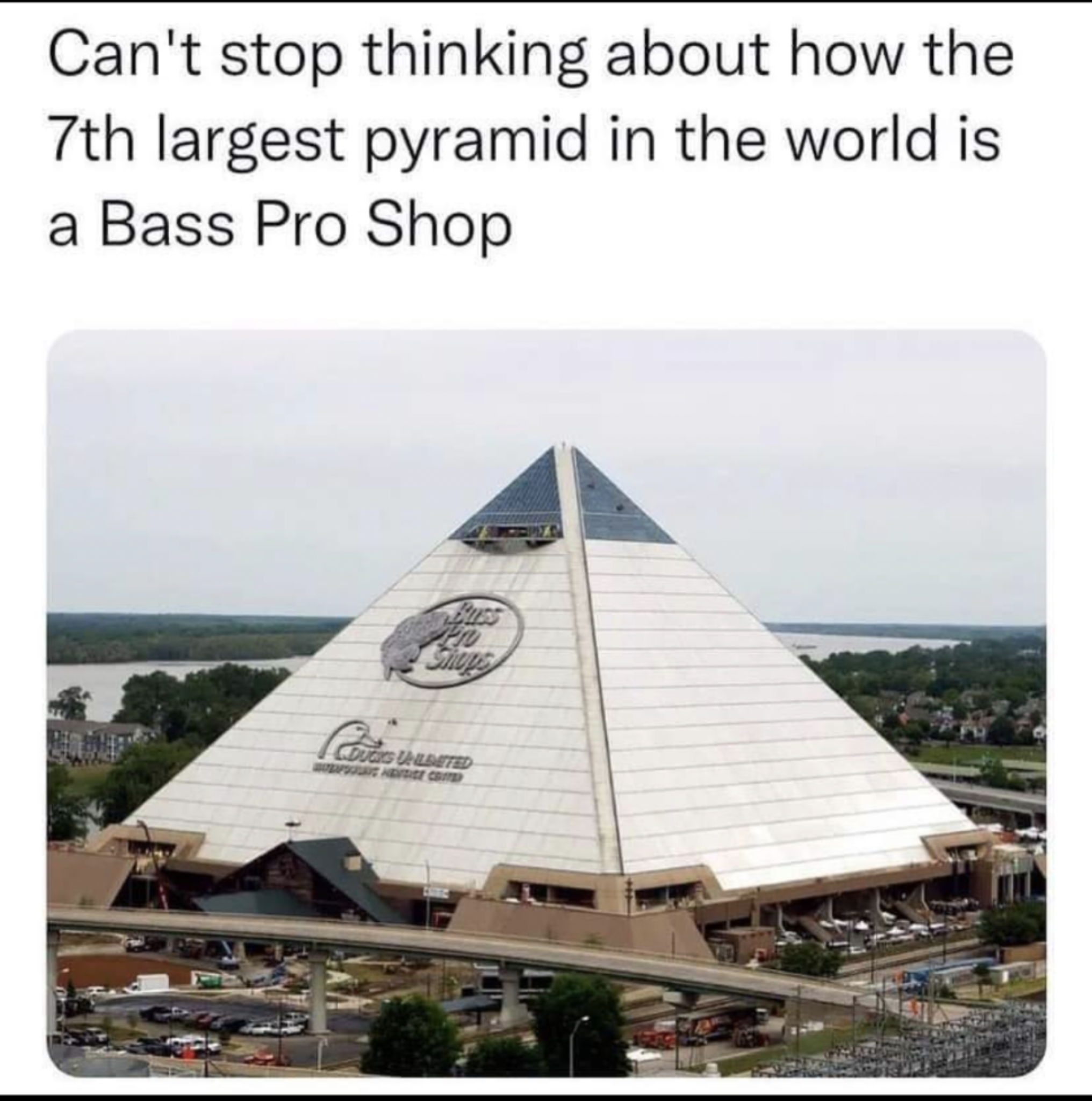 so apparently, the 7th largest pyramid is a bass pro shop from Davie504

Those waters were immediately muddied by the existence of a separate November 2021 post to r/Damnthatsinteresting, asserting that a Bass Pro Shops location was merely the world’s tenth largest pyramid:

The worlds 10th largest pyramid is a Bass Pro Shop located in Memphis, Tennessee from Damnthatsinteresting

TIL the 10th largest pyramid in the world is the Bass Pro Shops pyramid in Memphis, Tennessee from DungeonsAndDaddies

Of all the variations, the April 2020 r/todayilearned post linked to a source — a November 2017 Insider.com article with the headline, “One of the largest pyramids in the world is a Bass Pro Shops that was rumored to be cursed,” a fact that we thought was much more interesting than simply its size, but which for some reason did not make it into the meme.

At any rate, the linked reporting contained details that cast doubt on the ability to rank pyramids by size with accuracy:

At 321 feet, the building is a bit smaller than the Great Pyramid of Giza, which was originally 481 feet tall. It’s still pretty massive, typically ranking in the top 10 tallest pyramids in the world (exact ranking varies based on how pyramids’ sizes are measured).

Insider.com also noted that the building was not originally a Bass Pro Shops location, adding:

Originally, the Memphis pyramid was used as an event space and sports arena, serving as the home court for the University of Memphis men’s basketball team and the Memphis Grizzlies.

However, when the new FedExForum opened nearby, the basketball teams switched home courts, and the Great American Pyramid went dark.

Memphis struggled to find a company that was willing or able to find a use for the enormous pyramid, reportedly reaching out to everyone from Six Flags to Disney … Then, a potential savior appeared: Bass Pro Shop.

Clearly, the Bass Pro Shops pyramid (which was, as mentioned, originally an ill-fated event venue) was large, but whether it was considered the seventh or tenth largest pyramid in the world remained an elusive claim. Complicating matters, a travel blog decreed the Bass Pro Shops/Memphis pyramid the ninth largest in an undated post (with Las Vegas’ Luxor pyramid outranking it).

If any of the numerical rankings credibly applied, Bass Pro Shops didn’t reference them in their landing page for the Memphis pyramid location. Sci-fi site The Portalist left a bit more wiggle room in its examination of the purportedly cursed Memphis pyramid (in a 2019 item titled “Tomb of Doom: The Mysterious Past of the ‘Cursed’ Memphis Pyramid,”) electing to focus on the structure’s weirdness rather than its precise ranking:

It is one of the largest pyramids in the northern hemisphere and may be among the top 10 biggest pyramids in the world, depending upon how you measure. It has been called the “Tomb of Doom” and is rumored to have been cursed by the removal of a crystal skull. It’s also a Bass Pro Shop, and it’s located in Memphis, Tennessee.

All of these are true facts about the so-called “Memphis Pyramid,” one of the most peculiar modern landmarks in America, and a building with a history that is stranger than fiction.

But the pyramid was plagued with problems from before it even opened its doors. A torrential rain storm delayed construction and plans for shops and amenities in the structure fell through, including a music museum, a shortwave radio station, a nearby theme park, and a Hard Rock café. (Keep that last one in mind, as it will be important later.)

When the Memphis Pyramid did finally open its doors in 1991, its grand opening was a concert by country duo the Judds. Unfortunately, when a packed house all poured into the restrooms at the same time, the combined stresses of all those flushing toilets proved too much for the city’s sewer transfer station. The toilets backed up, flooding the arena with sewage. It seemed that the Memphis Pyramid was off to a less-than-auspicious start.

Wikipedia’s “Memphis Pyramid” entry began with a brief mention of the structure’s putative ranking among the world’s largest pyramids, citing a very thinly sourced listicle (attributed to “Steven”) from November 2013:

The Memphis Pyramid, formerly known as the Great American Pyramid and the Pyramid Arena, is a building located in downtown Memphis, Tennessee, United States, at the banks of the Mississippi River. Built in 1991 as a 20,142-seat arena, the facility was owned and operated jointly by the city of Memphis and Shelby County; Shelby County sold its share to Memphis in April 2009. Its structure plays on the city’s namesake in Egypt, known for its ancient pyramids. It is 321 feet (98 m) (about 32 stories) tall and has base sides of 591 feet (180 m); it is by some measures the tenth-tallest pyramid in the world.

Wikipedia’s atypically shaky sourcing mirrored an issue we encountered in our search for a credible ranking of the world’s pyramids by size alone — none seemed to exist, or if they did, they were buried under “fun fact” memes and listicles. Wikipedia’s “Categories” on the Memphis Pyramid page did not include any “largest pyramid” lists, but the site did maintain a “List of tallest pyramids.”

Using that very shaky foundation, adding the two larger modern pyramids to the four ancient pyramids would technically rank Bass Pro Shops seventh on the combined list, not tenth. But that didn’t seem to be enough to rate the claim as necessarily true, as other factors such as original size (for ancient pyramids) might be factored into a sincere attempt to rank pyramid size.

Moreover, the Memphis pyramid was technically the second smallest of four “modern pyramidal buildings” on the list. It was outranked by San Francisco’s Transamerica Pyramid at 853 feet, and Nevada’s Luxor Pyramid at 350 feet. As a “fun fact,” it seemed relevant that two larger “modern” pyramids existed in the United States (one of which was a casino and entertainment venue, resembling the destination Bass Pro Shops in Memphis).

Ultimately, the claim the world’s seventh largest pyramid was a Bass Pro Shops was difficult to verify — and probably originated with a re-ranking of Wikipedia’s “List of tallest pyramids,” where it was seventh when the lists were manually combined. We were unable to locate a sincere or combined ranking of the world’s tallest pyramids that wasn’t a travel blog post or listicle, and several sources observed that the Bass Pro Shops pyramid was seventh or tenth by “some” means of ranking. The claim is best described as Decontextualized, due to a tendency to separate modern pyramids from ancient ones and the existence of two larger “modern pyramidal buildings” in the United States.