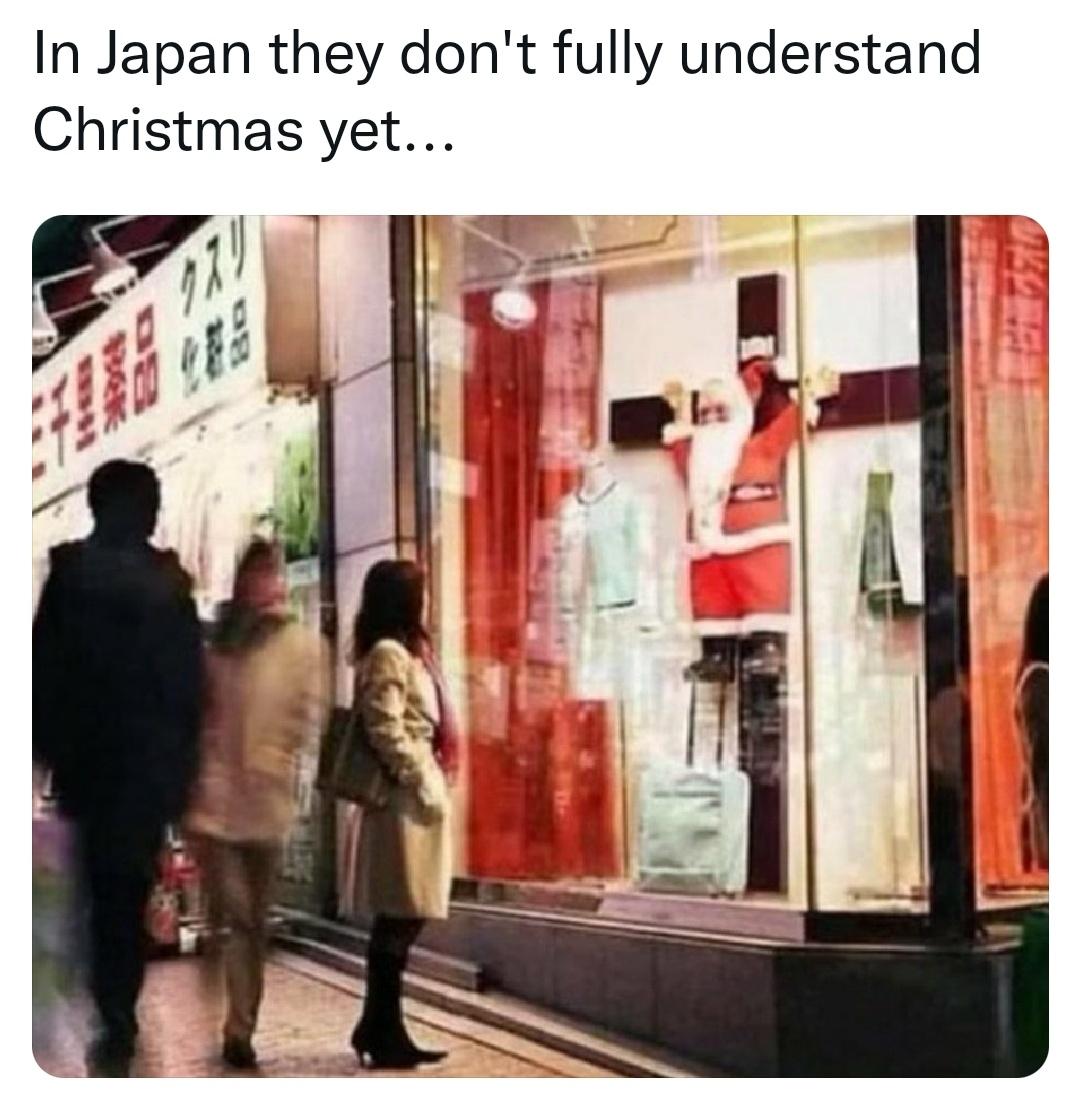 Two weeks earlier, an Imgur post featuring only the “Santa on the cross” meme was similarly popular on that site. It was also shared to r/funny with the same included text on December 27 2017:

yes sir, Christmas is a christian holiday, but… from funny

Reverse image search indicated that the image by itself was first crawled in January 2015, and first shared in December 2014. That post also appeared on Imgur, and was titled “Crucified Santa in Japan,” and Google’s reverse image search suggested the caption, “Japanese don’t get Christmas.”

Although the image seemed to overwhelmingly feature in memes of similar description (which were then taken at face value on social media), other crawled versions linked to articles explaining its context. It was featured in an April 2019 ABC Australia article mentioning urban legends and long-running myths, “Easter’s iconography is fluid, and sometimes people get their wires crossed.”

That article explained that the image may have been an example of ostension:

One of the most famous examples of this mistranslation is the story of a Japanese department store nailing Santa to a cross when the country first starting rolling out Christmas as a sales event.

The story’s been cited by various media organisations over the years including the BBC and The Economist, but images of its first appearance have been elusive.

This has not, however, stopped artists and those with image editing skills from referencing the long-cited tale over the years, including New York-based painter Robert Cenedella with his 1997 painting The Presence of Man.

In 2005, Japanese artist Yoshio Itagaki created the work Santa Cross as part of a series looking into urban legends, specifically for their propensity to reflect “uncensored reflection of our desires, fears, expectations or curiosity”.

In December 2014, just before the iteration widely shared and embedded above began circulating, Independent.co.uk addressed the rumor upon which the image was based:

If you type “crucified Santa” into Google Images, you’ll see that various idiots have mocked up pictures of the jolly old soul nailed to a cross; or gone one better, donning Father Christmas outfits and posing like the dying Christ on crosses of their own; all in tribute to one of the world’s great cultural confusions.

The story goes that, some time after the American occupation of post-war Japan, its inhabitants were first exposed to the non-religious aspects of Christmas – elves, grottoes, sleigh bells and the rest – and came to understand that the fat man from the North Pole had something to do with the birth of Jesus (best remembered in those parts not for his humble birth but for his gruesome end).

It also explained that an urban legend about a crucified Santa far antedated social media, adding:

Unfortunately, the story’s too good to check – because it never happened … the Japanese Passion of Santa Claus is an urban myth.

Although The Washington Post reported it in 1995 and The Economist in 1993, there are no photographs or first-person recollections. The source has been at best what modern folklorists call a “foaf”, or “friend of a friend”. The incident has been variously dated to the 1940s, 1960s and 1980s – in these publications and others – and located in both Tokyo and Kyoto.

Images of Santa on a cross or crucified have circulated since at least 2014, with iterations of the rumor dating back to 1993 or earlier. The image commonly labeled “in Japan, they don’t fully understand Christmas yet” circulated with that misleading caption as early as 2017, but the context of the photograph was almost never included. Artist Yoshio Itagaki’s “Santa Cross” was from 2005, and it wasn’t a misunderstanding of Christmas in Japan. In actuality, Itagaki’s attempt to illustrate the “legend” about a Japanese department store’s “Christmas display featuring Santa Claus nailed to a cross” spread — either ironically or predictably — alongside the claim it showed the very event it satirized.