A "don't do drugs" pencil was recalled in the 1990s, because its message changed as the pencil was sharpened over time.

On November 22 2021, Imgur user CeleryMan7 shared a meme about a “don’t do drugs pencil” and its purported recall in the 1990s: 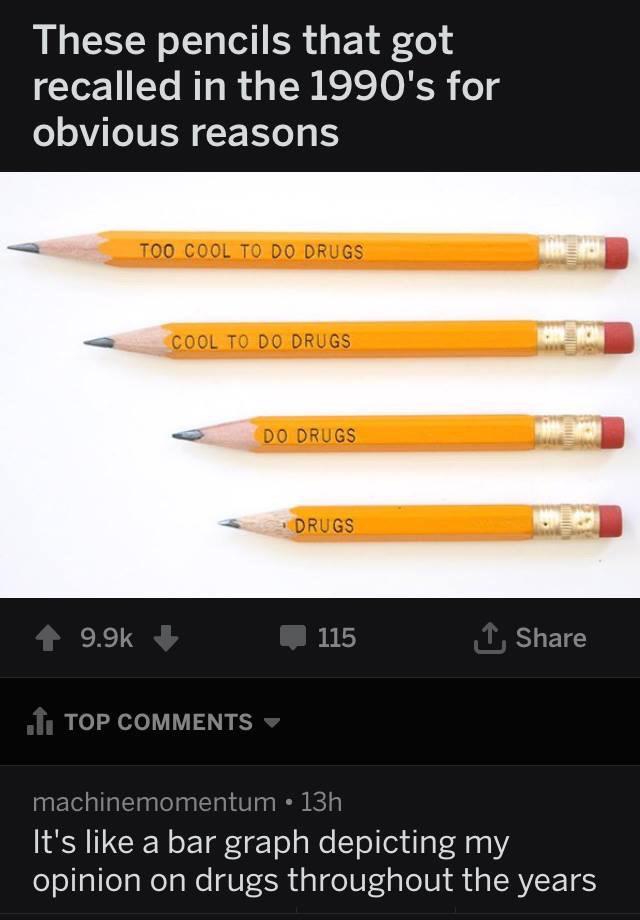 At the top of the image was text reading “These pencils that recalled in the 1990s for obvious reasons,” and a response from a commenter saying, “It’s like a bar graph depicting my opinion on drugs throughout the years” was at the bottom. In the middle was an image of progressively sharpened pencils, reading:

TOO COOL TO DO DRUGS

COOL TO DO DRUGS

That meme seemed to be in circulation during the seven-day period ending November 23 2021, as evidenced by Google Trends searches for “don’t do drugs pencil.” An initial search immediately returned the source of the screenshot, a February 2019 post to Reddit’s r/facepalm (with the comment in the screenshot rendering as the top comment on the thread):

Our reverse image search revealed that the pencil shown here was not from the 1990s. The site Laughing Squid blogged about the item in February 2014, linking to the site that produced the pencils for retail sale and its product description:

Based on an actual pencil distributed to school children by an anti-drug group in the late 1990s that had to be recalled.

However, it didn’t stop there — a Google search for “pencils recalled in the 90s” returned as its top result a December 1998 article, “Slogan Causes Pencil Recall,” reporting:

TICONDEROGA, N.Y., Dec. 11 [1998]— A company has recalled a batch of pencils after a fourth-grade student pointed out an embarrassing message that appeared after he sharpened his pencil.

The article quoted a spokesperson as saying the company was “actually a little embarrassed that [it] didn’t notice that sooner.” The story also reported that the pencil was redesigned to feature the same message in the opposite direction, reading “too cool” when sharpened.

Although the image was likely from the 2014 reproduction, the “don’t do drugs pencil” meme was accurate. In 1998, a pencil manufacturer recalled its “Too Cool to Do Drugs” pencils after a fourth-grader observed that the message shortened to “Do Drugs” when sharpened.