“Be Like Bill” Meme Poses Security Threat-Reported as Fiction!

Summary of eRumor:
The Better Business Bureau warns that a popular “Be Like Bill” meme on Facebook is a clickbait scam that could harm your computer.
The Truth:
The Better Business Bureau raised questions about the “Be Like Bill” meme generator, but so far there’s no indication that it’s harmful to computers.
Blobla.com created and launched the Be Like Bill meme generator in October 2015. By January 2016, customized versions of the meme had gone viral on Facebook. The generator works like this: users enter their name and gender, and it generates a customized meme with advice to others, often in the realm of social media etiquette: 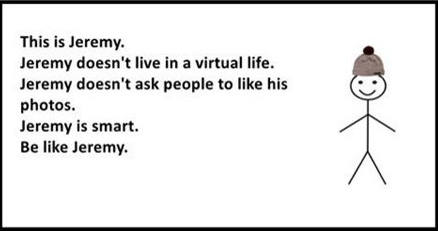 Not much is known about Blobla.com. The website has a privately registered domain, and it appears to be run from Asia based on its default language settings.
Warnings that the Be Like Bill meme generator could be harmful surfaced in January 2016 as Facebook users found their news feeds flooded with the meme. Better Business Bureau (BBB) spokesperson Katherine Hutt said the group had launched an investigation of the site and had brought unspecified concerns to the attention of Facebook:

“It’s critical to read the terms of any online agreement (including privacy statements) before clicking ‘I Agree’ or sharing personal information,” says Hutt. “Many of these sites were created solely for the purpose of harvesting data for resale, and by simply playing a game or taking a quiz, you could be giving the app access to a tremendous amount of information about you, your friends, the things you like, the things you buy, and more.”

CBS News affiliate KFVS reports that the investigation stems from a since-removed excerpt from Blobla.com’s Terms of Use: “You will allow us to use, edit your content with our service permanently, no limit and no recover.”
To be clear, the so-called security threat was limited to those who had used the meme generator. Be Like Bill memes generated by other that appear in your news feed don’t pose any threat at all.
That sentence no longer appears in the website’s Terms of Service. Bloba.com told the CBS affiliate that it was removed to “avoid confusion.” The phrase was there, the company said, so that user-generated memes could be translated into other languages.
Despite widespread reports that Be Like Bill memes are harmful to computers, there’s no evidence to support that claim. It’s true that the BBB launched an investigation, but news outlets across the country “jumped the shark” by concluding that the Be Like Bill meme was harmful to computers. We’ll update the story here as it develops.
In the meantime, the BBB cautions those who use third-party apps and websites like the Be Like Bill generator to read the terms of service before trusting them. Click here for more tips on how to protect yourself from clickbait scams.