A beauty therapist cut a client's eyelashes off at the root after her payment method was declined.

On May 9 2021, UK tabloid The Sun (along with its Scottish counterpart) published an item with the shocking headline, “Beauty therapist CUTS OFF woman’s eyelashes after her card payment fails”: 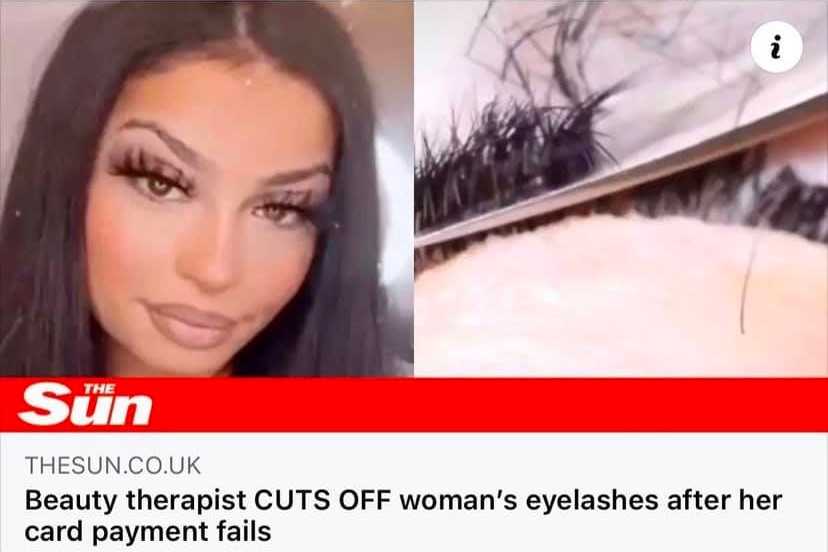 The Rumor and The Sun

Screenshots like the one above circulated on social media, serving as a discussion prompt for people working in the beauty industry. On the left was a photograph of a person with lash extensions (or strip lashes), and on the right, a thumbnail screen capture showed a close-up lash line where half the lashes had been chopped to the root, with scissor blades poised to away cut the other half.

A version of the story existed on Flipboard on May 10 2021 (“Beauty therapist CUTS OFF woman’s eyelashes after her card payment fails”), and a brief preview read:

THIS lash technician showed her response when a client couldn’t pay for her new eyelashes – and it’s extreme. Tiktok user @lashesbyleenax shared a …

Clicking “Read more on thesun.co.uk” led to the following URL, which matched the screenshot preview and Flipboard post:

That item included a date of publication (May 9 2021), and an unspecified update on May 10 2021. But a day after it was published, the headline was subtly altered:

In the article, the tabloid claimed:

THIS lash technician showed her response when a client couldn’t pay for her new eyelashes – and it’s extreme.

Tiktok user @lashesbyleenax shared a video of herself apparently cutting off her client’s eyelashes with scissors after her card declined.

She captioned the video with the phrase “#worstclient”, but viewers can’t believe the lash tech would be so harsh.

The video appears to show the lash tech cutting off her client’s lashes – and not just her new lash extensions, but her natural eyelashes too.

A section following was possibly edited in after the first version of the article appeared:

The Sun has not been able to verify whether the beautician really cut off a client’s lashes or if the video is a joke.

The Sun did provide a source for the story, in the form of a May 6 2021 TikTok video by @lashesbyleenax:

@lashesbyleenax’s video was set to the song “Oh No” by Kreepa, and it was accompanied by the following text:

As noted by The Sun, @lashesbyleenax’s video quickly surpassed a million views, which served as viral marketing for the original poster; while the outlet stated it wasn’t able to determine if the clip was sincere, TikTok commenters described it as “clearly a joke.”

On May 9 2021 (one day prior to the story’s update), @lashesbyleenax posted a different video clarifying tha she did not, in fact, cut off her clients’ eyelashes for non-payment:

Alongside the clip depicting a lash removal, @lashesbyleenax wrote:

‘Imagine If Your Card Declined’ Meme

Although @lashesbyleenax affirmed that she only removed lashes in the standard way, an element of the tabloid’s coverage of her viral video was failure to understand meme culture generally and how specific memes manifest on TikTok.

The @lashesbyleenax’s video was almost certainly an industry-specific iteration of the mid-2020 meme (or snowclone) known as “imagine if your card declined.” That meme was fairly self-descriptive, and involved the common modern experience of fearing a credit or debit card would be declined after receiving a service, offsetting the inherent embarrassment of the situation by joking about increasingly outlandish things that might happen as a result:

Imagine Your Card Declines refers to a snowclone which grew popular on Twitter in the fall of 2020 in which people imagine scenarios where a credit card gets declined at an unusual establishment, causing the staff of the establishment to undo the work they’ve already started in a creative way.

Through the end of August and the beginning of September 2020, the format surged in popularity as people thought of various creative ways establishments could undo service they’d already begun. For example, Twitter user @aintshitjunior tweeted, “Imagine your card declines at daycare and they keep your kid,” gaining over 30,000 retweets and 274,000 likes […]

At the time, a number of listicles curated the increasingly bizarre examples of the “imagine if your card declines” Twitter meme:

TikTok is a more visual format than Twitter and therefore usually includes video, but it wasn’t difficult to figure out that this particular clip was another variation on that meme, even before the subsequent clarification from the lash technician.

A British tabloid The Sun published a story with the shocking headline, “Beauty therapist CUTS OFF woman’s eyelashes after her card payment fails” on May 9 2021, based solely on @lashesbyleelax’s viral video, captioned “When it’s time to pay and her card declines.” That headline was later altered to add the rather less shocking modifier, “apparently,” along with text that was added to the story about the nature of the clip being unclear. Also on May 9 2021, @lashesbyleelax — somewhat unnecessarily — confirmed that the TikTok video was indeed a joke, and she further demonstrated how lash removal worked. On the surface, the clip was clearly an iteration of the “imagine if your card declines” meme, but specific to lash technicians.