Twitter user Benny Johnson deleted an August 6 2022 tweet in which he falsely asserted: "Trump’s enthusiasm is bigger than in 2016 — this is from last night in Wisconsin. massive. Just massive."

On August 6 2022, Twitter user Ron Filipkowski tweeted a screenshot of a tweet that was purportedly posted, and then quietly deleted by right-wing blogger Benny Johnson, in which Johnson shared an image that he claimed was from a rally for former United States President Donald Trump in Wisconsin on August 5 2022:

The only surprising thing here is he actually deleted this after getting called out for posting an obviously fake pic. pic.twitter.com/M05PwLYStJ

Filipkowski’s tweeted that it was surprising that Johnson had actualy deleted the tweet in the screenshot “after getting called out for posting an obviously fake pic.” Johnson’s purported tweet read:

Trump’s enthusiasm is bigger than in 2016 — this is from last night in Wisconsin. massive. Just massive[.]

An initial scroll of Johnson’s timeline for August 6 2022 did not turn it up, supporting Filipkowski’s claim that it may have been deleted.  On August 5 2022, Johnson tweeted clips of Trump speaking in Wisconsin:

TRUMP ON PELOSI: “What was she doing in Taiwan? She was China’s dream. She gave them an excuse.” pic.twitter.com/YX3uMFOYlG

An August 8 2022 Google search returned two virtually identical blog posts, one on webtimes.uk and one on WayneDupree.com. They each began identically, and falsely:

[VIDEO] No, This Isn’t A Photo From A 2016 Trump Rally … It’s From LAST NIGHT In Wisconsin

Can you imagine being Liz Cheney or Joe Biden right now and seeing photos from Trump’s Waukesha, Wisconsin rally last night [August 5 2022]? It looks like Lalapalooza, for crying out loud. The crowd was massive. I actually don’t know if Joe has the mental capacity left to even understand what’s happening, but his team can see the writing on the wall, and Liz Cheney knows exactly what’s happening. All of her tireless work trying to “destroy” President Trump has been for nothing, he’s more popular than ever. And the only thing she actually destroyed was her own career. The irony is just so sweet and delicious.

On Archive.is, we searched for recently archived tweets by Benny Johnson. The most recently archived post was the August 6 2022 tweet itself, in which Johnson claimed the attached image was from August 5 2022 in Wisconsin: 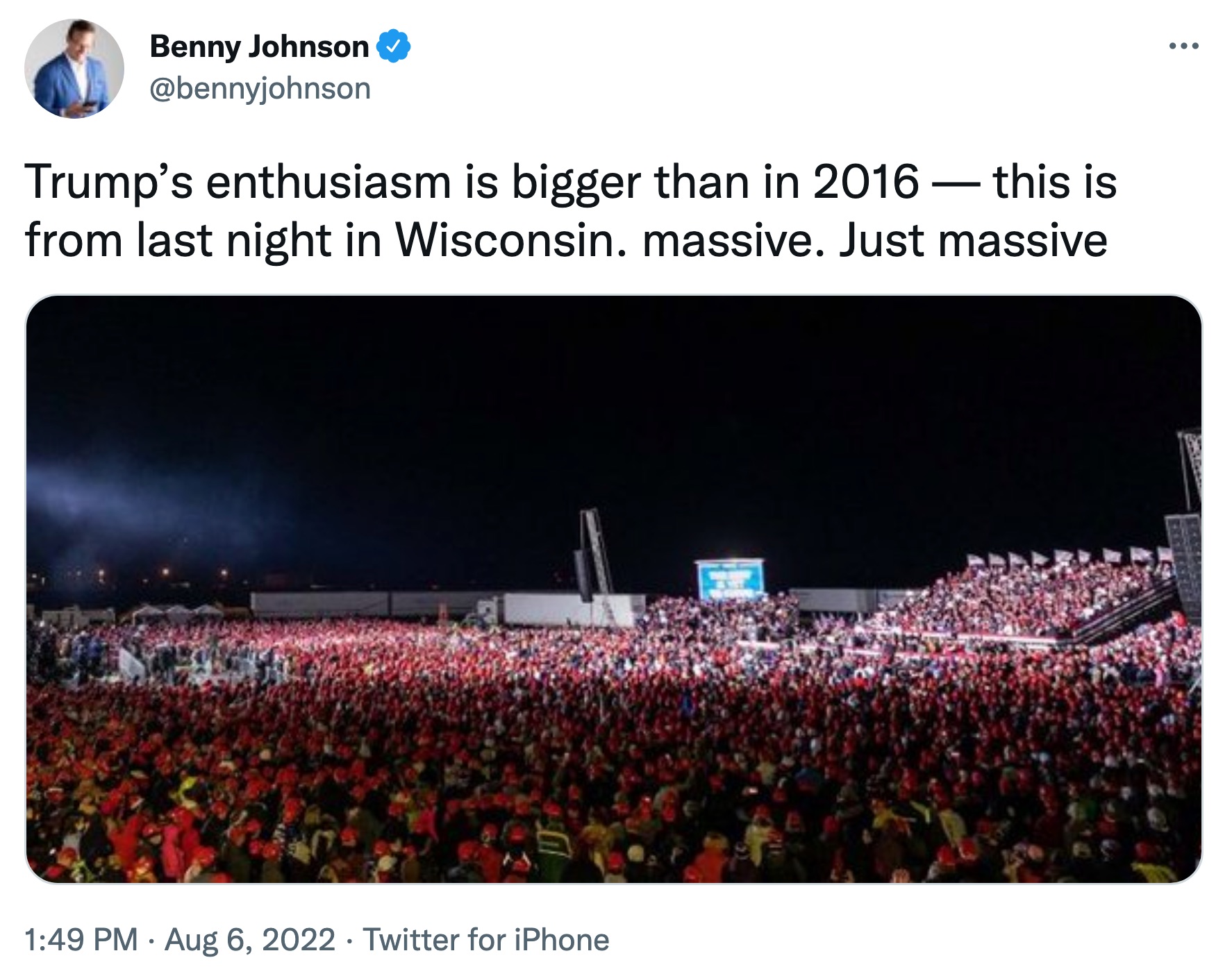 A scan of Johnson’s Twitter feed provided no explanation for the deleted tweet, nor could we find any correction or update, or indeed any reference to it at all.

We were able to find the exact same image shared by Eric Trump on November 16 2020, shortly after his father Donald Trump lost the 2020 election to Democratic Party nominee Joe Biden. In Eric Trump’s November 2020 tweet, he complained that Biden “couldn’t get 10 people to a rally,” but he did not provide context for the image in his tweet:

Biden couldn’t get 10 people to a rally & went days without leaving his house. @realDonaldTrump received 11 million more votes than 2016, nearly doubled African American support – this was every stop, multiple times a day. This election was rigged from the beginning. pic.twitter.com/iM3tcSIMmf

“Biden didn’t need to hold Nuremberg-style hate rallies to garner votes; he just had to be sane … which your father is not … Biden won, decisively. Get over it.”

“Well ignore the corruption and complete ass of a job with the pandemic and he was so-so. People got tired of incompetence.

“People with a life don’t need to go to cult rallies[.]”

We were unable to trace the image back further than November 16 2020, and its lack of matches suggested Eric Trump may have both photographed and shared the image. Nevertheless, it was conclusively taken on or before November 16 2020, and was not captured in Wisconsin on August 5 2022; it was further unclear how Johnson selected the image, nor was it immediately obvious how he could somehow be unaware that his claim was false.

Filipkowski tweeted a screenshot of a tweet by Benny Johnson, tweeted and deleted on August 6 2022. Johnson wrote “Trump’s enthusiasm is bigger than in 2016 — this is from last night in Wisconsin … massive … Just massive … ” falsely claiming an image he attached was taken on August 5 2022 in Wisconsin. In actuality, the image was taken on or before November 16 2020, and did not depict any Trump rallies in 2022. Johnson then deleted the tweet quietly, without acknowledgement.