On June 1 and 2 2021, a number of the usual disinformation purveyors claimed that United States President Joe Biden said Black entrepreneurs “don’t have lawyers and accounts like white business owners” in what appeared to be an inauthentically organized messaging push: 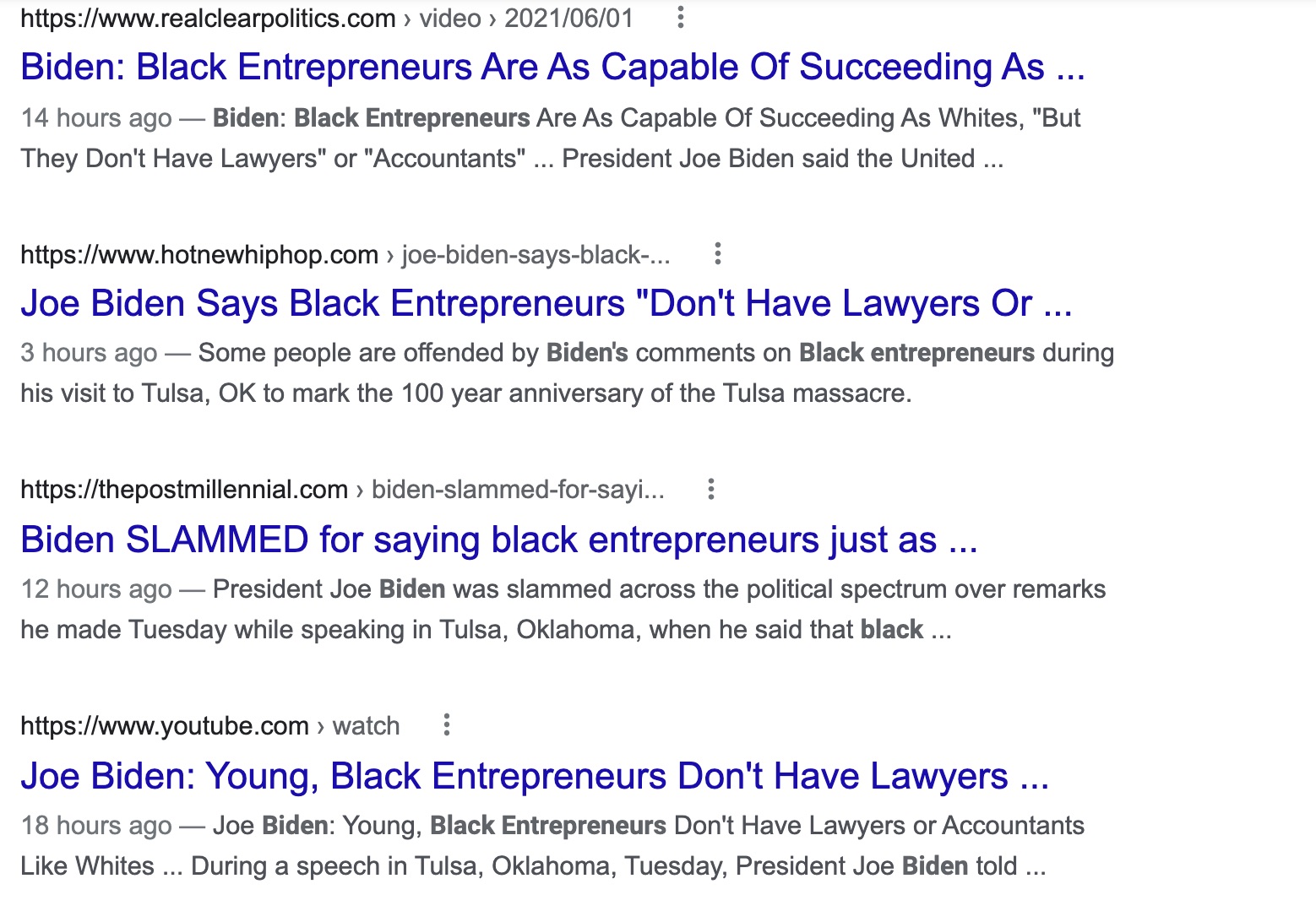 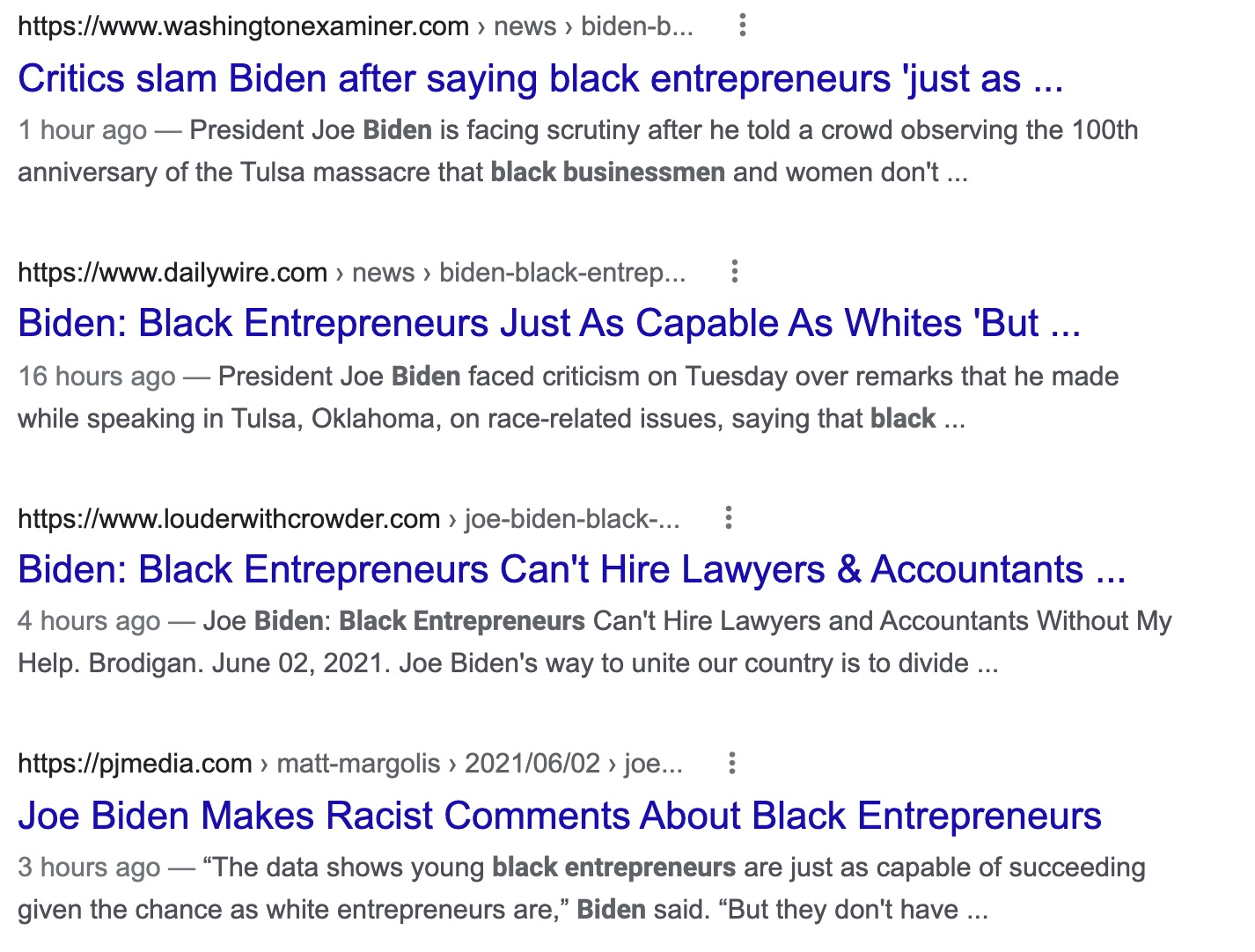 One such item was published by Hannity.com:

Hannity.com’s reporting was, as usual, a brief blurb that largely relied on an attached video. It began:

Joe Biden stunned millions of Americans during a televised address from Tulsa, Oklahoma where he bizarrely claimed that most ‘Black Entrepreneurs’ don’t have accountants and lawyers.

Excerpts of Biden’s clipped remarks circulated on Twitter, extremely creatively paraphrased (and occasionally standing in for original reporting in articles about the controversy):

Wait until Joe Biden finds out black people are lawyers and accountants. https://t.co/Wqmb0Nrmgp

According to Joe Biden black people don’t know how to get an ID, hire a lawyer or find an accountant…and if they don’t vote for him they ain’t black.

But yea, Republicans are the real racists.

The most popular clip in one of the above tweets was 29 seconds long, captured from a Fox News segment; a chyron read “Biden Discusses Closing Racial Wealth Gap.” However, two full transcripts of the remarks were available one day after the June 1 2021 speech by Biden.

The official transcript began with some descriptions of Biden’s interactions with audience members, before he began his prepared remarks. Initially, Biden acknowledged the Tulsa massacre of 1921, and pledged to ensure the story would “be known in full view” a century after the events of the massacre:

Lauren, thank you for that gracious introduction. And in case you were wondering, I — in Delaware — we’re a small state — we have the eighth-largest Black population in America, and we have one of the most talented members of Congress. And so if I didn’t walk around and pay my tribute to Lisa Blunt Rochester my congresswoman — (applause) — immediately, that was … We’ve got a distinguished group of people here, and I want to thank Lauren for sharing the powerful story and for helping the country understand what’s happening here.

And to all of the descendants here today, and to the community and civil rights leaders, and members of the Congressional Black Caucus that are here: Thank you for making sure we all remember and we never forget.

You know, there’s a verse in First Corinthians that says, “For now, we see in a mirror dimly, but then, face to face, now I know in part, then I shall know fully.”

It is — I just toured the Hall of Survivors here in Greenwood Cultural Center, and I want to thank the incredible staff for hosting us here. And — (applause) — I mean that sincerely. Thank you.

And if I didn’t say what my father would insist on, please excuse my back. (Laughter.) I apologize.

You are the three known remaining survivors of a story seen in the mirror dimly. But no longer. Now your story will be known in full view.

Biden continued, addressing the “hidden history” of the events in Tulsa in 1921:

The events we speak of today took place 100 years ago. And yet, I’m the first President in 100 years ever to come to Tulsa — (applause) — I say that not as a compliment about me, but to think about it — a hundred years, and the first President to be here during that entire time, and in this place, in this ground, to acknowledge the truth of what took place here.

For much too long, the history of what took place here was told in silence, cloaked in darkness. But just because history is silent, it doesn’t mean that it did not take place. And while darkness can hide much, it erases nothing. It erases nothing. Some injustices are so heinous, so horrific, so grievous they can’t be buried, no matter how hard people try.

Biden continued by describing Black businesses thriving in Tulsa in May 1921 then segueing into the events of June 1 1921. He quoted survivors of the massacre and their children:

May 1921: Formerly enslaved Black people and their descendants are here in Tulsa — a boom town of oil and opportunity in a new frontier.

On the north side, across the rail tracks that divided the city already segregated by law, they built something of their own, worthy — worthy of their talent and their ambition: Greenwood — a community, a way of life. Black doctors and lawyers, pastors, teachers; running hospitals, law practices, libraries, churches, schools.

Black veterans, like a man I had the privilege to giving a Command Coin to, who fought — volunteered and fought, and came home and still faced such prejudice. (Applause.) Veterans had been back a few years helping after winning the first World War, building a new life back home with pride and confidence, who were a mom-and — they were, at the time — mom-and-plack [sic] — mom-and-pop Black diners, grocery stores, barber shops, tailors — the things that make up a community.

At the Dreamland Theatre, a young Black couple, holding hands, falling in love. Friends gathered at music clubs and pool halls; at the Monroe family roller-skating rink. Visitors staying in hotels, like the Stradford.

All around, Black pride shared by the professional class and the working class who lived together, side by side, for blocks on end.

But one night — one night changed everything. Everything changed. While Greenwood was a community to itself, it was not separated from the outside.

It wasn’t everyone, but there was enough hate, resentment, and vengeance in the community. Enough people who believed that America does not belong to everyone and not everyone is created equal — Native Americans, Asian Americans, Hispanic Americans, Black Americans. A belief enforced by law, by badge, by hood and by noose.

One hundred years ago at this hour, on this first day of June, smoke darkened the Tulsa sky, rising from 35 blocks of Greenwood that were left in ash and ember, razed and in rubble.

Less than 24 hours — in less than 24 hours, 1,100 Black homes and businesses were lost. Insurance companies — they had insurance, many of them — rejected claims of damage. Ten thousand people were left destitute and homeless, placed in internment camps.

As I was told today, they were told, “Don’t you mention you were ever in a camp or we’ll come and get you.” That’s what survivors told me.

Yet no one — no arrests of the mob were made. None. No proper accounting of the dead. The death toll records by local officials said there were 36 people. That’s all. Thirty-six people.

But based on studies, records, and accounts, the likelihood — the likely number is much more, in the multiple of hundreds. Untold bodies dumped into mass graves. Families who, at the time, waited for hours and days to know the fate of their loved ones are now descendants who have gone 100 years without closure.

From there Biden continued for some time, describing suppressed events in Tulsa and their impact on Black residents over the ensuing century:

Imagine all those hotels and dinners [diners] and mom-and-pop shops that could been — have been passed down this past hundred years. Imagine what could have been done for Black families in Greenwood: financial security and generational wealth.

If you come from backgrounds like my — my family — a working-class, middle-class family — the only way we were ever able to generate any wealth was in equity in our homes. Imagine what they contributed then and what they could’ve contributed all these years. Imagine a thriving Greenwood in North Tulsa for the last hundred years, what that would’ve meant for all of Tulsa, including the white community.

While the people of Greenwood rebuilt again in the years after the massacre, it didn’t last. Eventually neighborhoods were redlined on maps, locking Black Tulsa out of homeownerships. (Applause.) A highway was built right through the heart of the community. Lisa, I was talking about our west side — what 95 did to it after we were occupied by the military, after Dr. King was murdered. The community — cutting off Black families and businesses from jobs and opportunity. Chronic underinvestment from state and federal governments denied Greenwood even just a chance at rebuilding. (Applause.)

At length, Biden then spoke about redlining and its impact on Black homeownership:

Shockingly, the percentage of Black American homeownership is lower today in America than when the Fair Housing Act was passed more than 50 years ago. Lower today. That’s wrong. And we’re committing to changing that.

Just imagine if instead of denying millions of Americans the ability to own their own home and build generational wealth, we made it possible for them to buy a home and build equity into that — into that home and provide for their families.

Biden subsequently described small businesses as “engines of our economy and the glue of our communities,” continuing into the circulating remarks:

We have a thing called — I won’t go into it all because there’s not enough time now. But I’m determined to use every taxpayer’s dollar that is assigned to me to spend, going to American companies and American workers to build Ameri– to build American products. And as part of that, I’m going to increase the share of the dollars the federal government spends to small, disadvantaged businesses, including Black and brown small businesses.

Right now, it calls for 10 percent; I’m going to move that to 15 percent of every dollar spent will be spent (inaudible). (Applause.) I have the authority to do that.

Just imagine if, instead of denying millions of entrepreneurs the ability to access capital and contracting, we made it possible to take their dreams to the marketplace to create jobs and invest in our communities.

Does anyone doubt this whole nation would be better off from the investments those people make? And I promise you, that’s why I set up the — a national Small Business Administration that’s much broader. Because they’re going to get those loans.

Does anyone doubt this whole nation would be better off with these investments? The rich will be just as well off. The middle class will do better, and everybody will do better. It’s about good-paying jobs, financial stability, and being able to build some generational wealth. It’s about economic growth for our country and outcompeting the rest of the world, which is now outcompeting us.

Biden’s remarks commenced at 3:15 PM local time and concluded at 3:54 PM, and they consisted of about 5,000 words. Biden’s speech was titled “Remarks by President Biden Commemorating the 100th Anniversary of the Tulsa Race Massacre,” and the first half of the speech was indeed about what occurred in Tulsa on June 1 1921.

Biden’s statement that Black entrepreneurs “don’t have lawyers” and “don’t have accountants” was excerpted from a far, far longer and more nuanced portion about how historical events like the 1921 Tulsa massacre disrupted generational wealth-building, and how practices like redlining then continued exacerbated the effects.

It’s true that United States President Joe Biden said that “the data shows young Black entrepreneurs are just as capable of succeeding, given the chance, as white entrepreneurs are, [but] they don’t have lawyers,” “they don’t have accountants” — but those remarks were excerpted from nearly 40 minutes of speaking. In that context, Biden prefaced that partial statement with integral context — context noticeably absent from the 29-second-long Twitter clips.