A large number of black Americans died in a 1921 race riot in Tulsa, but that event was suppressed or removed from historical texts and references.

In February 2019, a meme about the 1921 Tulsa race riot was shared to Facebook, racking up tens of thousands of shares in 24 hours: 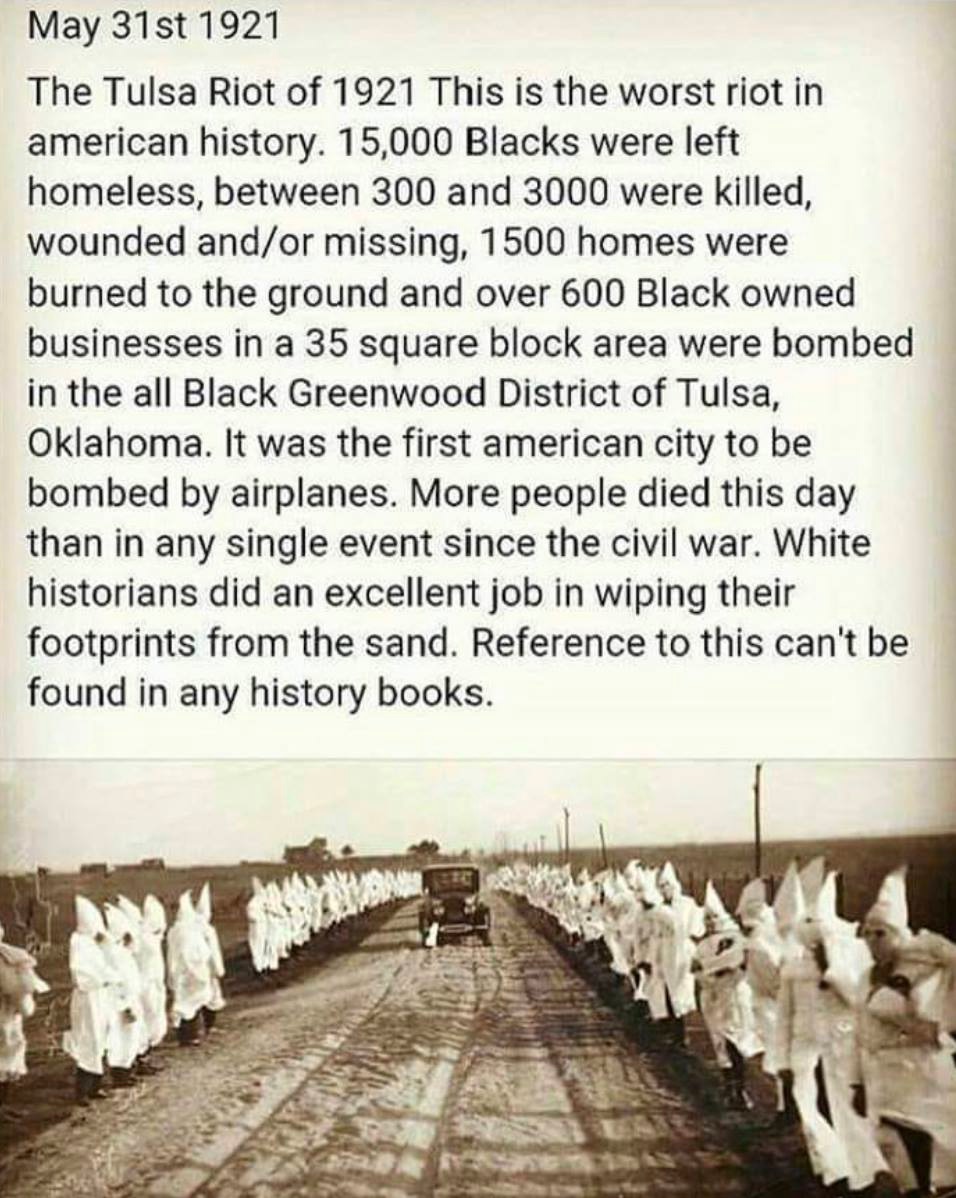 Above what looked to be an archival photograph of Ku Klux Klan members lining a dirt road, and caption (“History we should all know”), it read:

The Tulsa riot of 1921 This is the worst riot in american history. 15,000 blacks were left homeless, between 300 and 3000 were killed, wounded and/or missing, 1500 homes were burned to the ground and over 600 Black owned businesses in a 35 square block area were bombed in the all Black Greenwood District of Tulsa, Oklahoma. It was the first american city to be bombed by airplanes. More people died this day than in any single event since the civil war. White historians did an excellent job in wiping their footprints from the sand. Reference to this can’t be found in any history books.

The meme’s claims were twofold: first that an event in Tulsa in 1921 devastated black communities and killed a large number of people, and second that said event was deliberately suppressed from history books. The meme also stated that the 1921 Tulsa race riot had the highest single-event death toll since the Civil War, which seemed questionable given the single-day casualty count for September 11th 2001 (2,753.)

A number of the meme’s claims were addressed in a fairly comprehensive resource — Britannica.com. The first paragraph addressed nearly the totality of claims, noting that the incident was poorly documented until the 1990s:

Tulsa race riot of 1921, also called Tulsa race massacre of 1921, race riot that began on May 31, 1921, in Tulsa, Oklahoma, and was one of the most severe incidents of racial violence in U.S. history. Lasting for two days, the riot left somewhere between 30 and 300 people dead, mostly African Americans, and destroyed Tulsa’s prosperous black neighbourhood of Greenwood, known as the “black Wall Street.” More than 1,400 homes and businesses were burned, and nearly 10,000 people were left homeless. Despite its severity and destructiveness, the Tulsa race riot was barely mentioned in history books until the late 1990s, when a state commission was formed to document the incident.

The Oklahoma Historical Society maintained a timeline-style account of the Tulsa race riot, including the incident which caused it — and the role of a since-lost editorial in inciting racist attacks against black residents of the city:

Believed to be the single worst incident of racial violence in American history, the bloody 1921 Tulsa race riot has continued to haunt Oklahomans to the present day. During the course of eighteen terrible hours on May 31 and June 1, 1921, more than one thousand homes and businesses were destroyed, while credible estimates of riot deaths range from fifty to three hundred. By the time the violence ended, the city had been placed under martial law, thousands of Tulsans were being held under armed guard, and the state’s second-largest African American community had been burned to the ground.

Eight months [after a lynching in August 1920] an incident involving Dick Rowland, an African American shoe shiner, and Sarah Page, a white elevator operator, would set the stage for tragedy. While it is still uncertain as to precisely what happened in the Drexel Building on May 30, 1921, the most common explanation is that Rowland stepped on Page’s foot as he entered the elevator, causing her to scream.

The next day, however, the Tulsa Tribune, the city’s afternoon daily newspaper, reported that Rowland, who had been picked up by police, had attempted to rape Page. Moreover, according to eyewitnesses, the Tribune also published a now-lost editorial about the incident, titled “To Lynch Negro Tonight.” By early evening there was, once again, lynch talk on the streets of Tulsa.

That account noted that Rowland was exonerated after the riots concluded, but that no one was brought to justice for the deaths. However, it also held that the total number of deaths caused ranged between 50 and 300. A collection of articles published at the time of the incident demonstrated the same broad range across publications.

Much of what we know about the Tulsa riots indeed comes from modern reporting and historical sleuthing. An October 2018 Washington Post article reported that the animus of white residents due to the prosperity of Greenwood was a primary factor in the violence and looting carried out during the riots:

The massacre began on May 31, 1921, when white mobs descended on Greenwood, burning houses and shooting black people. Some people were burned alive, and 40 square blocks of business and residential property — valued then at more than $1 million — were destroyed.

The rampage, which lasted 48 hours, left more than 10,000 black residents of Greenwood homeless and as many as 300 black people dead.

Witnesses to the massacre recalled seeing white mobs looting homes of black people, pulling out finely carved furniture, pianos, mink and leopard coats, before setting the houses on fire. There were reports that hundreds of bodies were thrown into the Arkansas River or buried in mass graves.

As Tulsa prepares to commemorate the 100th anniversary of the rampage, the mayor promised the city would reinvestigate the possibility of mass graves. “We owe it to the community to know if there are mass graves in our city,” Bynum said. “We owe it to the victims and their family members. We will do everything we can to find out what happened in 1921.”

City officials, working with a retired state archaeologist, plan to reexamine two Tulsa cemeteries and a former dump, which were identified in 1998 by the Tulsa Race Riot Commission as possible mass grave sites.

In May 2016, Smithsonian published a piece on the riots, an article that centered on what it described as a “long-lost” eyewitness account of the brutality and murders. Curator Paul Gardullo discussed the relevance of such an account, as well as the efforts in the late 1990s and early 2000s to make restitution to survivors of the community (attempts which were unsuccessful):

As in other places, the Tulsa race riot started with newspaper reports that a black man had assaulted a white elevator operator. He was arrested, and [witness Buck Colbert Franklin] says black World War I vets rushed to the courthouse to prevent a lynching.

“Then whites were deputized and handed weapons, the shooting starts and then it gets out of hand,” Franklin says. “It went on for two days until the entire black community is burned down.”

In 2001, the Tulsa Race Riot Commission issued a report detailing the damage from the riots, but legislative and legal attempts to gain reparations for the survivors have failed.

The Tulsa race riots aren’t mentioned in most American history textbooks, and many people don’t know that they happened.

Curator Paul Gardullo says the crucial question is why not?

“Throughout American history there’s been a vast silence about the atrocities that were performed in the service of white history. . . . There are a lot of silences in relation to this story, and a lot of guilt and shame,” Gardullo explains. That’s one reason why the events of May 31 and June 1, 1921, will be featured in an exhibition at the new museum called “The Power of Place.” Gardullo says the title is about more than geography.

“(It’s) the power of certain places, about displacement, movement, about what place means for people,” he says. “This is about emotion and culture and memory. … How do you tell a story about destruction? How do you balance the fortitude and resilience of people in response to that devastation? How do you fill the silences? How do you address the silences about a story that this community has held in silence for so long and in denial for so long?”

Despite the devastation, the black community in Tulsa was able to rebuild on the ashes of its neighborhood, partly because Buck Colbert Franklin battled all the way to the Oklahoma Supreme Court to defeat a law that would have effectively prevented African-Americans from doing so. By 1925, there was again a thriving black business district. John W. Franklin says his grandfather’s manuscript is important for people to see because it deals with “suppressed history.”

For decades, there were no public ceremonies, memorials for the dead or any efforts to commemorate the events of May 31-June 1, 1921. Instead, there was a deliberate effort to cover them up.

The Tulsa Tribune removed the front-page story of May 31 that sparked the chaos from its bound volumes, and scholars later discovered that police and state militia archives about the riot were missing as well. As a result, until recently the Tulsa Race Riot was rarely mentioned in history books, taught in schools or even talked about.

Scholars began to delve deeper into the story of the riot in the 1970s, after its 50th anniversary had passed. In 1996, on the riot’s 75th anniversary, a service was held at the Mount Zion Baptist Church, which rioters had burned to the ground, and a memorial was placed in front of Greenwood Cultural Center.

The following year, after an official state government commission was created to investigate the Tulsa Race Riot, scientists and historians began looking into long-ago stories about the riot, including numerous victims buried in unmarked graves.

A 2011 retrospective published by the New York Times noted that the Tulsa riots were remembered largely due to efforts made in the 1990s and later, ensuring that the full scope of the barbarity did not remain absent from the history of the era and region:

The Tulsa race riot of 1921 was rarely mentioned in history books, classrooms or even in private. Blacks and whites alike grew into middle age unaware of what had taken place.

Ever since the story was unearthed by historians and revealed in uncompromising detail in a state government report a decade ago — it estimated that up to 300 people were killed and more than 8,000 left homeless — the black men and women who lived through the events have watched with renewed hope as others worked for some type of justice on their behalf.

The meme claimed that in 1921, a race riot in Tulsa claimed the lives of between 300 and 3,000 black people, and that the incident was deliberately elided from history books. Its claims were largely accurate, but the number of deaths was exaggerated. It is true that resentful white residents of Tulsa became enraged when they were prevented from lynching a man who allegedly stepped on a white woman’s foot. In the days following, white Tulsa residents rioted and destroyed a prosperous black community, Greenwood, killing between 50 and 300 citizens. Historians are largely in agreement that the 1921 Tulsa race riot remains underrepresented in historical texts.