Infodemik also shared the clip with a similar title on YouTube on October 5 2020. That same caption and emoji appeared on Twitter too:

The clip was also shared to r/ActualPublicFreakouts (and thedonald.win). On the AR15.com forums, the clip was shared with slightly different framing. A thread about the same footage blamed the events on Muslims, and that version came with the escalatory headline, “Religion of Peace violently disrupts toddler’s birthday party.”

On Reddit, commenters watched the video were quick to point out no part of it in any way indicated the dispute related to either Islam or Black Lives Matter protests; it showed a seated family arguing with two Black women attempting to disassemble their tables in what appeared to be an apartment complex’s courtyard:

“Blm as in 2 black people? Wtf is happening in this video?”

“Just because it’s a black person you relate it to BLM ? Despite the video having no relation to BLM ? I could guarantee if someone did the reverse as you did and formed a false political narrative about white people you’d throw a fit over it. By relating every negative thing a black person does to BLM you are essentially proving the whole premise of the movement. You are no better than they are if you spread misinformation and fake narratives.”

“Ok, who’s got the full story? I’m curious and I assume this has something to do with Covid rules.” 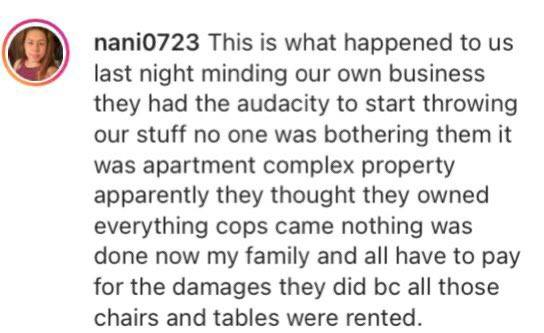 This is what happened to us last night minding our own business they had the audacity to start throwing out stuff no one was bothering them it was apartment complex property apparently they thought they owned everything cops came nothing was done now my family and all have to pay for the damages they did bc all those chairs and tables were rented.

As of October 6 2020, the account was set to private and the page redirected to a GoFundMe campaign related to the video.

A GoFundMe campaign under “Accidents & Emergencies” was started on October 5 2020 by an individual named Adrianna Moreno.

A video of the viral altercation appeared on the page, along with the following explanation for the campaign. We found it particularly noteworthy that the GoFundMe creator did not ascribe the altercation to Black Lives Matter in any way:

This is what happened to us last night [October 4 2020] while at a 3yr old birthday party minding our own business they had the audacity to start throwing our stuff no one was bothering them it was apartment complex property apparently they thought they owned everything cops came nothing was done now my family and all have to pay for the damages they did.

Commenters on the GoFundMe appeared to have found the campaign through “BLM destroys a child’s birthday party” posts, commenting:

“You’re way past your goal or I would have given more. Have a nice b-day party! Vote TRUMP 2020 and let’s get these kids back on the right track.”

“I hope the disgusting women who did this see how much money they helped you get with their actions. You deserve it for exposing them for what they are. #trump2020”

“Those whom disturb our peace shall not prevail. Trump 2020”

Moreno uploaded the video embedded with the GoFundMe campaign on October 4 2020 with the title, “Two women destroying 3yr old birthday party.” In an October 5 2020 reply to a user asking what the altercation was about, Moreno said:

We called the cops they just told us they can’t do nothing about it. They were mad bc of where the tables were set apparently they thought it was set on their property but they don’t own the complex so none of that was their property and that’s exactly what the police told them.

Other commenters appeared to have seen the clip shared elsewhere, and remarked:

“This is evil and insane. BLM mad they never had a bday party! Plz sue.”

“This right there.. its what BLM and the left stand for, Vote Trump 2020! Do not let the left take over or a birthday party would be the least of our concerns. Sorry that happen to you guys!”

Other commenters asked Moreno to provide more background about the altercation:

“Can you explain why this happened? I’m sure the two girls didn’t randomly starting breaking things. Why did they do it ???. What caused this issue. I’m not taking anyone’s side just trying to understand. Because you started a go fund me and already raised $2k and still havnt managed to tell the whole story. Help everyone understand so more people can help you.

“Also there are A LOT of racist comments from the doners of your go fund me. Maybe you should denounce that kind of speech somewhere in your description”

Although it was possible the GoFundMe was created by someone profiting off the video’s virality, it also seemed likely any such effort would leverage the “BLM destroys a child’s birthday party” framing seen in reposts of the footage. Further, Moreno’s YouTube video was the earliest iteration of the clip we located.

A video captioned “BLM destroy Hispanic child’s birthday party 😡” spread heavily on Facebook and other sites, but Moreno’s GoFundMe campaign and video did not mention Black Lives Matter (or Muslims) at all — and the video did not suggest in any way the altercation was related to the movement. In a reply on YouTube, Moreno stated the two women were angry because “apparently they thought [the table] was set on their property but they don’t own the complex so none of that was their property and that’s exactly what the police told them.” She in no way suggested the confrontation had anything to do with BLM, and the video only went viral after that unrelated claim was added to the mix by unknown disinformation purveyors.