UK Prime Minister Boris Johnson hid in a large refrigerator rather than speak to a member of the media.

The UK’s prime minister created an awkward moment for himself on live television on December 11 2019, just one day before the country’s high-stakes general election.

Footage of the episode shows Boris Johnson retreating into a freezer after he was approached by reporter Jonathan Swain and asked to give a live interview to hosts Piers Morgan and Susanna Reid: 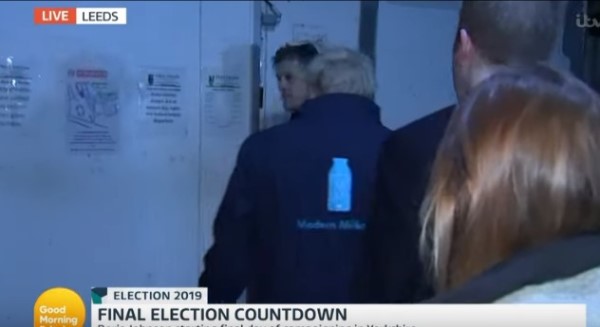 According to The Guardian, Swain made his pitch as Johnson was at a dairy in the town of Pudsey, stumping for votes by delivering milk to homes early in the morning.

The encounter, which unfolded on the final day of campaigning before the UK’s upcoming election, was not exactly an impromptu interview; earlier in the program Morgan and Reid told viewers they had heard about Johnson’s outing and said that they planned to give him a mock milk bottle, jabbing at both the prime minister and Labour Party leader Jeremy Corbyn for not appearing on their show:

“As a reminder, two months ago Boris Johnson promised to come on GMB to be interviewed by [Morgan] and [Reid],” the show said on its Twitter account. “Today is the PM’s last opportunity.”

That set up Swain’s first attempt to approach Johnson. As the camera focused on Johnson speaking to the owners of the dairy, Swain conceded that he was not initially scheduled to cover the prime minister’s appearance there.

“There tends to be accredited media for all the main party leaders, so therefore you can’t just sort of turn up like we have here this morning,” he told Morgan and the viewers.

“Swainy, shout at him,” Morgan respond. “Say ‘Come on Great Morning Britain, prime minister’ if you get the chance. Give him the full barrels.”

After that exchange, Swain approached Johnson asking him to come on the show. A man later identified as Johnson’s press secretary Rob Oxley turned toward him and cursed. Both Morgan — who has his own history of making off-color and outright misogynistic remarks both online and on the air — and Reid appeared shocked by the profanity.

At that point, Swain began following Johnson and his entourage around the dairy asking the prime minister if he would appear on the show.

“There is a look of panic on peoples’ faces,” Swain said at one point. Seconds later he approached Johnson again, saying, “Could you talk to Piers and Susanna?”

“I’ll be with you in a second,” Johnson replied.

As Swain was telling Johnson, “I have an earpiece here in my hand ready to go,” Johnson can be seen hurrying into the freezer. The camera then turned toward Swain, who began laughing.

According to The Guardian, aides have “closely controlled” Johnson’s press appearances since he was caught on camera pocketing an ITV reporter’s phone rather than look at a photograph of a sick 4-year-old boy sleeping on coats stacked on a hospital floor because beds at the facility were not available.

However, Johnson’s day continued to make news for the wrong reasons. After leaving the dairy, he was accused of staging an encounter with a woman when she was caught saying, “Oh I didn’t realize there was going to be this many people” after greeting Johnson at her door, giving the impression that the prime minister’s visit was not as spontaneous as news outlets were led to believe.

Update, 2:58p.m.: This story was updated with a note about Johnson’s “spontaneous” visit with a voter after leaving the dairy. — ag