Image shows a campground sign "translated for teenagers" in August 2021.

On August 9 2021, a Facebook post depicting a campground’s “text us” sign and a “teenager translation” went viral; iterations of the image were popular across social media: 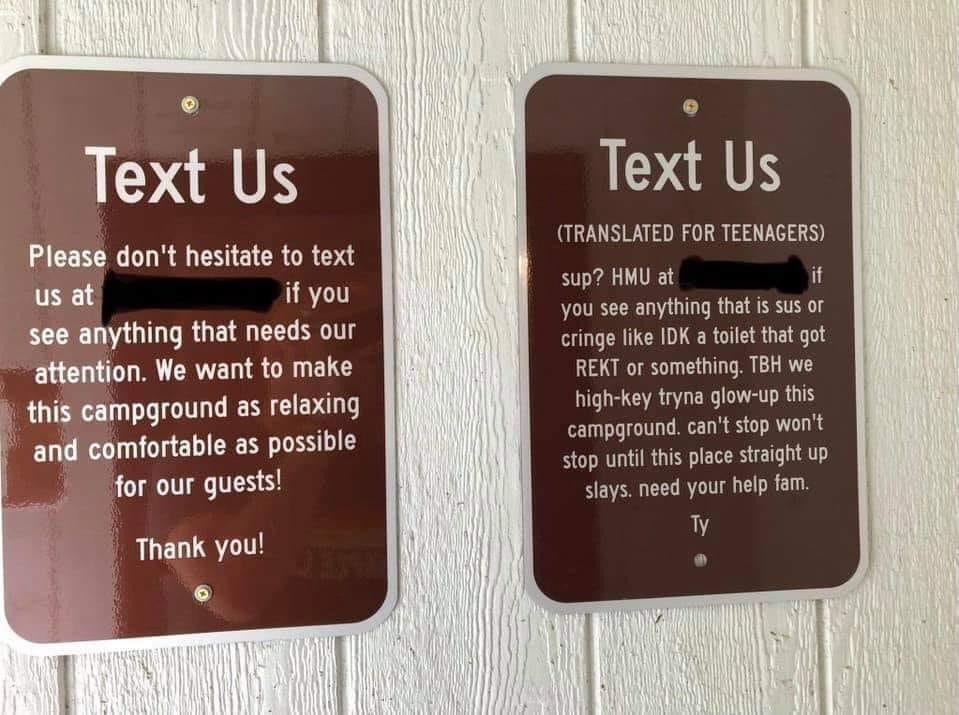 Every variation of the images of the signs we were able to locate included the masking over the phone number, making it difficult to trace the location of the purported signs. The version in the picture on the left read:

Please don’t hesitate to text us at [redacted] if you see anything that needs our attention. We want to make this campground as relaxing and comfortable as possible for our guests!

Whereas a visually identical version on the right side of the image read:

sup? HMU at [redacted] if you see anything that is sus or cringe like IDK a toilet that got REKT or something. TBH we high-key tryna glow-up this campground. can’t stop won’t stop until this place straight up slays. need your help fam.

Before the image appeared on Facebook on August 9 2021, it was shared to Imgur (“I’m glad they translated this for us grownups”) and Reddit’s r/Cringetopia:

Another iteration on that day appeared on Twitter, where the image was dually meme-d to reference youth pastors:

Extensive searches for signage at Tallulah Gorge State Park failed to return any other versions, and the redacted phone number kept us from matching the two. The signages’ white lettering on a brown background was visible in user-submitted images of Terrora Campground in Tallulah Falls, Georgia — but we couldn’t find the image among those submissions.

The earliest variation on the sign we found was shared by Tumblr u/oysters-aint-for-me on August 8 2021, alongside a caption reading “my brother sent me these two signs from a campground he’s staying at and i just …”:

No additional information about the location was included in that post, and none of the iterations we found provided a source for the exact same image.

A photograph of a campground’s language on a sign purportedly “translated for teenagers” spread virally on Facebook, Imgur, Twitter, Reddit, and sites like 9Gag. The sign advised “teenagers” to “HMU … if you see anything sus or cringe like IDK a toilet that got REKT”; presumably identical phone numbers on both signs were elided. The image appeared to originate with a Tumblr user’s August 8 2021 post, but we were unable to locate additional iterations of the sign before that date, nor could we confirm the suggested “Tallulah Gorge State Park” label was accurate.