A new Facebook Mobile feature automatically reports posts via shaking your phone, causing false reports when you walk with your mobile in a pocket.

In June 2019, a number of Facebook posts popped up warning mobile users of a purported new mobile feature in which shaking a phone with the social media platform’s mobile app open could lead to automatic reporting of posts (and, readers surmised, unwittingly sending friends to “Facebook jail”):

The most commonly shared variation of the post above claimed:

Your public service announcement for today:

The recent FB update added this new feature for mobile fb users. Since this update – some people have landed in FB jail multiple times (yes, it’s a real place and there’s no fair trial or bail out options! 🤦🏻‍♀️) One has been in & out for over a week now 😰 It seems many of us are accidentally ‘reporting a problem’ and getting our friends thrown in jail. 😲

How can you fix it? 🤔
When you’re in FB, shake your phone around until this shows up. Then slide that ‘shake phone to report a problem’ button to OFF!

It’s CRAZY that none of us knew this had been added and that it was automatically ON with the update. 🤷🏻‍♀️

This is no joke shake your phone! Not fast or hard. I just removed mine.

Per user reports, the “shake to report” feature was generated on both Apple and Android devices, and the function could be disabled. The screen seen when users shook their phones did not generate a “report content” screen, but rather a “something isn’t working” screen. 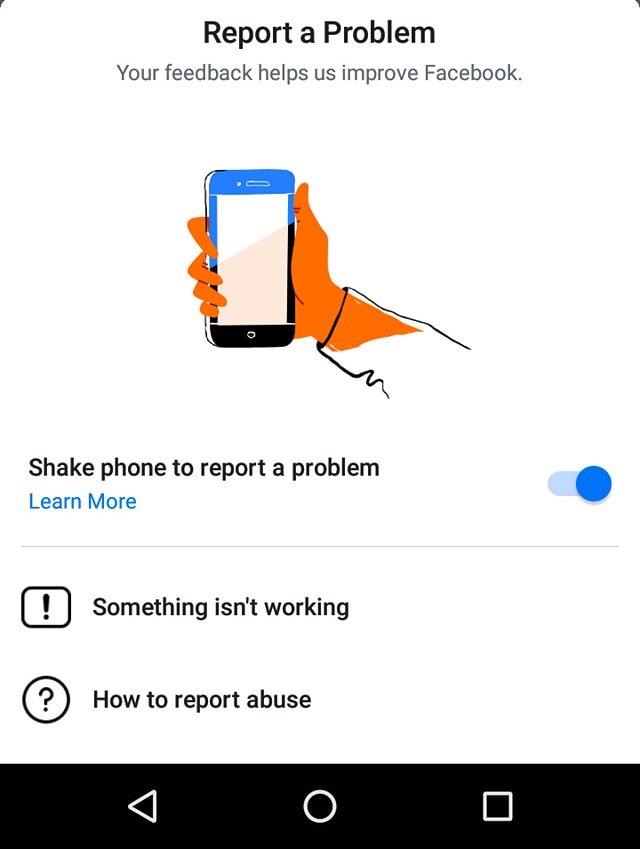 Engadget reported the feature on May 28 2019, but that article said the feature was for bugs rather than potentially objectionable content:

Facebook wants to make reporting bugs as easy as shaking your phone. In fact, that’s all you’ll have to do. Thanks to a new feature, when you encounter a bug, you can simply shake your phone and file a report through a pop-up menu that will appear on the screen.

The second portion of warnings about the “shake to report” was that it has purportedly landed some people in “FB jail multiple times” due to what could only be described as “butt reporting” — that is, the app misreading the motion of the device in a pocket. But the trajectory of putative inadvertent reports was unclear, and we were unable to locate any complaints from people who had been suspended from Facebook (colloquially known as being sent to “Facebook jail”) because of the new feature. It seemed unlikely that reporting something “wasn’t working” (i.e., a bug) would cause inadvertent suspensions from Facebook.

Facebook mobile’s “shake to report” feature is real, but rafts of users being sent to Facebook jail over the feature was highly unlikely given it was intended for reporting bugs, not people. Overall, the feature was designed to report that “something isn’t working”, not necessarily actionable content.