Wish.com ships all products from Wuhan, China, and Wish.com products might cause you to contract coronavirus.

As concern over coronavirus spread in late January 2020, Facebook users began to share memes claiming that all products from ubiquitous seller Wish.com shipped from Wuhan, China — thought to be the region from which a massive outbreak of what epidemiologists are calling 2019 novel coronavirus (or 2019-nCoV) originated: 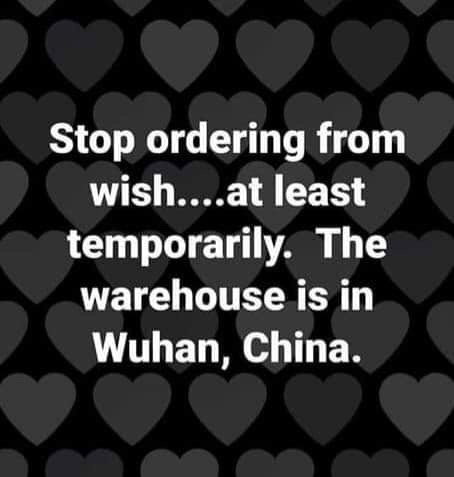 One widely screenshotted and shared iteration of the meme seen above featured white text against gray hearts on a black background. It read:

Stop ordering from wish….at least temporarily. The warehouse is in Wuhan, China.

On January 26 2020, as the meme about Wish.com spread, news organizations like CNN reported on the rapidly evolving situation in Wuhan and beyond (“China goes into emergency mode as number of confirmed Wuhan coronavirus cases reaches 2,700”):

The death toll from the Wuhan coronavirus now stands at 80 [on January 26 2020], with almost 2,800 cases confirmed across China, as the country initiates emergency procedures to try and rein in the pathogen’s global spread … Wuhan itself has been effectively quarantined, with all routes in and out of the city closed or highly regulated. The government announced it is sending an additional 1,200 health workers — along with 135 People’s Liberation Army medical personnel — to help the city’s stretched hospital staff.

On the same day, CNN reported five confirmed cases of Wuhan coronavirus in the United States; all five patients had apparently recently returned from Wuhan. Those cases were in the state of Washington, Arizona, California’s Orange and Los Angeles counties, and Chicago, Illinois.

Wish.com is both widely advertised on Facebook and known for the number of humorous suggested novelty items appearing in users’ feeds. The meme claimed that Wish.com’s “warehouse” was specifically located in Wuhan, but that wasn’t entirely true.

Some products from the Wish.com marketplace ship from various Chinese factories, and some ship from the United States. Others ship from different countries:

In exchange for these bargains, Wish demands patience. Most delivery estimates range from two to four weeks, giving the marketplace’s vendors time to ship their products from countries like China, Myanmar, and Indonesia. And apparently, even in the age of free one-day shipping, patience is a thing a shockingly large number of people still have.

… By the time it launched e-commerce, it had 500,000 daily users, Wish’s co-founder and CEO Peter Szulczewski told All Things Digital at the time. Its biggest vendors were Chinese wholesalers, and as the company grew, it directed its efforts toward the products that were selling fastest: inexpensive women’s clothing, consumer electronics, jewelry, and accessories — all of which are still among Wish’s top-selling categories. (The company also now has four category-specific apps — Geek, Home, Mama, and Cute — but says they aren’t a significant part of the business.)

According to that June 2019 reporting, Wish.com’s warehouses were both based in and shipping to various countries:

[In June 2019], according to Marketplace Pulse, 87 percent of the app’s 1 million active merchants are based in China, with an additional 7 percent in the US, and less than 1 percent in the UK and Canada. The company doesn’t break out the geographic distribution of its sellers or its customers, but says the US is its largest market (according to Recode, American customers account for 30 percent of its sales), while Europe does more sales overall.

It has been able to maintain its rock-bottom prices thanks in part to a 2011 agreement between China Post and the US Postal Service that sets special rates on shipments from China weighing 4.4 pounds or less. It often costs less to ship these “ePackets” across the ocean than it does to ship a small parcel from one state to another, making already-inexpensive Chinese-made products look even more attractive to American consumers.

That was China as a whole, not Wuhan specifically, and we were unable to turn up any information suggesting that Wish.com vendors were primarily or even partially based in Wuhan. In general, large cities like Beijing, Shanghai, and Shenzhen are commonly home to many e-commerce warehouses.

A March 2019 Forbes piece reported that Wish.com co-founder Danny Zhang oversaw three outposts in China. A 2015 Recode article about the early days of Wish.com noted the same outside-the-United States shippers were not exclusive to Wish, and often found selling on Amazon and eBay. (Wish.com itself is headquartered in San Francisco, but we were unable to find a media contact listing.)

As for the coronavirus, it is typically but perhaps not exclusively spread from contact with people (not surfaces.) It remains unclear how long it might live on surfaces:

Coronaviruses “primarily spread through close contact with another individual, in particular through coughing and sneezing on somebody else who is within a range of about 3 to 6 feet from that person,” said Dr. Kathy Lofy, a state health officer for Washington, where the patient with confirmed coronavirus has been hospitalized.

If an infected person sneezes or coughs onto a surface — a countertop, for example — and another person touches that surface and then rubs his or her eyes or nose, for example, the latter may get sick.

It’s still unclear, however, how long the virus particles for this new coronavirus can live on surfaces.

What’s more, it’s unknown at what point a person with the virus becomes contagious. Health care workers are operating under the assumption that the incubation period for the illness is about 14 days, meaning that it takes roughly that amount of time for symptoms to show up after a person is infected. Scientists still do not know whether a person is infectious during the incubation period.

Many different types of viruses can cause colds. The viruses can sometimes survive on indoor surfaces for more than 7 days. In general, viruses survive for longer on non-porous (water resistant) surfaces, such as stainless steel and plastics, than porous surfaces, such as fabrics and tissues. Although cold viruses have been shown to survive on surfaces for several days, their ability to cause an infection reduces rapidly and they don’t often survive longer than 24 hours.

Overall, the shorter windows seem to be the most accepted:

Most viruses that cause colds and flus remain contagious on non-porous surfaces like computer keyboards longer than porous surfaces like fabric and Kleenex … Because common colds are caused by a plethora of viruses, research on surface infectious rates are harder to nail down. In general, most are no longer dangerous after 24 hours, and their ability to infect dissipates faster on porous materials like facial tissues.

What’s the best surface for killing viruses? Our skin. In the cases of both flu and cold-causing viruses, infectious particles on our hands are usually gone after 20 minutes.

Although reporting on Wish.com often indicates waits of “weeks or months,” China Post suggests a slightly shorter window for most deliveries from China to the US:

China Post has an agreement with the postal service of United States (USPS) and usually you will receive your shipment in your American address by USPS within 9 to 12 days using ePacket. You must insist the seller make ePacket shipping, otherwise it would take 60 to 80 days to arrive for service regular China Post.

Stories about coronavirus and Wish.com’s purported location in Wuhan were not the only sinophobic rumors circulating around the outbreak, many of which seemed to be fueled by nothing but xenophobia:

Seeing a lot of this kind of thing now in response to the emergence of the Wuhan coronavirus. You may have run across viler tweets denigrating and misrepresenting China and its varied cuisine, but this one is old and, sadly, widespread across North America and parts of Europe. pic.twitter.com/du0os3X4KW

Although it is true that Wuhan, China was the location of an early outbreak of coronavirus, claims that Wish.com’s warehouse is there were baseless. Wish.com was a marketplace of sellers with shippers in many locations in China and elsewhere; Amazon and eBay items sometimes shipped from China, as well. Even if package handlers were infectious, the longer shipping time for items from China to the United States or Europe meant the risk was still low. However, Wish.com was not located in Wuhan, and the rumor capitalized on outbreak fears.